This 4-Ingredient Beet Smoothie is refreshing and massively nutritious. In addition to the beets, it’s got grapefruit and a couple kinds of veggies, so it’s not especially sweet, but the flavors are balanced nicely. Nutrition-wise, it’s loaded with vitamins and helps get more oxygen throughout the body. 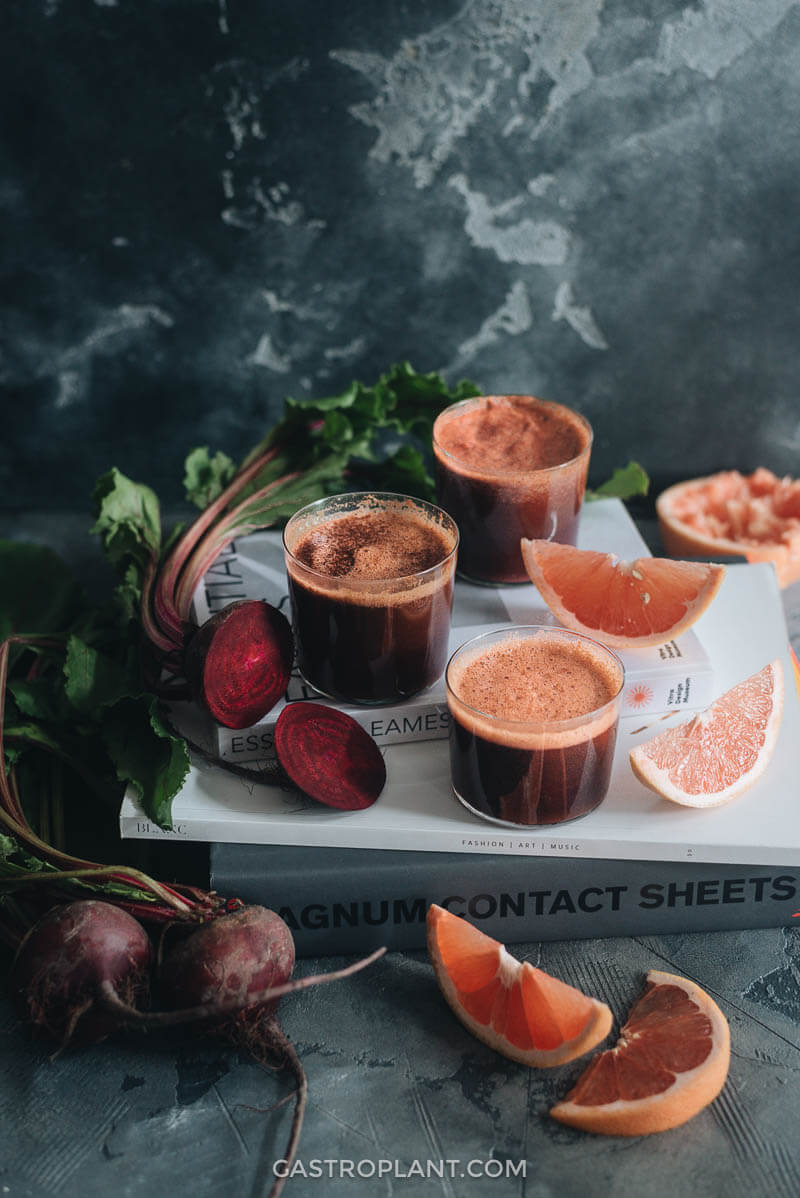 The inspiration for the 4-Ingredient Beet Smoothie

I encountered a beet juice blend recently, marketed as a heart-healthy choice. In addition to the beets, that juice contained grapefruit, several vegetables, and raw garlic. Not kidding. I know garlic is heart-healthy, but that stuff was INTENSE. Though I did enjoy the juice and felt great after drinking it.

I wanted to capture the essence of that juice (minus the garlic) but also simplify it and make it into a smoothie. The core of that juice was beets, grapefruit, and greens – these flavors work really well together and you mostly taste the beet and grapefruit. I added celery because of its high water content and refreshing grassy flavor. Instead of using several greens, I used kale for its high vitamin content. 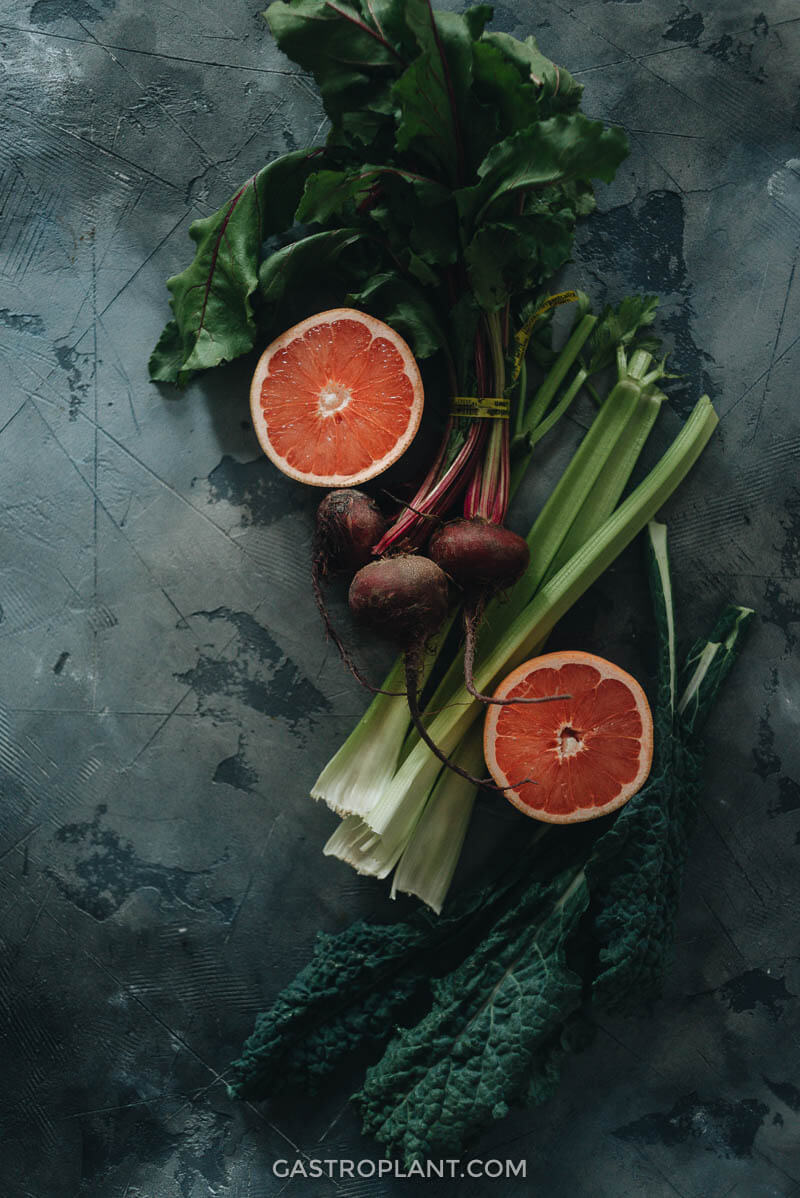 The benefits of beets

Beets are rich in antioxidants, vitamins, and other nutrients and their benefits are well documented. I got turned on to them as a fitness aid by a vegan bodybuilder I follow. He touted their ability to dramatically improve blood flow due to their high concentration of nitrates. (The word “nitrate” may cause some distress, as the nitrates in deli meats may be carcinogenic; beets do not contain those nitrates.) The nitrates in beets help the blood vessels to relax, which lowers blood pressure and allows more oxygen to be transported throughout the body.

My experience with beets

There have been studies done on beets as a performance enhancer, which generally confirm that they can make a small but meaningful impact in performance. I put this to the test over the course of a week as I worked to develop this recipe. My study was not a formal scientific one, and I admit that I am at least someone susceptible to the placebo effect, but my running training times were measurably faster with beets than without. In two workouts during “beet week” I posted personal records in the mile and the 5k distances. By that, I mean that I ran those distances faster than I ever have in my life. Prior training certainly takes most of the responsibility for that, but the beets, at the very least, gave me a useful psychological boost. I’ll continue to drink beets and see where they take me. 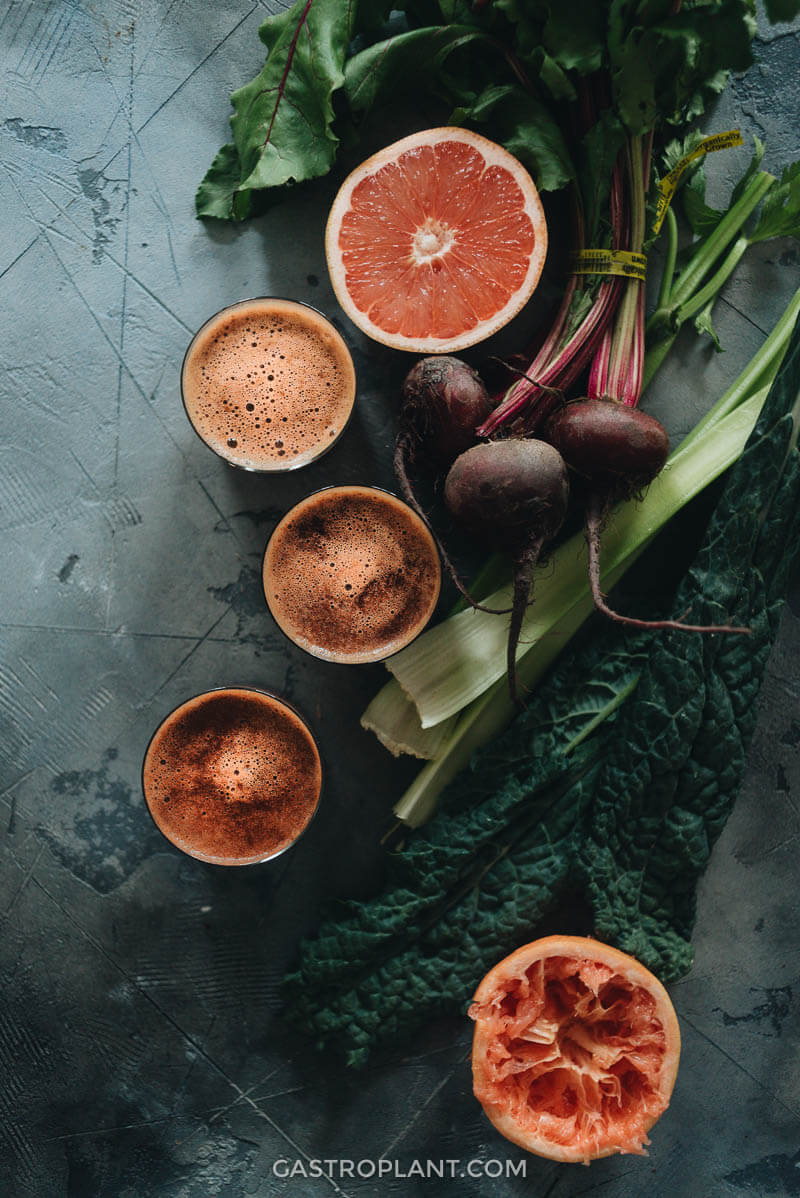 I think the smoothie is still worthwhile. Beets have benefits beyond performance and are helpful for all-around health. And the smoothie is tasty enough, with the grapefruit and veggie flavor, that I’d drink it the way I’d drink any veggie smoothie.

Anything I should know before making the 4-ingredient beet smoothie?

Be sure to clean and peel the beets well before chopping and blending them. It’s not nice to encounter dirt grits in your smoothie.

You can include some raw garlic in the smoothie if you really want to. I wouldn’t recommend more than half a clove per batch. There are easier ways to get your fill of garlic.

You can substitute other greens for the kale, such as spinach or chard.

I found that beet greens actually work quite nicely, flavor-wise, as they’re pretty mild. And they make for a redder final color than does kale. Feel free to skip the kale and just use the raw beet greens if your beets come with greens attached.

The smoothie will keep for up to 3 days in an airtight container in the fridge. Be careful when working with beets, as they can stain cloth, plastic, wood, stone, and other surfaces. Don’t keep the smoothie in your blender bowl longer than it needs to be there, and rinse the bowl as soon as it’s empty. Glass containers are your best bet. 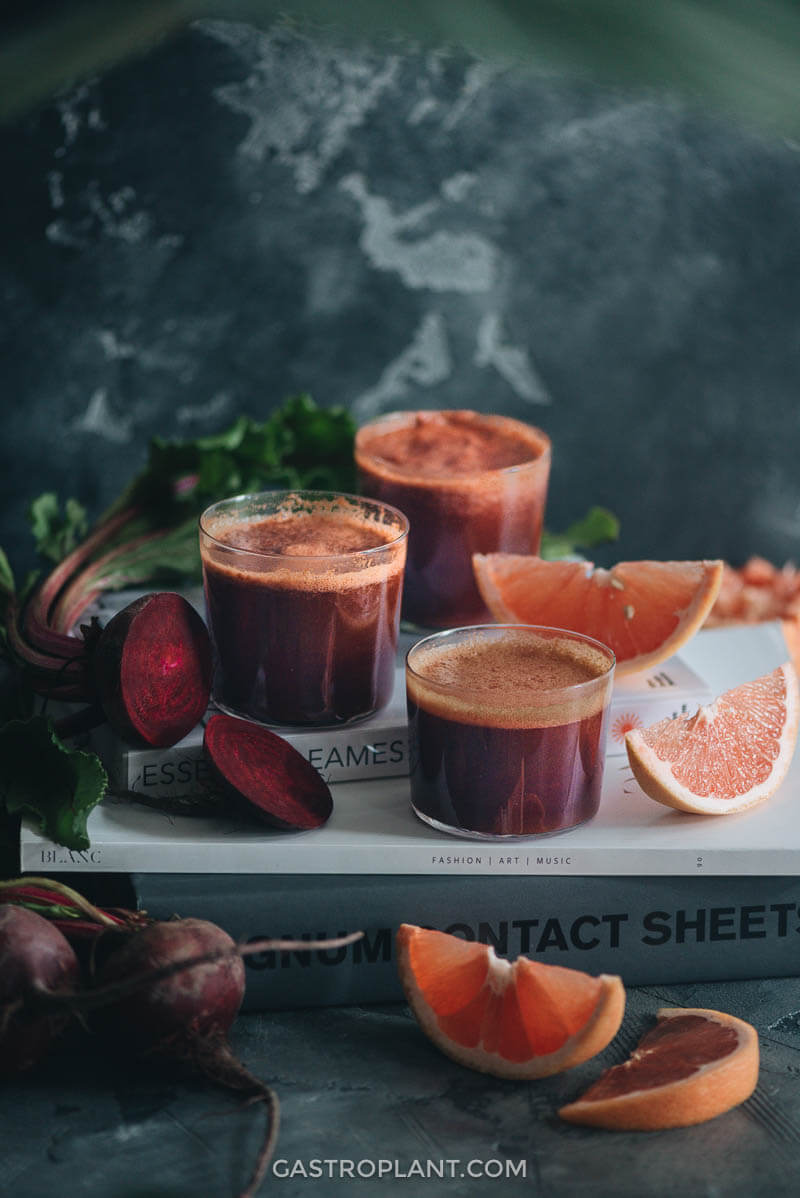 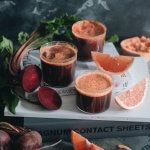 It’s refreshing and massively nutritious. In addition to the beets, it’s got grapefruit and a couple kinds of veggies, so it’s not especially sweet, but the flavors are balanced nicely. Nutrition-wise, it’s loaded with vitamins and a compound that gets more oxygen throughout the body.
Prep Time5 mins
Cook Time1 min
Total Time6 mins
Course: Drinks
Cuisine: American
Servings: 2
Author: Thomas

The smoothie can be kept in an airtight container in the fridge for 3 days. Be careful of beet stains on clothes, cutting boards, countertops, and blender bowls. Don’t leave beets on surfaces longer than they need to be. Be sure to clean and peel beets thoroughly before use. Since beets vary so much in size, their measurement is given by weight. The weight given is the weight once cleaned and peeled. You can substitute beet greens for the kale if your beets have greens attached.