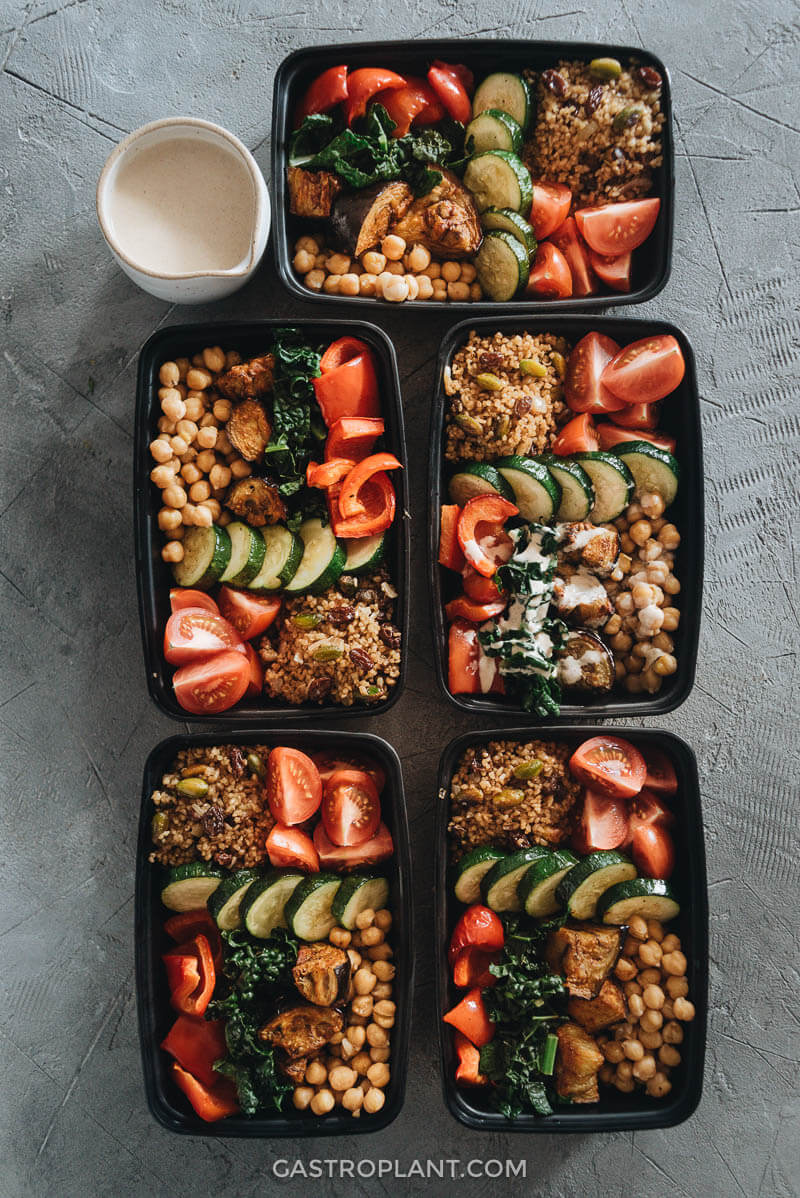 As far as global cuisines go, Mediterranean is one of the best in terms of its array of delicious, fresh, (and inexpensive) plant-based foods. I know I’m over-generalizing by using the term “Mediterranean”,  a word sometimes used to describe food in Greece, Turkey, the Levant, North Africa, and the Arabian Peninsula. But, thanks to the Ottoman Empire and its proliferation of the best foods within its bounds, these places do share a lot of culinary customs. Ingredients such as olives, legumes, eggplant, peppers, and grapes are used extensively in all these places. And some of my favorite foods – hummus, baba ghanoush, flatbread, and tabbouleh (or variants thereof) can be found in many of these places.

Even before I started eating plant-based I was really into Mediterranean veggie dishes. One of the dishes I would make to procrastinate on my undergraduate studies was stuffed grape leaves. I made hummus using an immersion blender. And I would load up on falafel and salad for a cheap and filling meal. At a time when I was tempted to season food as heavily as possible, for maximum intensity, I found that a light, simple seasoning of lemon juice and tahini on fresh ingredients could be equally satisfying. 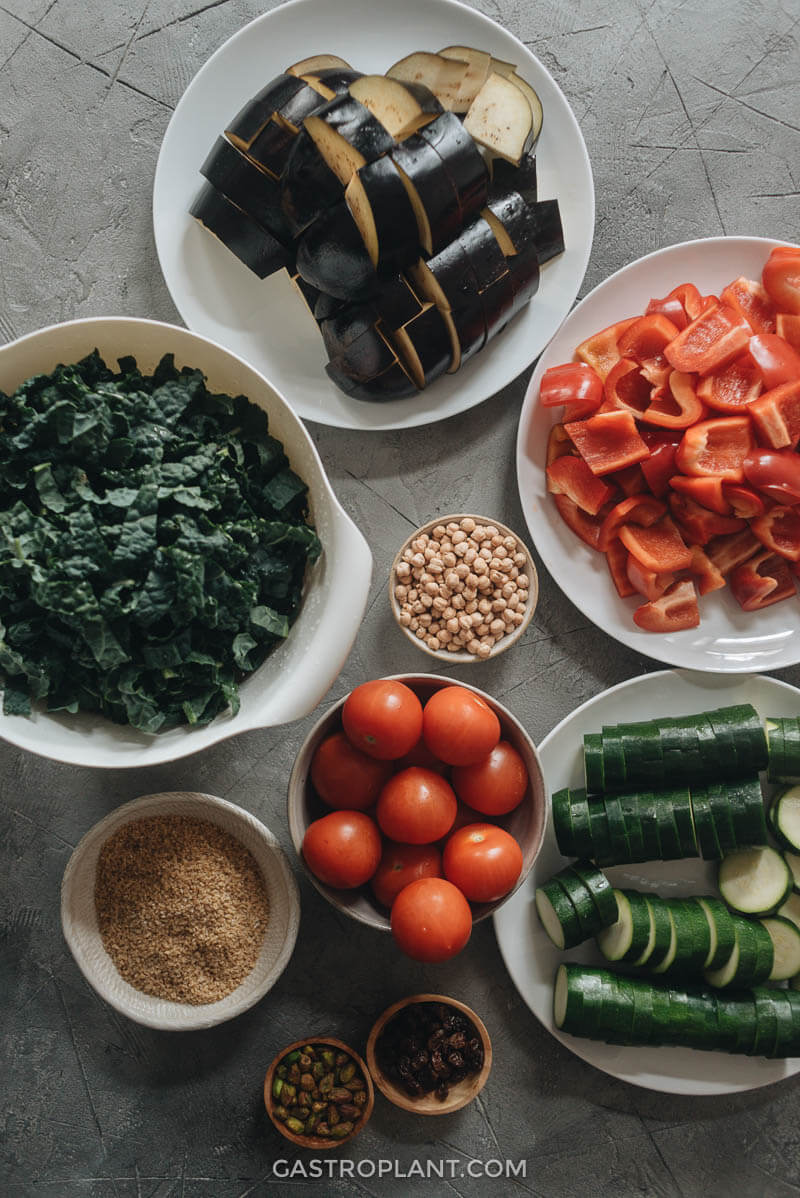 When I was coming up with this recipe, I had a few different goals. I wanted to make sure that there was a lot of diversity of flavor and texture, as well as a fair representation of the elements of Mediterranean cuisines. At the same time, I wanted to keep it simple and as homemade as possible and avoid ingredients that are uncommon.

The most complex component of the recipe is the bulgur pilaf. The bulgur is sauteed with onion, garlic, and spices and simmered briefly with raisins and pistachios. The fragrance of the spice is noticeable but not overpowering and there are a few different textures to enjoy.

If you’re not familiar with bulgur, it is a type of whole-grain wheat. It has been parboiled (i.e. partially precooked), so it doesn’t take long to cook. The texture is like rice, but a bit chewier and less starchy. It contains almost as much protein and more fiber than quinoa and is a versatile whole grain to keep on hand. 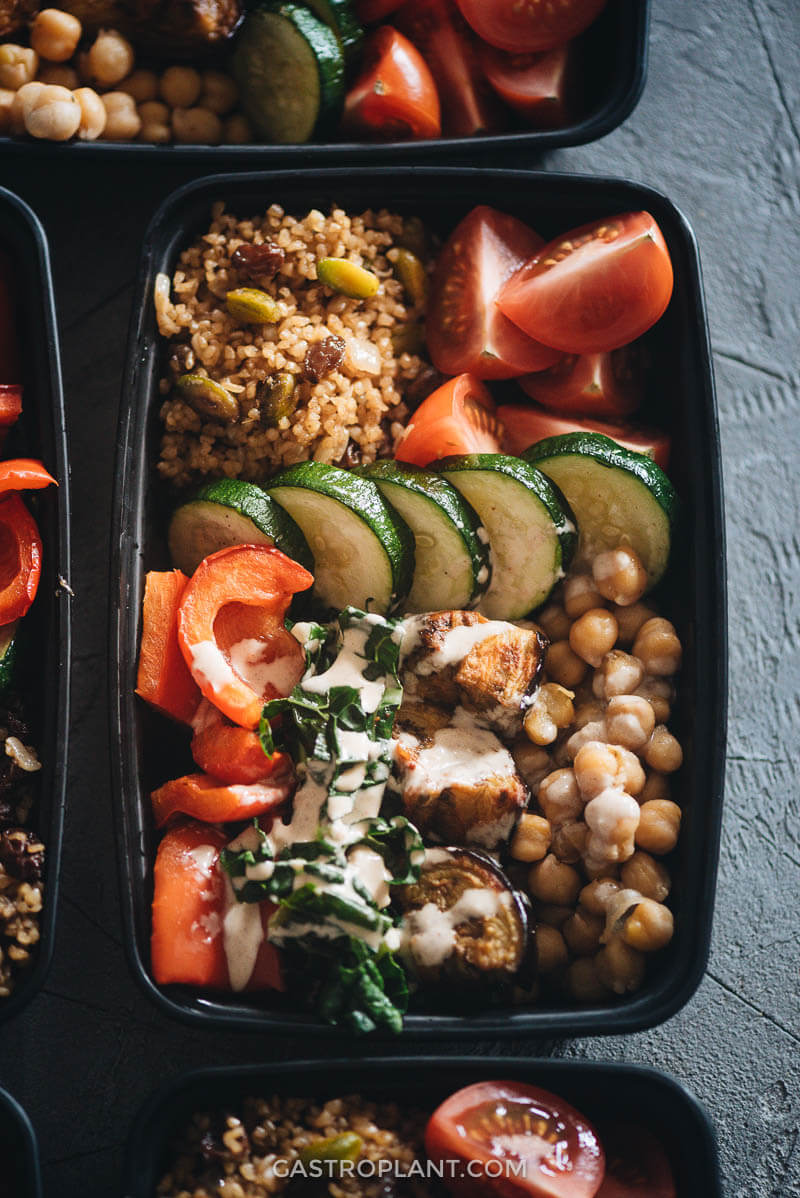 While there are a number of really delicious Mediterranean dishes that are made from roasted veggies, including baba ghanoush and muhammara, I stuck with the simple roasted veggies themselves. Tender roasted eggplant is dusted with smoked paprika to create a similar flavor as baba ghanoush made from smoky fire-roasted eggplant. Red peppers are roasted until blistered to release their inherent sweetness. And the zucchini slices are cooked until just tender, to provide a refreshing counterbalance to the other flavors.

The roasted veggies are cooked all at the same time (though not for the same duration) to simplify the process. The eggplant takes the longest, and the pepper and zucchini should take about the same amount of time.

Alternatively, you can roast the veggies in the air fryer if you’d like to make smaller batches. Or if you don’t have access to an oven (like me).

Chickpeas, kale, and tomatoes make up the rest of the ingredients in the bowl and their preparation is extremely simple. The chickpeas just need to be heated and seasoned. The shredded kale is briefly steamed in the microwave and seasoned with a splash of vinegar. The tomatoes are just sliced tomatoes.

I like tahini by itself, but wanted a dressing that captures a bit more range of flavor, so I added lemon, garlic, and cayenne. It makes a good all-purpose dressing for any sort of veggies and adds a bit of fat and protein, as well. 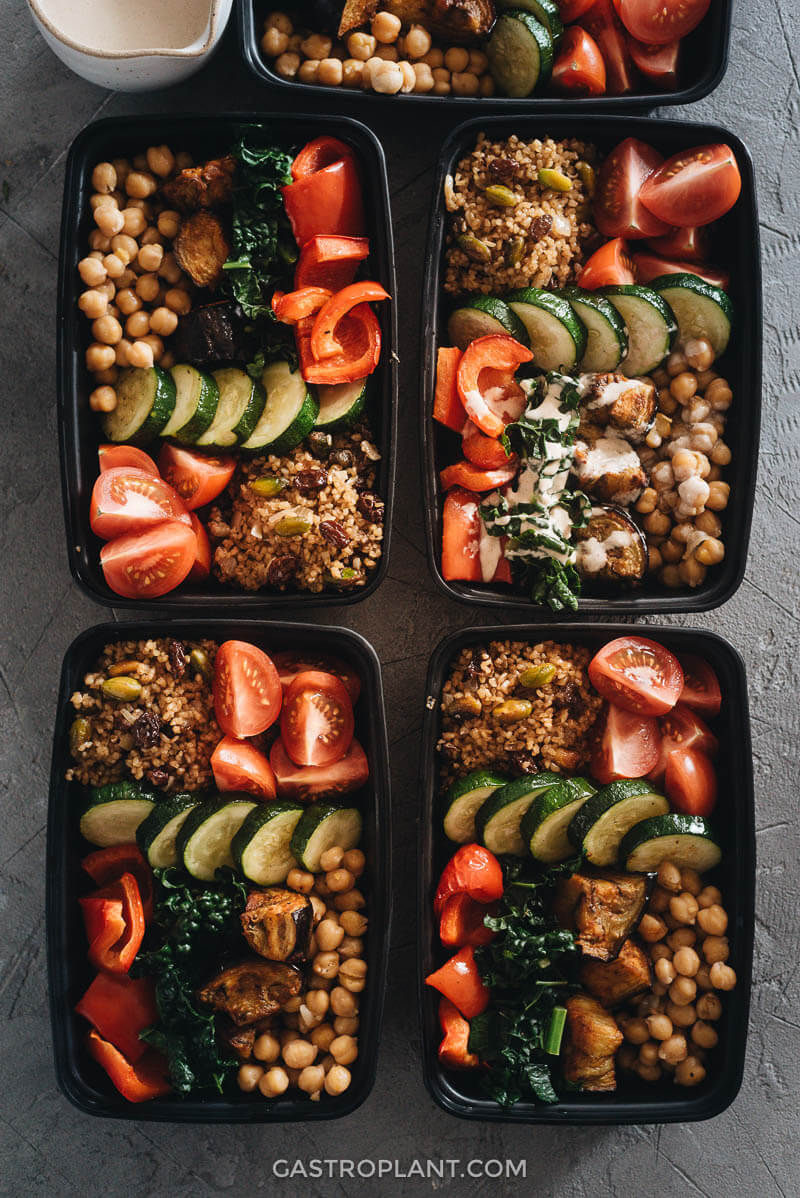 Prepackaged hummus, baba ghanoush, and tabbouleh are available at lots of grocery stores.

Canned artichokes and hearts of palm, too.

Roasted red peppers can be bought in jars.

Pickled veggies, including onions, carrots, and peppers can be delicious, but check the salt content before you buy (some are absolutely loaded with it)

You can substitute other greens for the kale. If you’re using spinach or a salad mixture, you don’t need to cook them.

You can substitute couscous for the bulgur and use all the same seasonings, though you’ll need to follow the instructions on the package around the amount of liquid needed. 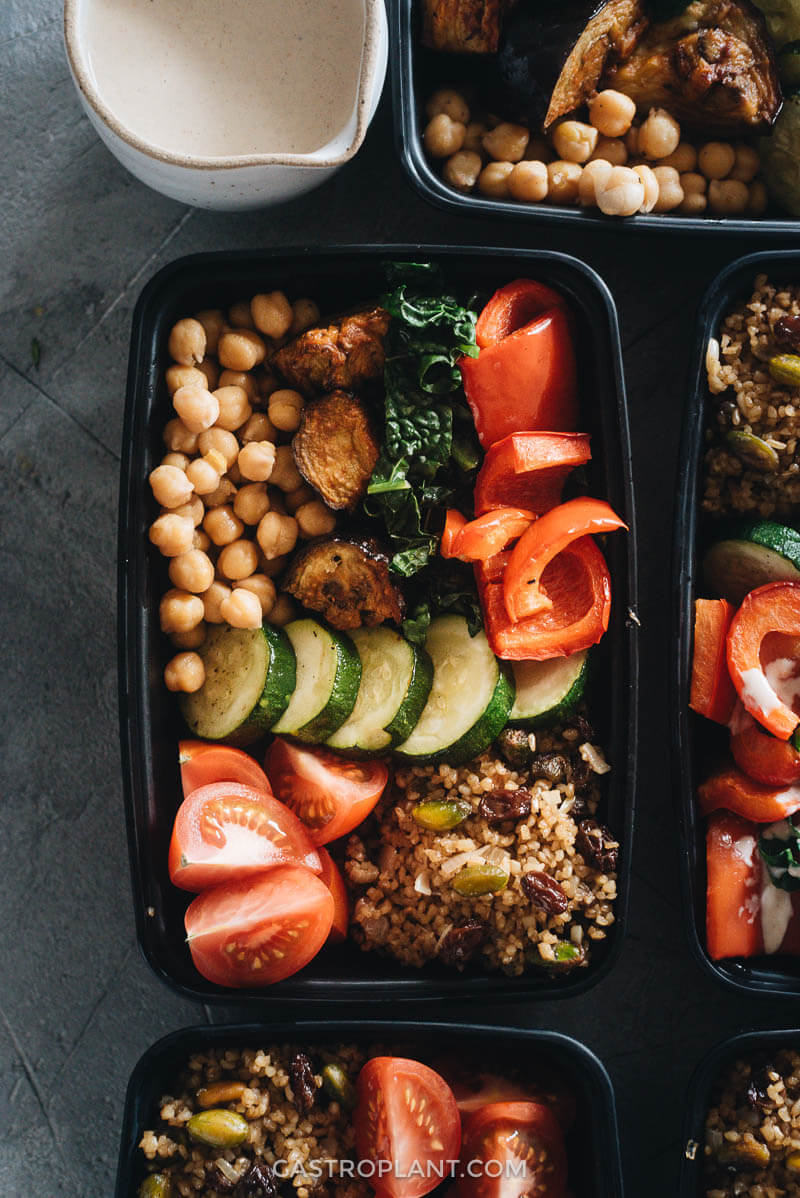 You can eat the prepared meal prep portions cold or reheat them. They’re delicious both ways. The dressing will be very thick when chilled and it may be easier to work with if gently heated.

If you reheat a portion, you may want to set the kale and tomato aside. The kale could risk becoming overcooked (and bitter) and the tomato could lose its freshness. I’ll leave that up to you.

If you’re curious about my other meal prep recipes, see my Japanese Buddha Bowl Meal Prep and my Meal Prep Page (to be updated) 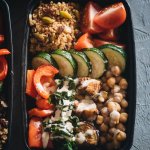 When making the sauce, take note of the composition of the tahini. It can include a lot of solid or a lot of liquid, and this will affect the flavor and texture of the sauce. Stir the tahini well before spooning it out of the container and pay attention to the consistency as you mix water into the sauce, so that you don’t thin it out too much. The sauce will thicken significantly when chilled. Warming the sauce (or the whole meal prep bowl) will help thin out the sauce.