This Creamy Vegan Mushroom Pasta features a sauce that is intensely creamy with a full-bodied mushroom flavor. The recipe uses cashews, almond milk, and dried mushrooms to create a very satisfying plant-based sauce. 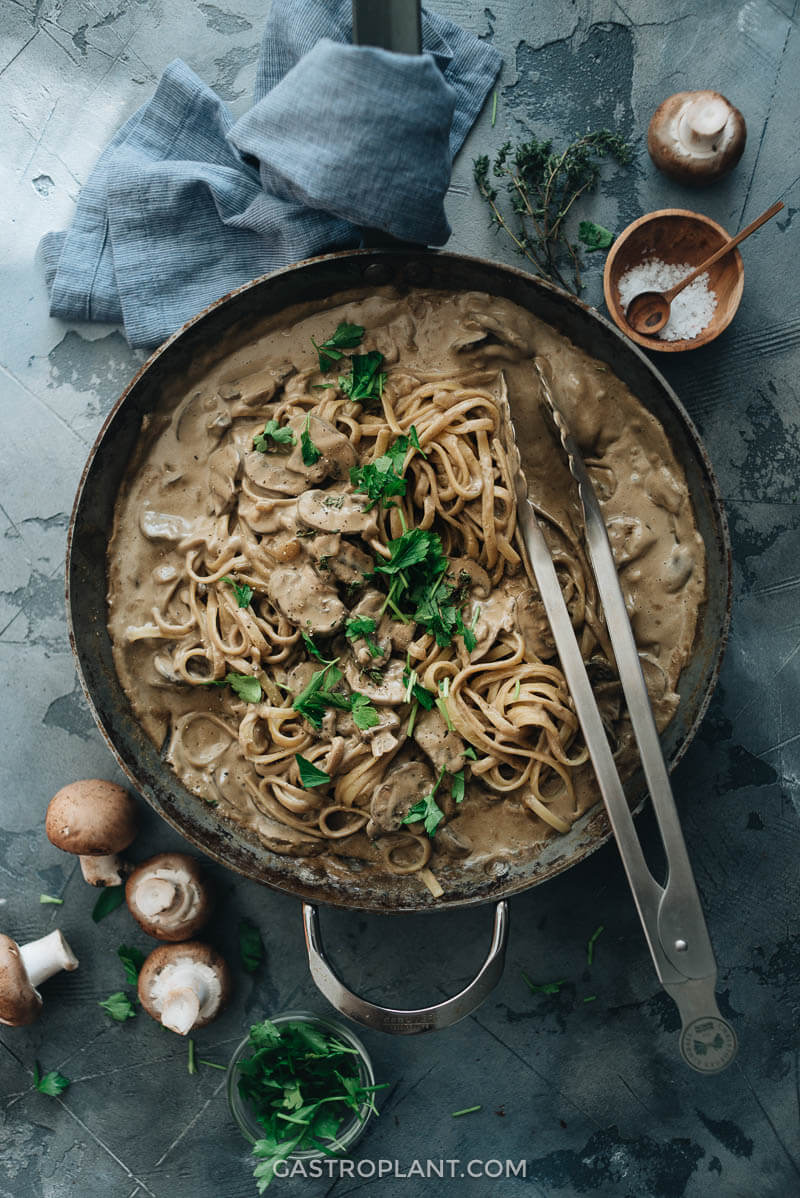 I was introduced to cashew cream in a pasta sauce by The Happy Pear, in their creamy mushroom pasta recipe. They run a very impressive venture that promotes nourishing plant-based eating in a number of different ways, including recipes. And the “pear” themselves (identical twins Dave and Steve) are very entertaining and exude lots of positive energy. I highly recommend checking them out.

Over the past several months I’ve been cooking their mushroom pasta, experimenting and tweaking each time. The original recipe is very simple and straightforward and also oil-free. If those aspects interest you, please do consider their recipe. I eventually made several enhancements to it in order to get a richer and more full-flavored sauce. 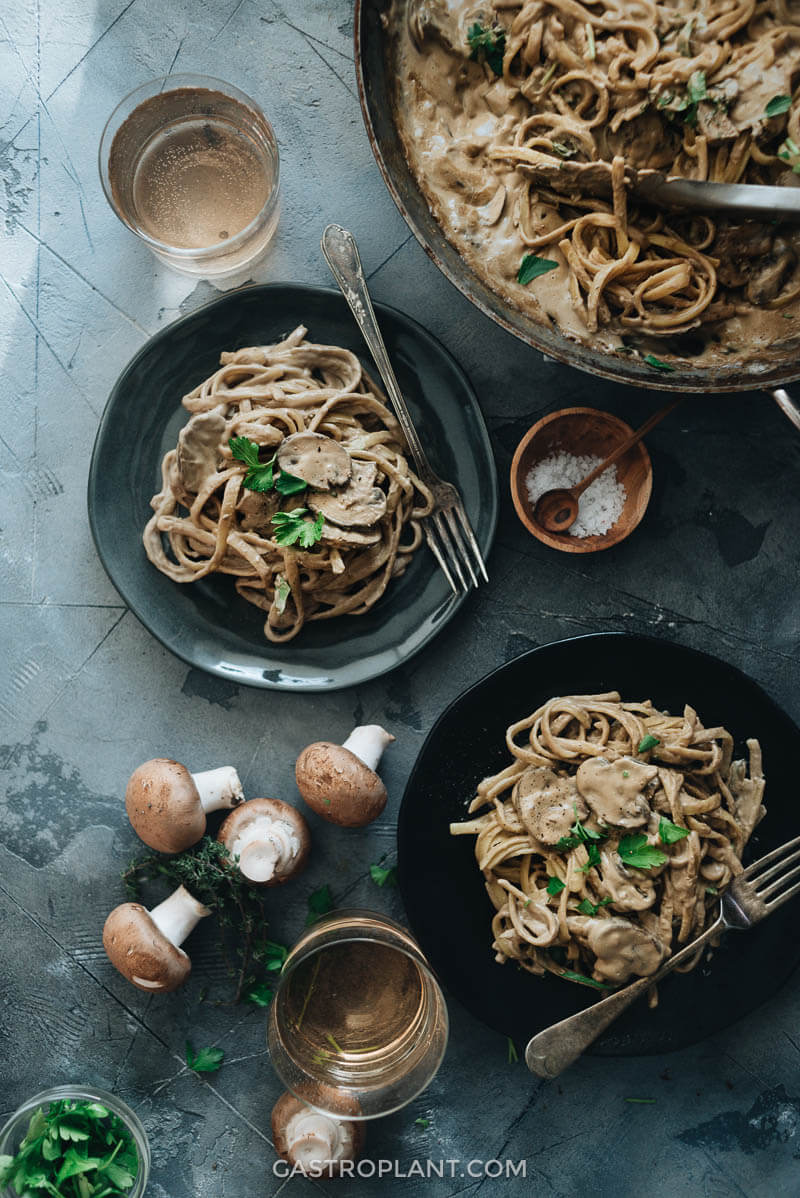 Making the sauce my own

I generally enjoyed the sauce in the original recipe but felt that it could be made richer with not too much more effort. Since the two major things I added, dried mushrooms and nutritional yeast, end up going in the blender, it isn’t much more work to add them. And they make a tremendous difference in the flavor of the sauce.

Other tweaks I made include swapping the lemon juice for vinegar and adding sherry. You can use either lemon juice or vinegar, but it’s important that you have one of those. The benefit you get from the acidity of either ingredient cannot be understated. Sherry can make any cream sauce pop. Just a splash adds another layer of flavor that is perfect with the mushrooms.

The usefulness of cashew cream

The cashew cream at the heart of this sauce impressed me so much that I started to experiment with it in other contexts. I developed a creamy tonkotsu ramen broth and enchilada filling with it. I’m planning to make more pasta sauces, definitely a cream of mushroom soup, and maybe even desserts with it. It is very versatile and you can expect to see it in many more recipes to come. Let me know if you have any suggestions in the comments! 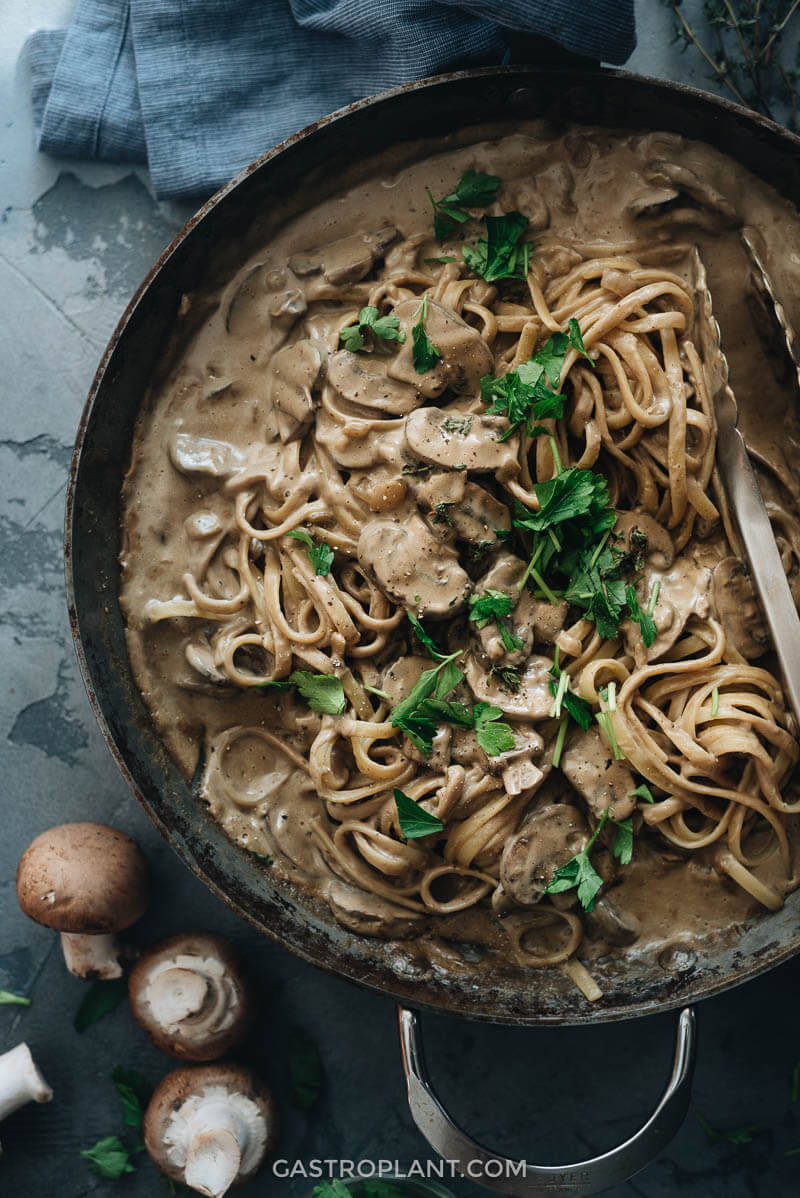 The cooking process for the Creamy Vegan Mushroom Pasta

This one is pretty straightforward. Boil the pasta in salted water, drain it, and set it aside. Saute onion, garlic, and mushrooms in olive oil. Blend several ingredients to make a cashew cream. Mix the cashew cream in with the sauteed mushrooms. Stir in the pasta. Eat.

The recipe requires a high-speed blender for the cashew cream.

In the recipe, a half-pound of pasta is called for, but the amount of sauce is enough for up to a whole pound of pasta.

You can do some of the cooking activities simultaneously – boil the pasta while sauteing the mushrooms, or blending the cream while doing either of those. But be mindful of cooking times if you do. 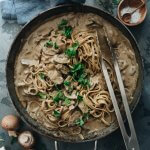 This recipe produces a generous amount of sauce for half a pound of pasta. You can use the same amount of sauce for a whole pound of pasta, though you’ll need to thin the sauce out a little bit and add extra salt, garlic, and vinegar to taste. The dried mushroom blend that I use contains oyster, portobello, black trumpet, and porcini mushrooms. You can use any one or combination of those. Dried white/button/champignon mushrooms works nicely, as well. I use dried mushrooms here because of their potent flavor. If you have a very high-speed blender (e.g. Vitamix) you can get by without soaking the cashews. Almond milk is my usual plant milk. For fresh mushrooms, I use brown/cremini. Portobello, white, porcini, oyster, and king oyster will work well here.