These Air Fryer Tomatoes are beautifully simple. The flavor is highly concentrated with notes of smokiness, yet the texture is tender and juicy. The tomatoes shine so much on their own that they hardly need any seasoning. They’re as versatile as raw tomatoes – put them in salads or sandwiches or on pizza or crostini. 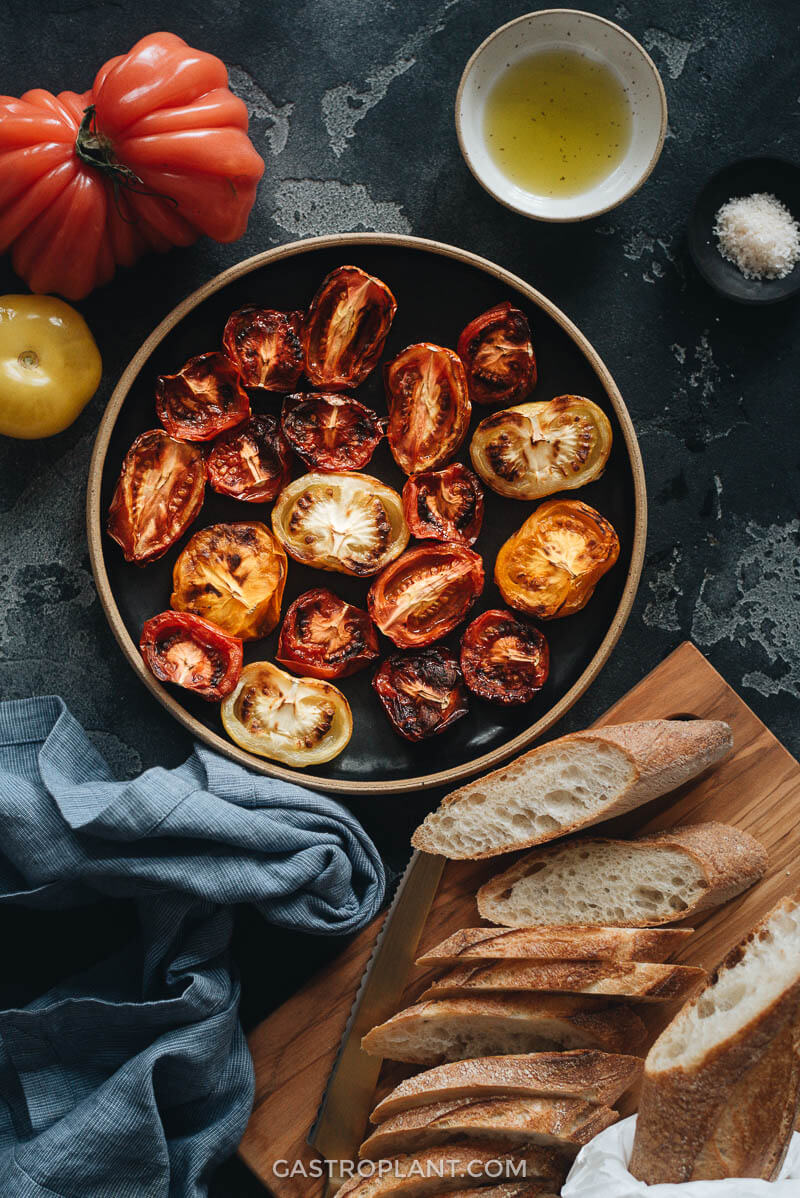 Simplicity as a goal

As a recipe developer, it’s easy for me to get caught up in complicated cooking methods that use a couple dozen ingredients. I’m trying to avoid that tendency and stay away from needless complication. Often a single high-quality ingredient, cooked properly, creates a superior experience. 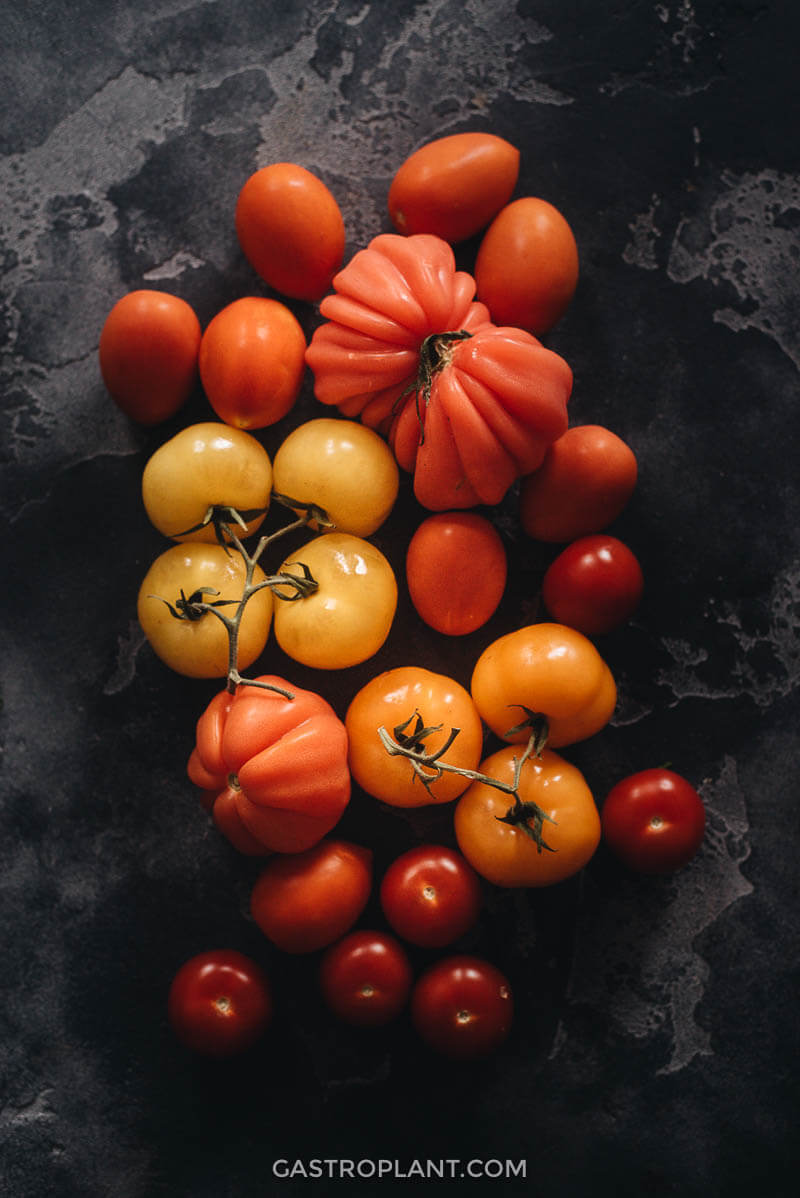 Starting from the premise that concentrated tomato flavor is quite nice on its own (observing this from sundried tomatoes and tomato paste) I wanted to see how much I could develop their flavor using the air fryer. Some recipes go for complete dehydration, which can take a few hours. I was aiming to get similar flavor concentration to dehydrated tomatoes, but keep the tomatoes tender. I also wanted to experiment with putting a char on the tomatoes. I have grilled tomatoes in the past and the smokiness adds another nice dimension. 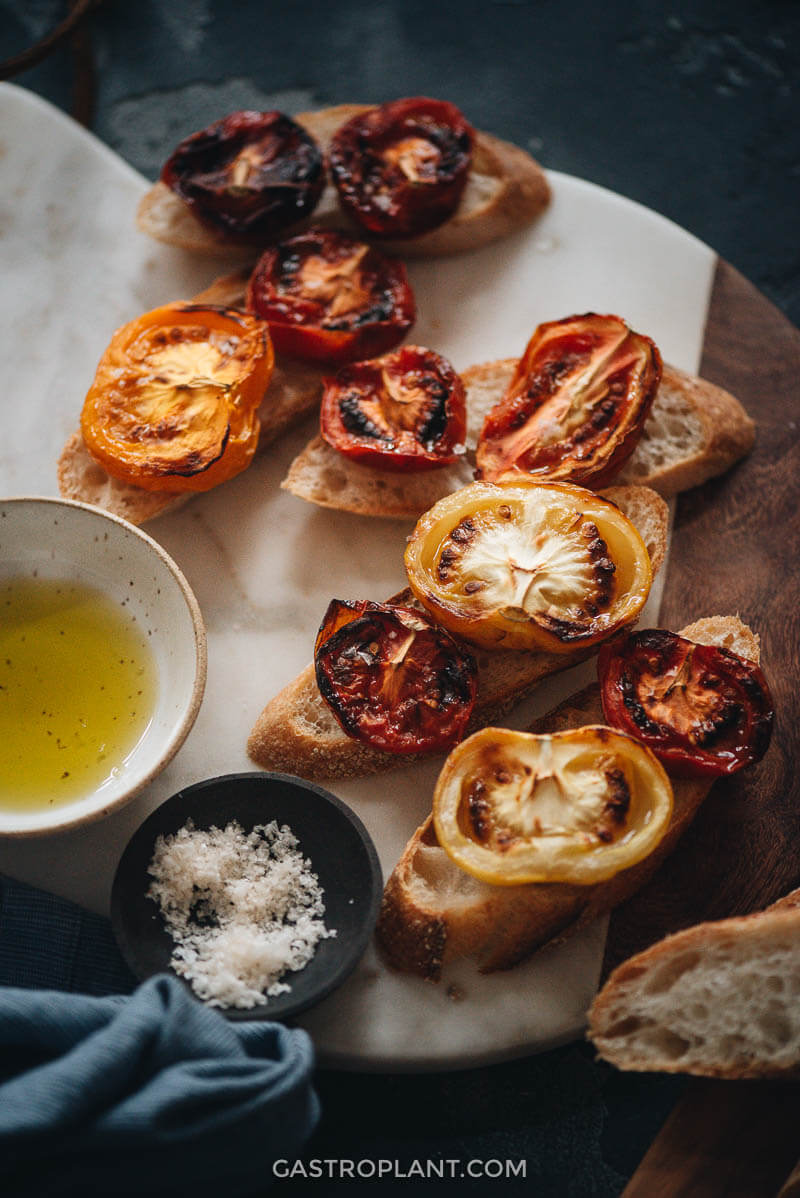 I tried a few different kinds of tomatoes, as shown in the photos here. They included Roma (aka plum), Campari (the smallish round ones), on-the-vine (both yellow and orange), and heirloom (the big irregularly shaped ones). My cooking method went as follows: air fry at medium-low temperature until sufficiently dehydrated then air fry at the highest temperature briefly to get a smoky char on the outside. The method was the same for all the varieties, though the low-temperature roasting time varied a lot depending on the size and type of tomato. Obviously, larger tomatoes and those with higher liquid content will take longer to dehydrate. You can see from the photo (particularly the fourth stage) what I mean by “sufficiently dehydrated”.

I cut each tomato in half, heightwise and placed each piece as if it were a bowl, to minimize the leaking of the juice. It’s important that the juice stays in the fruit so the water can evaporate and the flavor can concentrate.

As a sanity check, and to make sure I didn’t destroy the tomatoes, I started from the “Air Fryer Dried Tomatoes” recipe in Kathy Hester‘s book Vegan Cooking in Your Air Fryer. I recommend that book if you’re interested in a thorough and diverse collection of vegan air fryer recipes. 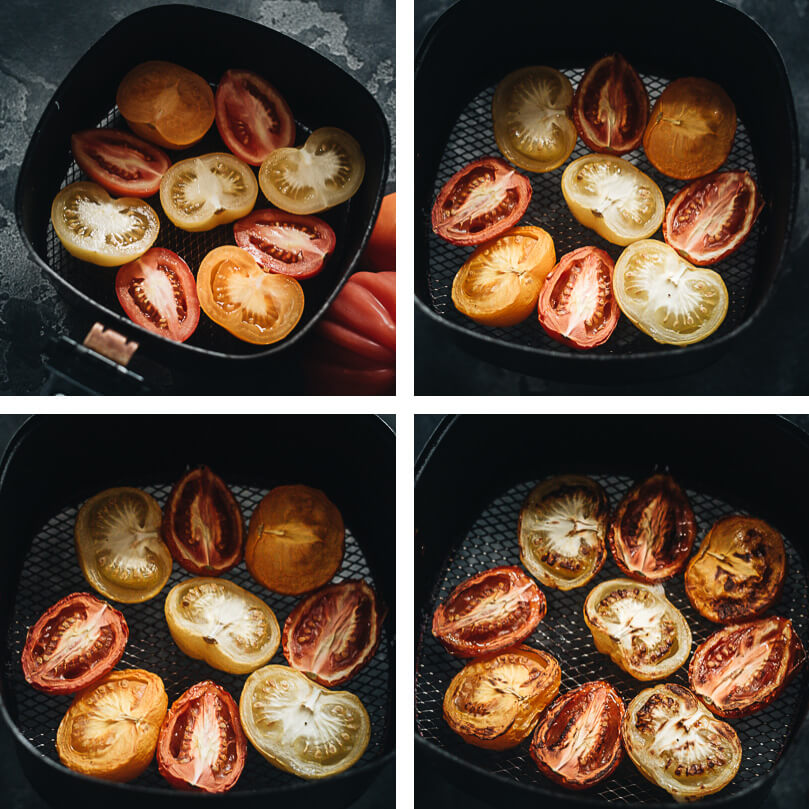 These tomatoes have the lowest water content and are relatively small. They dehydrate quickly and hold their shape well. The flavor isn’t as concentrated as the others but they’re still tasty.

They are juicier than the Roma tomatoes but still quite small, so they cook quickly and have great flavor. Because of the higher liquid content, they do become slightly fragile after roasting and should be handled carefully.

These are less juicy than the Roma, but not as dry as the Campari. They’re larger than either of the previous two, so they take more time to cook. Overall, I don’t think they were as flavorful in this application, so I don’t recommend them unless they’re the ripest ones available to you.

I almost felt bad experimenting with heirloom tomatoes because they are so glorious when eaten raw. And these tomatoes are larger than the others, so they take longer to cook. But I didn’t regret it once I tasted the final product. They have a ton of flavor and hold their shape quite well. If you do go for heirloom tomatoes, be sure to choose the smallest ripe ones.

These tomatoes are smaller than those I tested, so they should cook quite quickly. If you can get your hands on some ripe ones and want to cook them quickly, I’d recommend trying these, using the guidelines given in the recipe. Just be careful not to overcook them – the margin of error will be smaller. 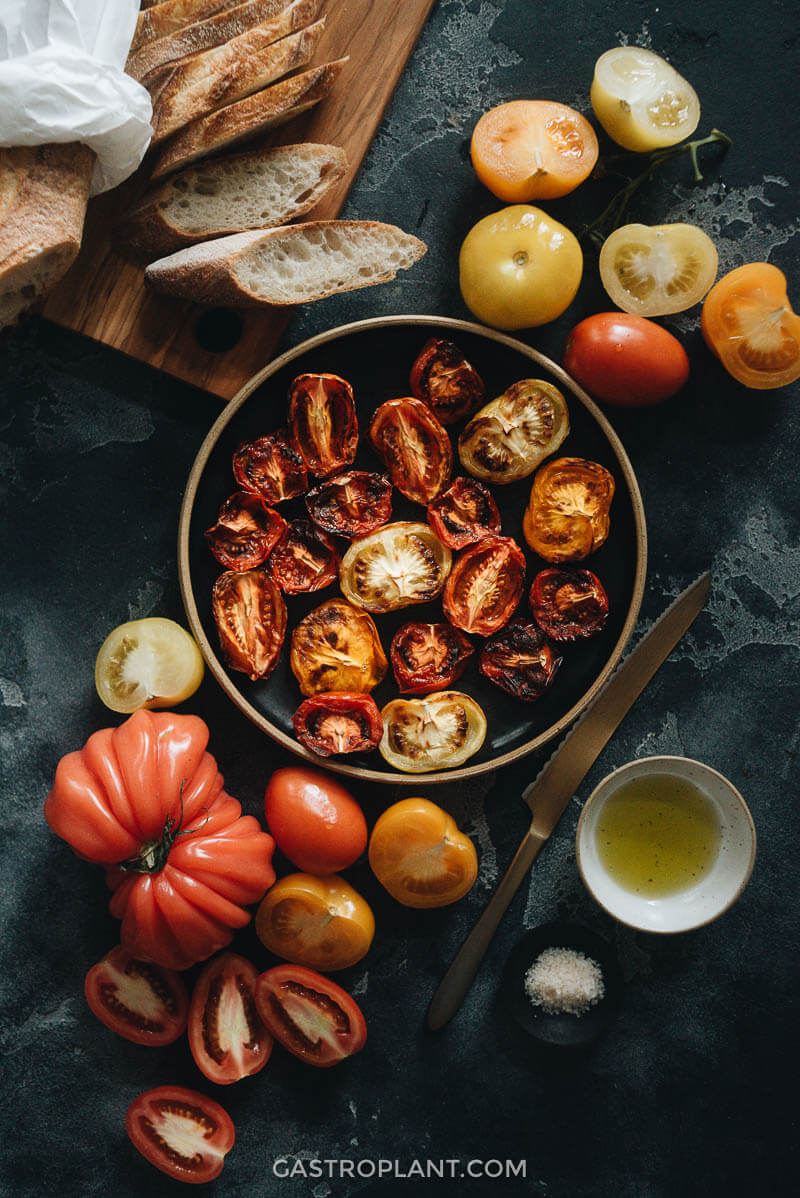 I ate the tomatoes I roasted on slices of baguette (aka crostini) and it was plenty flavorful. The tomatoes can benefit from a few grains of salt, but it’s a matter of personal preference.

It is not (yet) a thing to eat tomatoes with a full breakfast in the US, but I love copying the British custom and serving them alongside a Tofu Scramble or Cheese Grits.

They will otherwise be great in any application where you’d use raw tomatoes – think salads, sandwiches, tacos, and pizza. 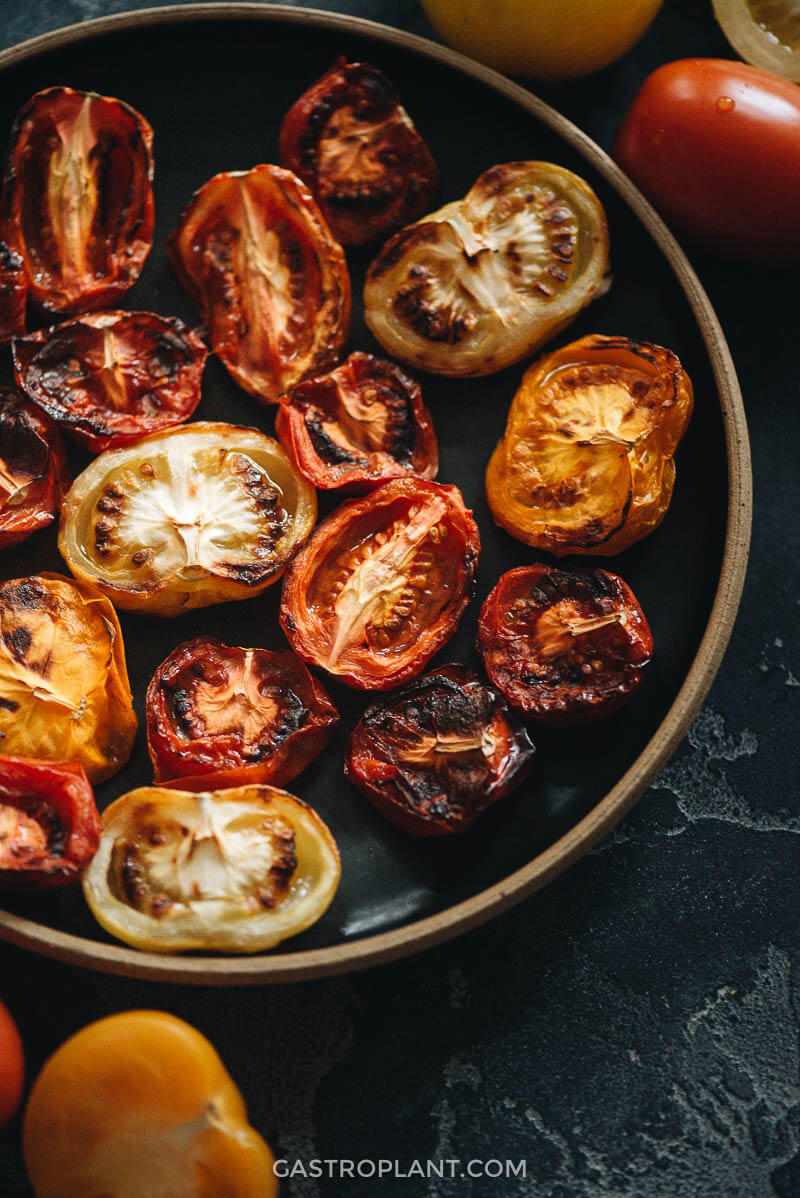 Check on your tomatoes frequently. You don’t want them to get too dried out or burned. The goal is to roast and concentrate the flavor, but not completely dehydrate them.

You can stack the tomatoes in the air fryer if you want to cook more of them at one time. They may become tricky to remove as they soften and melt into one another. They may not look as pretty at this point, but the flavor will still be there. 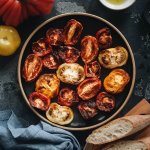 Their flavor is highly concentrated with notes of smokiness, yet the texture is tender and juicy. The tomatoes shine so much on their own that they hardly need any seasoning. They’re as versatile as raw tomatoes - put them in salads or sandwiches or on pizza or crostini.
Cook Time1 hr
Course: Appetizer, Dinner, Side Dish
Cuisine: American, Italian
Author: Thomas

Smaller tomatoes are recommended for shorter cooking times. Though large heirloom tomatoes do offer very rich flavor. Choose tomatoes on the riper end of the spectrum. You can store roasted tomatoes in an airtight container in the fridge for up to 5 days.