This vegan yaki udon is made with thick, tender noodles, assorted veggies, and shiitake mushrooms, all in a sauce that is light but deeply umami. I guarantee it’s better than the one from your local takeout spot. 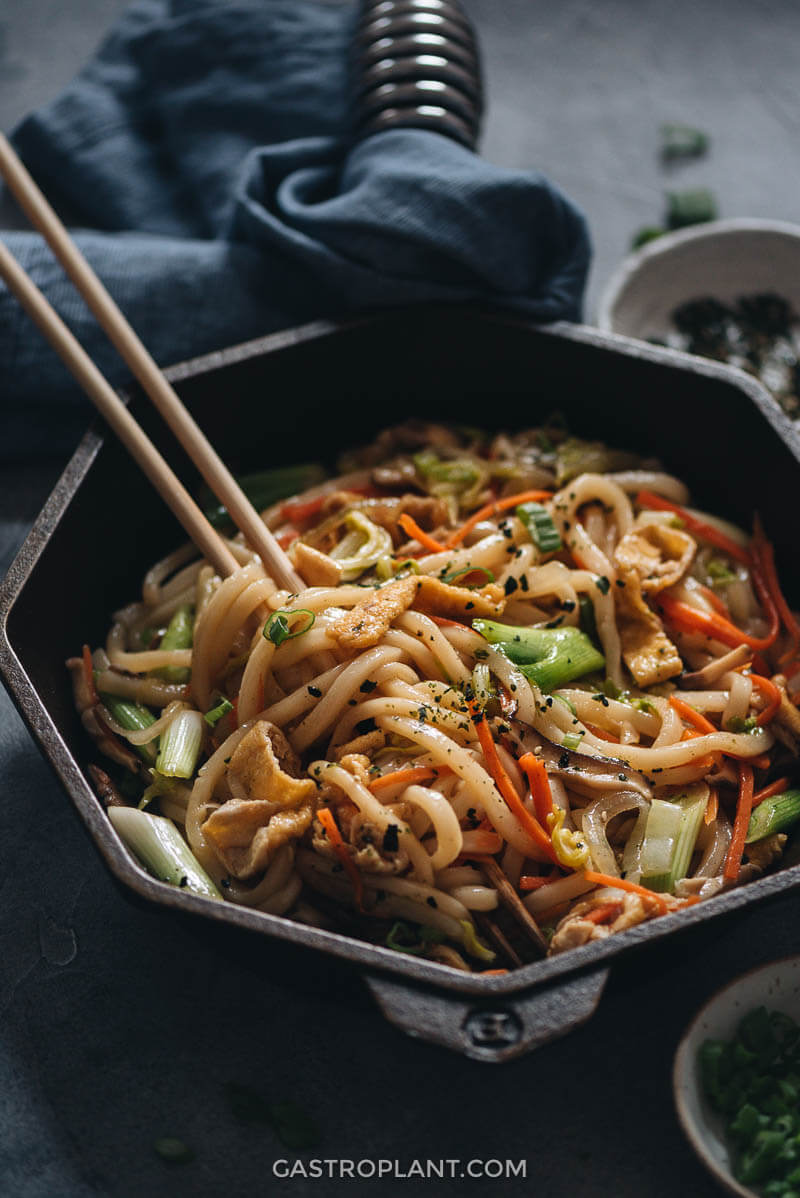 I was trying to come up with the reason that stir-fried noodles are so satisfying, and I think that it comes down to mouthfeel. Something about hot oil-coated chewy-yet-tender noodles in a salty, sometimes spicy, sour, or sweet sauce is really enjoyable to eat. There are other additions – meat, vegetables, mushrooms, tofu – that add some character, but they are really just supporting cast. Whether we’re talking about lo mein, pad thai, char kway teow, japchae, or mee goreng, it’s the noodles that are the star of the dish. 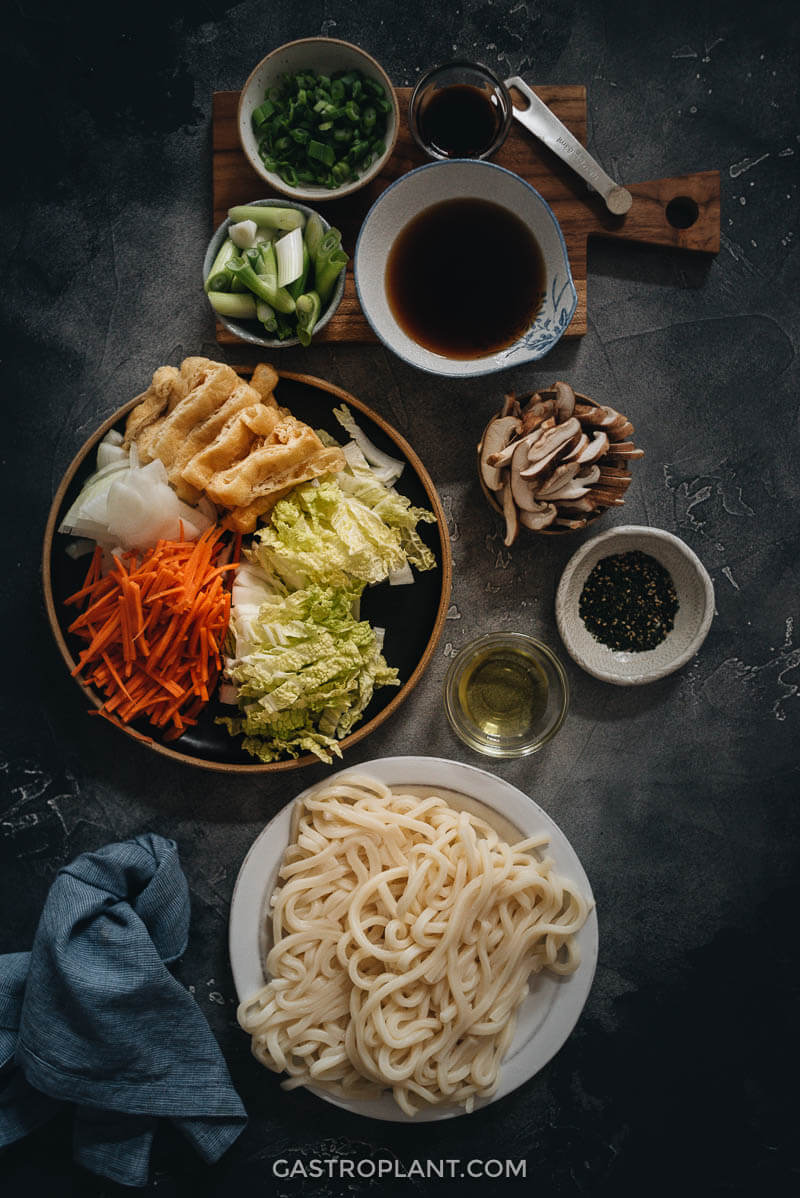 Udon is a special kind of noodle

Of the different shapes and sizes that noodles come in, few come close to udon in thickness. They are thicker than any solid Italian pasta. A few types of handmade Chinese noodles approach udon thickness, but they are flat, while udon is round.

Because of the thickness, udon has a unique “toothfeel”. It’s both soft and chewy. The noodles are so substantial that a meal might consist of just 10 or 15 strands. They absorb flavor really well and can stand up to a lot of heat without getting soggy or falling apart. Udon can be used in soup, stir-fried, or even served cold. 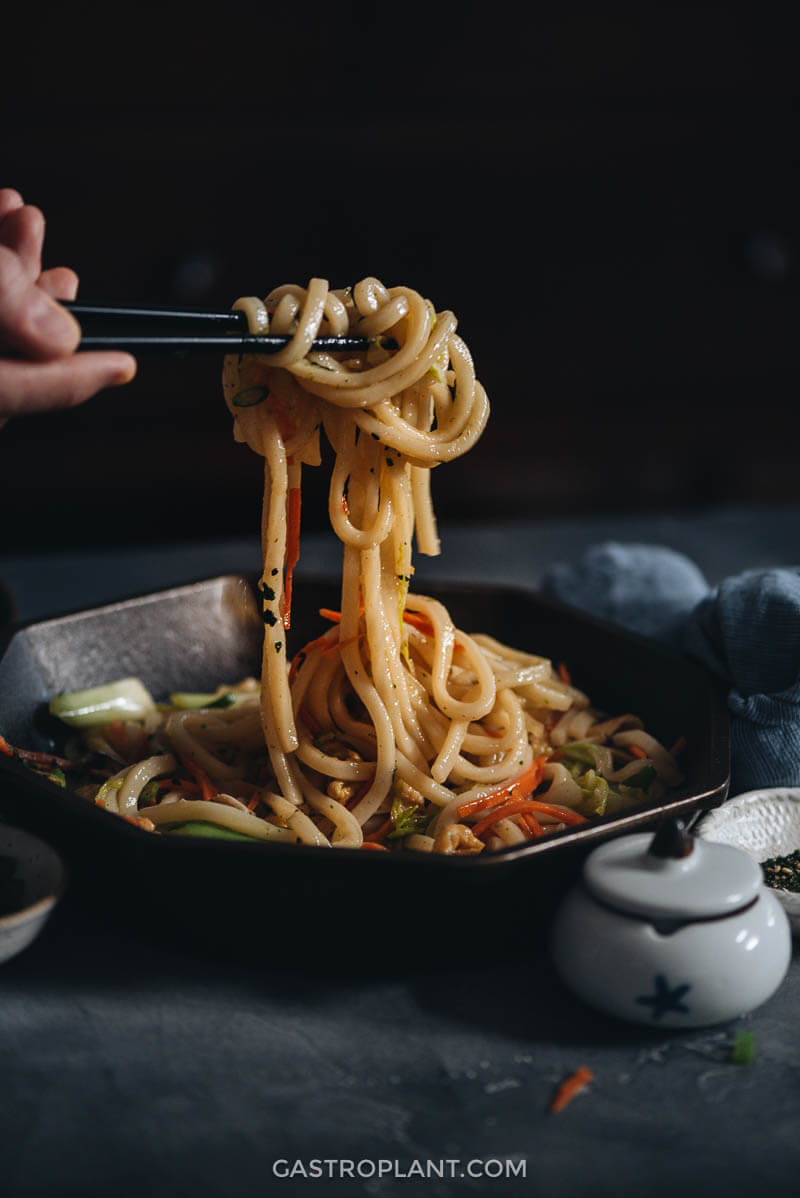 I wanted to develop a fairly easy yaki (stir-fried) udon recipe that includes some variety of plant-based foods to make a complete meal. I went with napa cabbage because of its versatility, shiitake mushrooms for their intense flavor, carrots for their crunchy texture, and fried tofu puffs (aburaage) for their special texture.

The cooking process is straightforward. Either thaw or boil the frozen udon noodles. Mix the stir-fry sauce (or make your own – see below). Then begin stir-frying the vegetables. There are onions, mushrooms, carrots, cabbage, and green onions. Once those are mostly cooked, you add the noodles, the sauce, and some seasoning, and stir everything together. The whole cooking process takes just over 10 minutes. 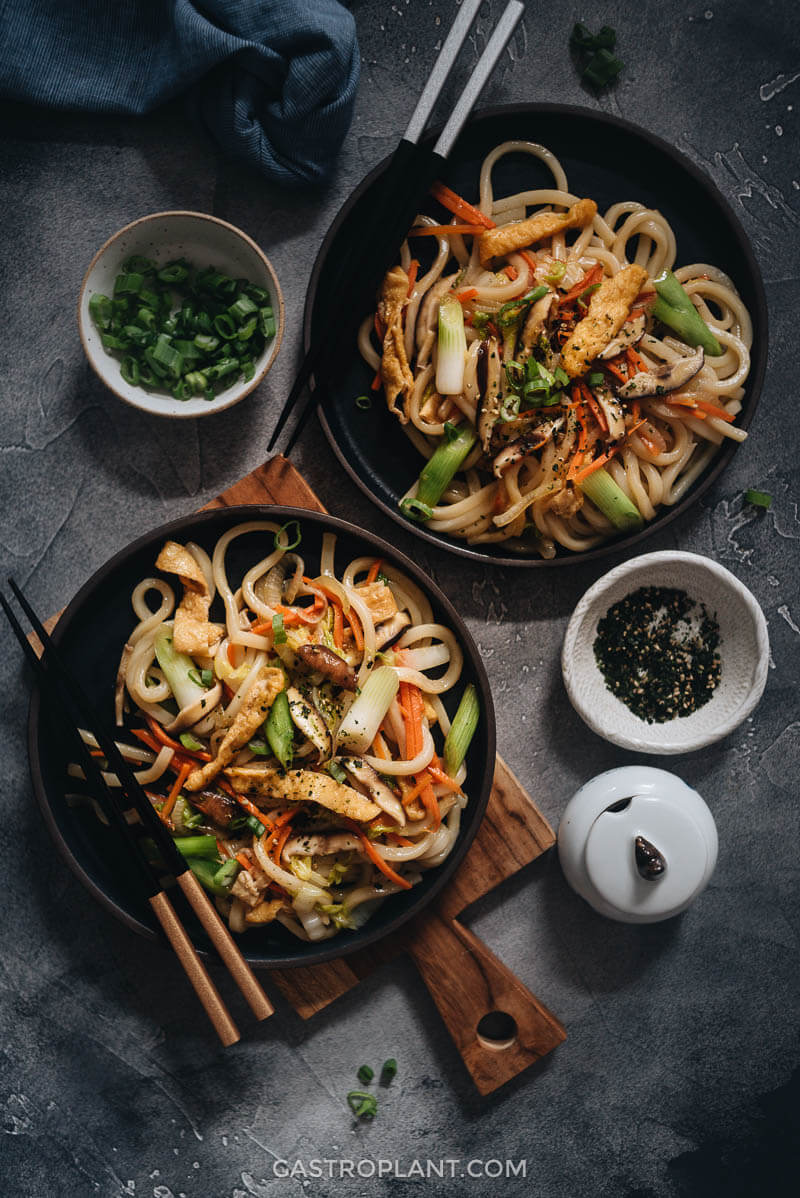 I needed to develop a sauce for this recipe since the traditional version actually uses a soup base known as “mentsuyu”, which is not plant-based. The flavor of mentsuyu is quite nuanced with many layers of umami. It has soy sauce, kombu (kelp), and bonito flakes. Plus the boozy sweetness of sake and mirin. My goal was to replicate, as best I could, the fishy, smoky, umami of the bonito flakes. I did this two ways.

First, I tested the recipe using a homemade kombu dashi-based mentsuyu, which took some time to make but really captured the essence of the sea. I used kombu, nori, dried shiitake mushroom, and liquid smoke, in addition to the soy sauce, sake, mirin, and maple syrup. That mentsuyu was richly flavored and worked wonderfully in the yaki udon, but it is another recipe in itself. I’ll share it in the coming days. 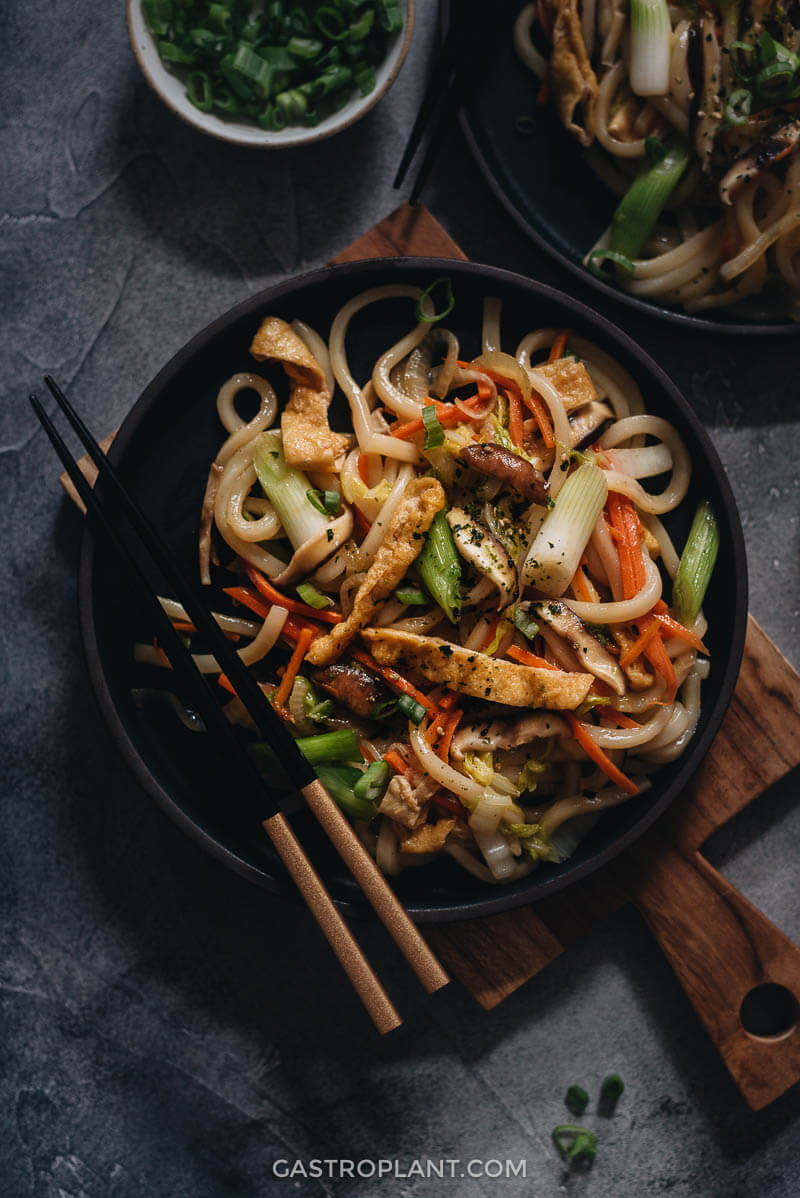 How to shop for the vegan yaki udon

If you have an Asian market nearby, I highly recommend paying it a visit. There you should be able to get the ingredients for this dish, including: 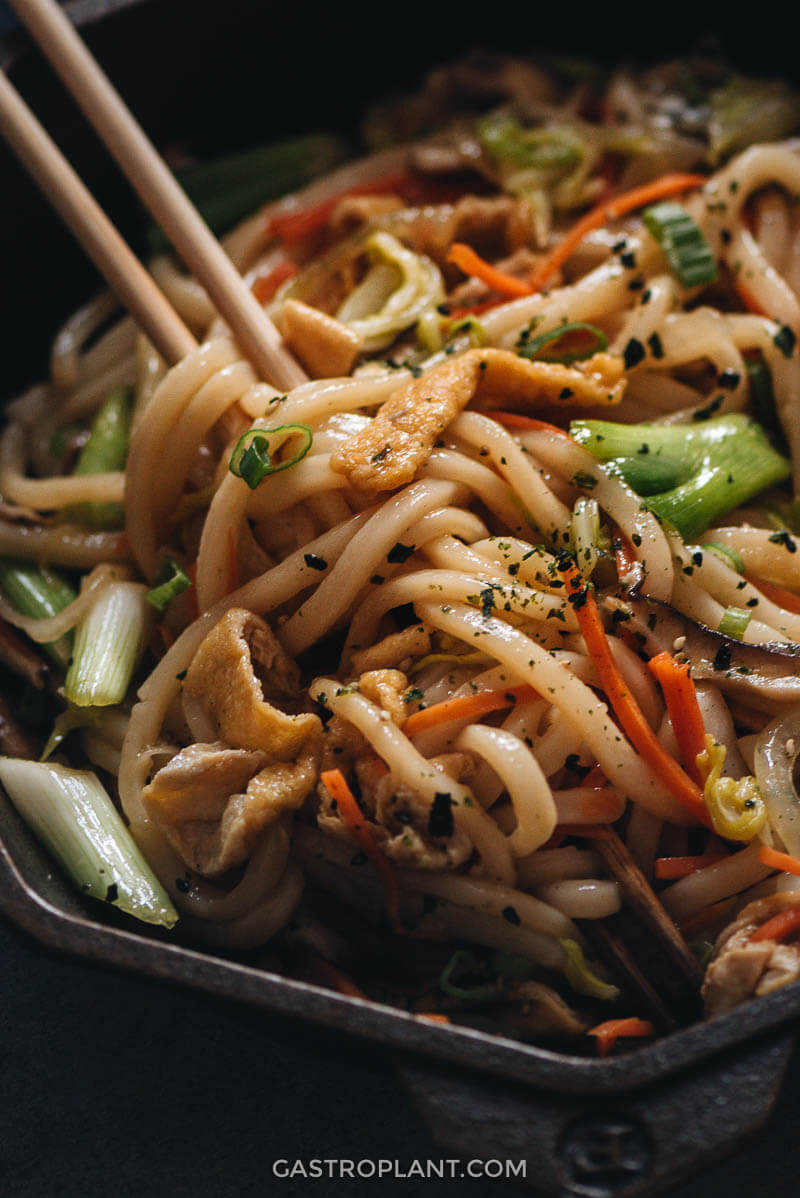 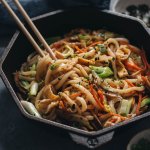 Dried udon will work in this recipe, but the result will be quite different. You will want to slightly undercook the dried noodles when boiling them because they will absorb the sauce and cook a bit more. Use frozen udon noodles if you have the option. As an alternative to the sauce, you can use homemade vegan dashi-based mentsuyu (recipe coming soon). Do take note that the recipe uses soy sauce in the sauce and in the stir fry (two times) to accommodate the possibility of using prepared mentsuyu. You can substitute other types of sweetener for the maple syrup, which I used for convenience. Traditional Japanese recipes use sugar. A liquid will be easier to dissolve.