This Spicy Cucumber Salad uses a smoky and nutty chili oil with vinegar and a touch of sweetness to make a very flavorful and refreshing appetizer. 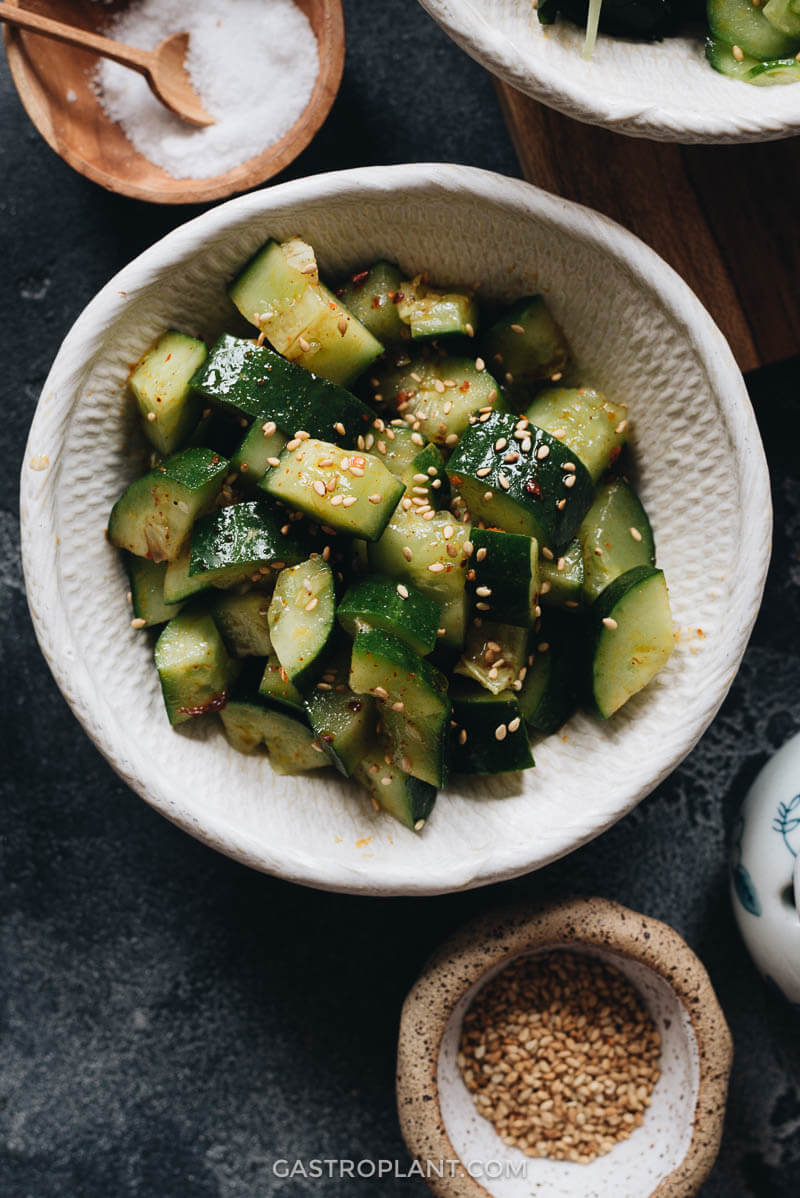 What is this Spicy Cucumber Salad?

I came across a dish quite similar to this one at a restaurant in the past few months. It was a play on the traditional Sunomono, a Japanese salad of cucumbers, seaweed, and other items in a sweet-sour vinegar marinade with sesame seeds and radish sprouts on top. This one, in particular, had a remarkable smoky chili oil – not a standard touch but very welcome.

I wanted to recreate that dish, so I developed a chili oil using chili flakes and chipotle powder to make it happen. The chili oil ended up having some Chinese touches as well – five-spice powder and Sichuan peppercorn gave it a nice complexity.

Because of the hybrid Japanese-Chinese nature of the chili oil that I put together for this dish, I went ahead and did two versions of the salad, one Japanese and one Chinese.

Both versions include the sweet-sour vinegar mixture and nutty sesame seed topping. The cucumbers are cut differently, but both ways allow it to absorb lots of sauce. The main difference is in mouthfeel. 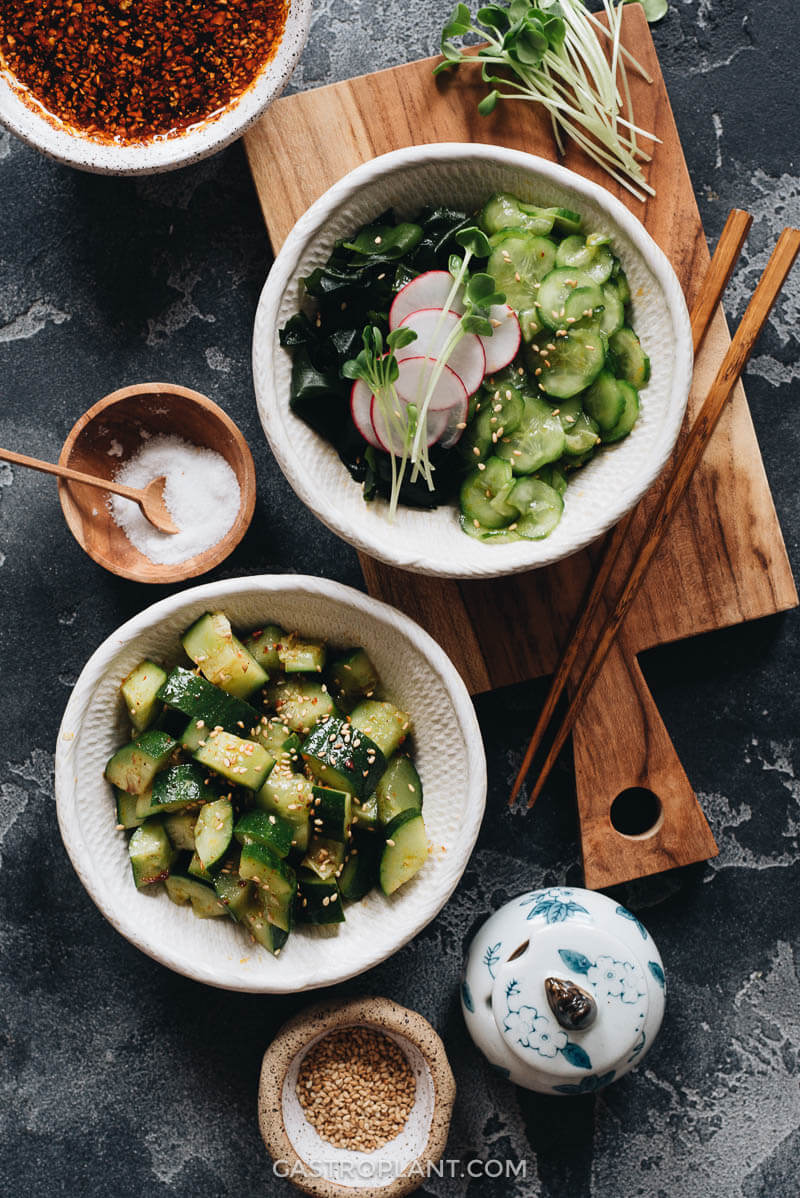 The bowl on top contains the Japanese style salad (sunomono) while the one on the bottom has the Chinese style (liangban huanggua).

A Note About the Chili Oil

This recipe requires homemade chili oil made per my recipe (or any recipe you prefer, for that matter). You can also use store-bought chili oil if you like. But my recipe is really quick to make and extremely versatile. If you’ve got the extra 10 minutes, I highly recommend making some.

A Note About Cucumbers

If you can, use Persian, Japanese, or English cucumbers for this dish. They have thinner skin than the thick standard American variety and their seeds are less watery. 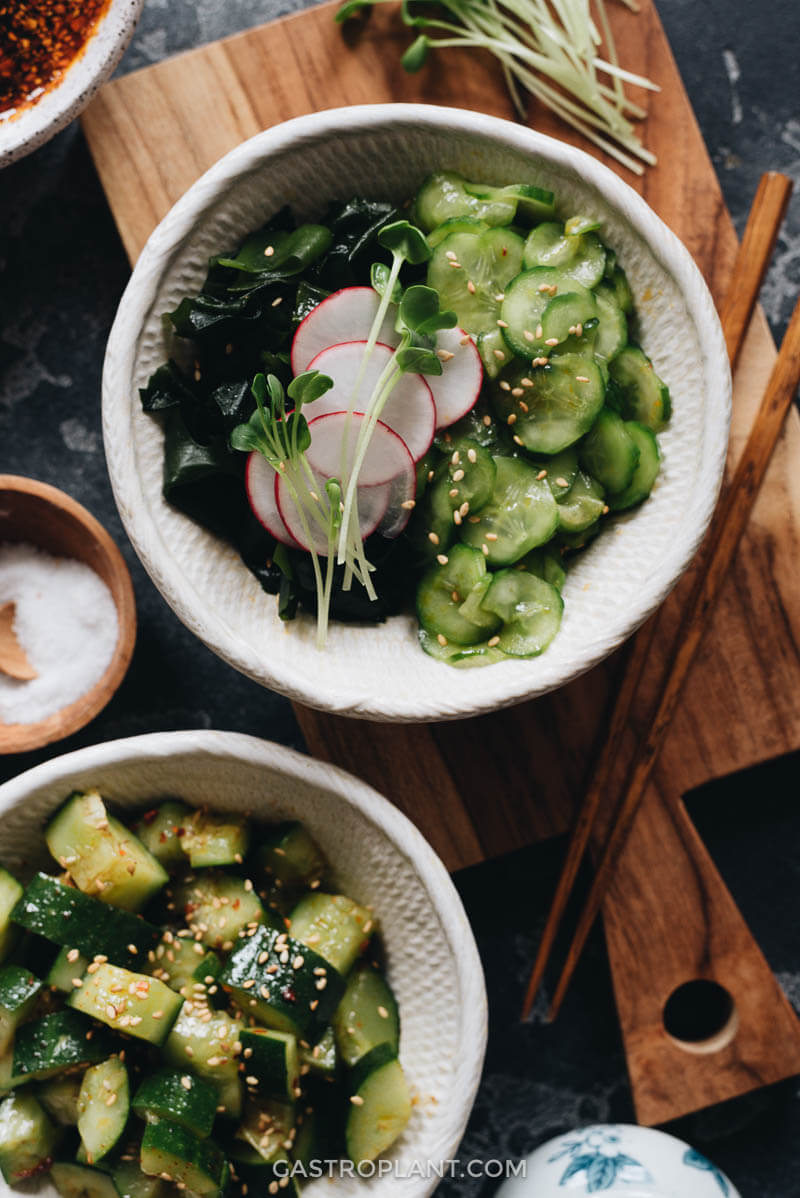 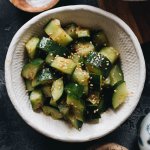 For Japanese Version Only