This Vegan Cream of Mushroom Soup is just like it sounds – rich, silky, and creamy with an intensely mushroomy flavor. The recipe uses a couple of vegan food hacks to take it to the next level. 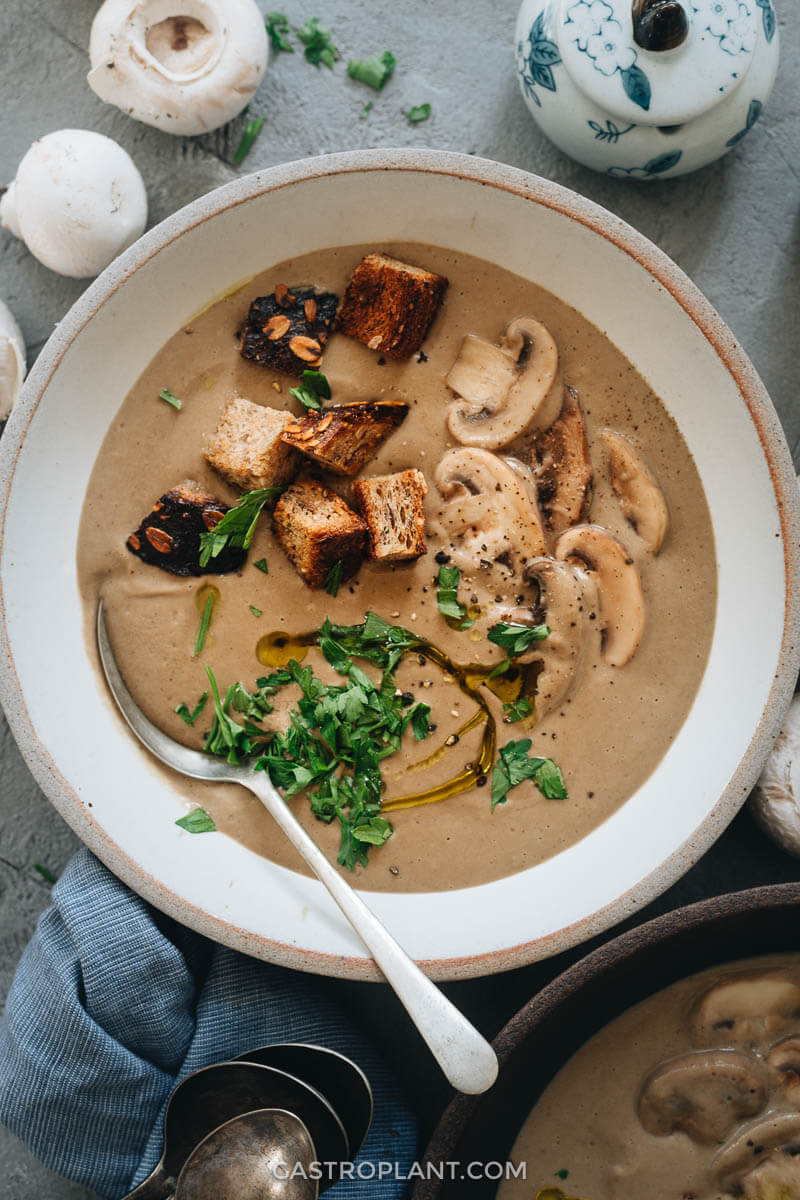 Intro to the Vegan Cream of Mushroom Soup

I ate canned cream of mushroom soup all the time growing up and mushroom soup is very much a comfort food for me. I wanted to develop a plant-based version that uses everyday ingredients with no additives.

This soup uses lots of mushrooms – both fresh and dried – some garlic and onion, plant milk, and cashew butter to form a well-rounded base with huge mushroom flavor and a thick, velvety texture.

What Makes This Soup Great? 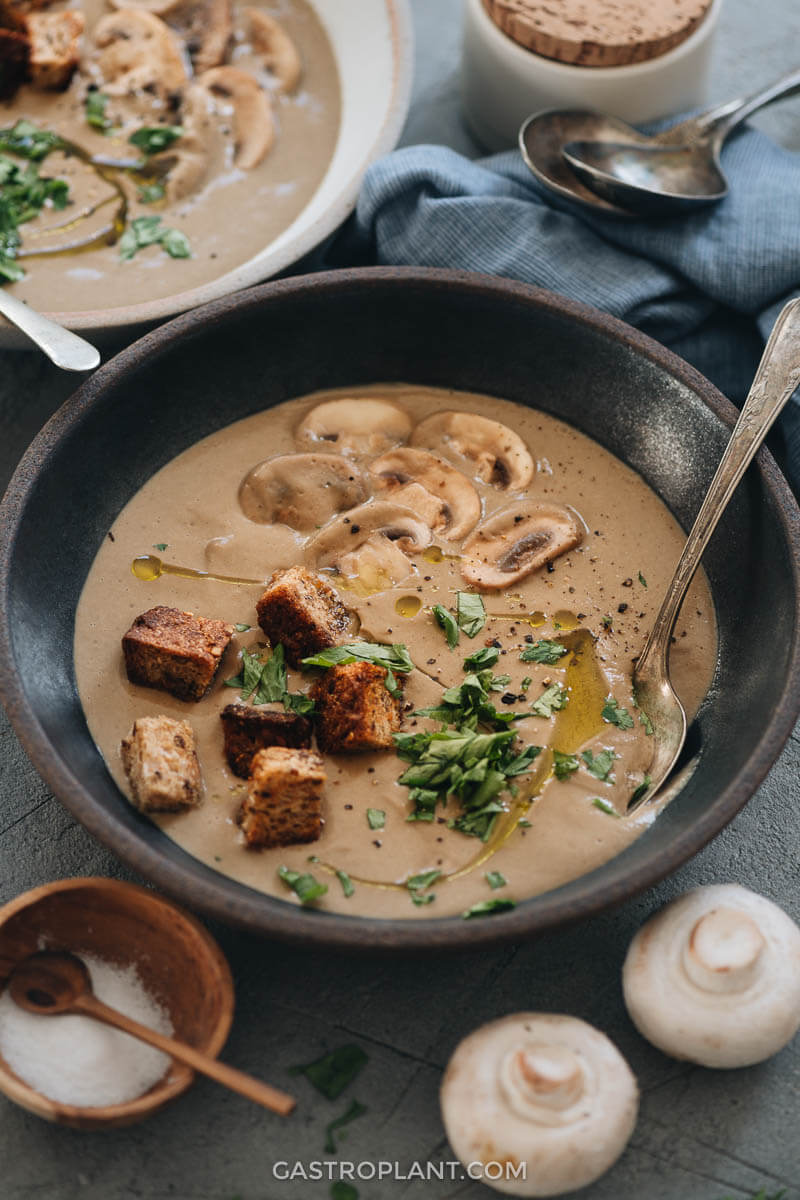 How to make Vegan Cream of Mushroom Soup

First, you rehydrate the dried mushrooms to make them easier to blend.

While the dried shrooms are rehydrating, you saute some fresh ones in vegan butter with garlic and onion. Stir in some flour and get it a little toasty and nutty, then stir in a bit of dry sherry (or veggie stock).

When the rehydrating is done, transfer your sauteed ingredients to the blender (you’re going to need a blender, by the way) and add the rehydrated mushrooms, along with some cashew butter, vegetable stock, and plant milk. Blend it up nice and smooth.

Now, it goes back into the pot to thicken a little and infuse with bay leaf, which adds a certain “brothiness” to it. A dash of soy sauce to further enhance the flavors. Add salt to taste. Use truffle salt if you have it (but don’t overdo it).

Garnish the soup if you want – I like to use parsley, homemade croutons, and a drizzle of olive oil – and it’s ready to serve!

Some Cooking Notes Before You Jump In

Mushroom pieces can add a nice bit of texture to the soup. If you want, set some of the sauteed mushrooms aside (don’t blend them) and then add them to simmer with the soup after you’ve transferred it to the pot.

Lumps. Some people like lumps in their cream of mushroom soup. Some people can’t stand lumpy soup. This soup can get slightly lumpy and if you don’t like that, keep a whisk or fork handy to whip the lumps into submission. 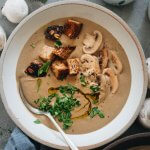 This Vegan Cream of Mushroom Soup is just like it sounds - rich, silky, and creamy with an intensely mushroomy flavor. The recipe uses a couple of vegan food hacks to take it to the next level.
Prep Time10 mins
Cook Time30 mins
Course: Appetizer, Dinner
Servings: 4

If you’d like the finished dish to have intact mushroom pieces in it, you can set them aside before blending everything together. You can simmer for longer than 10 minutes but don’t do more than 30. You may need to add a splash of vegetable stock or plant milk if the soup becomes too thick during simmering. If the soup gets lumpy, you may prefer to whisk the lumps out, or just enjoy the slightly different texture they provide. 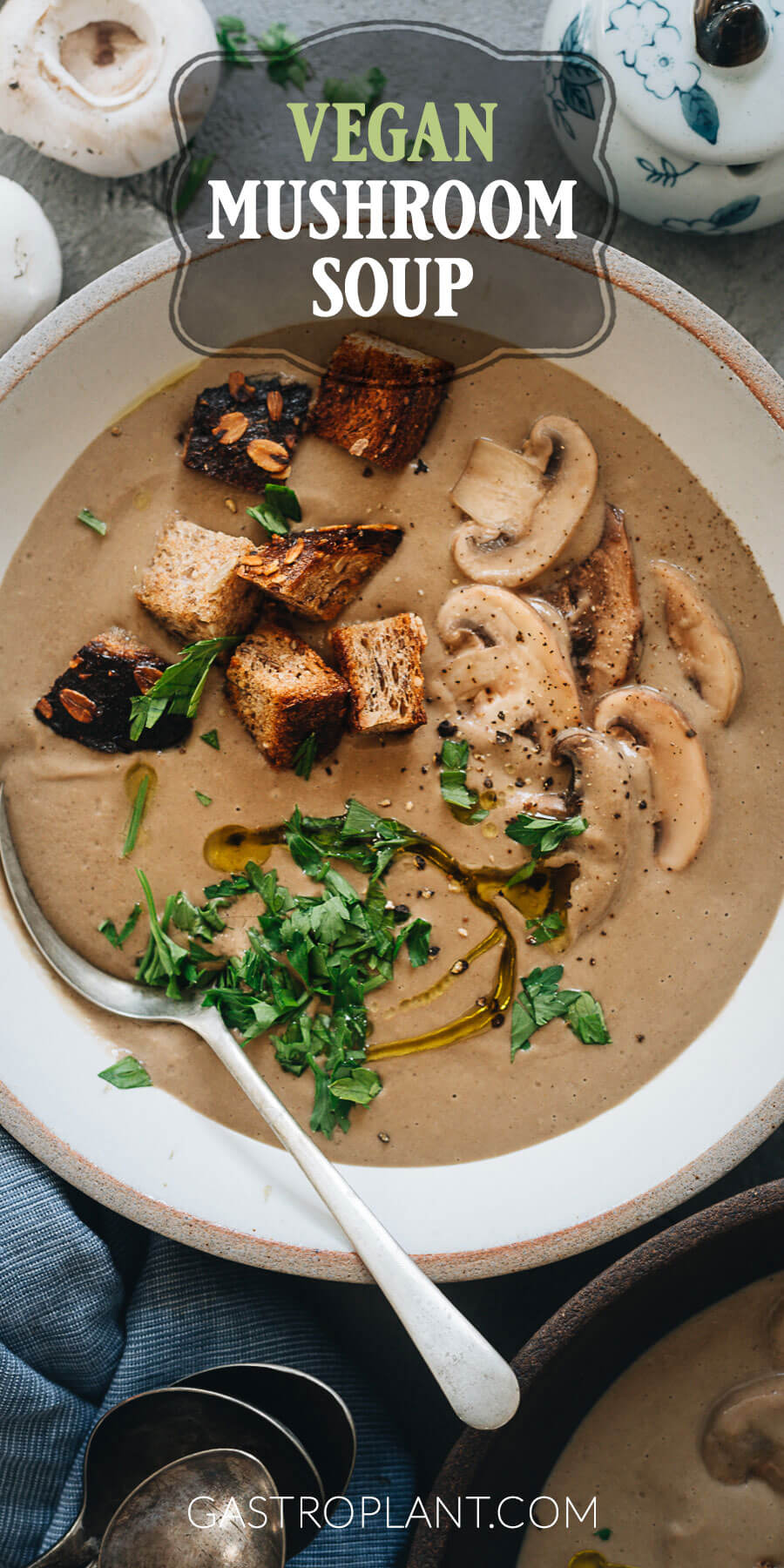