This vegan shepherd’s pie has a base of assorted veggies and mushrooms in gravy, a mid-layer of lentils and fresh herbs, and a canopy of creamy mashed potatoes. It’s 100% heartwarming nourishment, perfect for a family dinner or potluck in cooler weather. 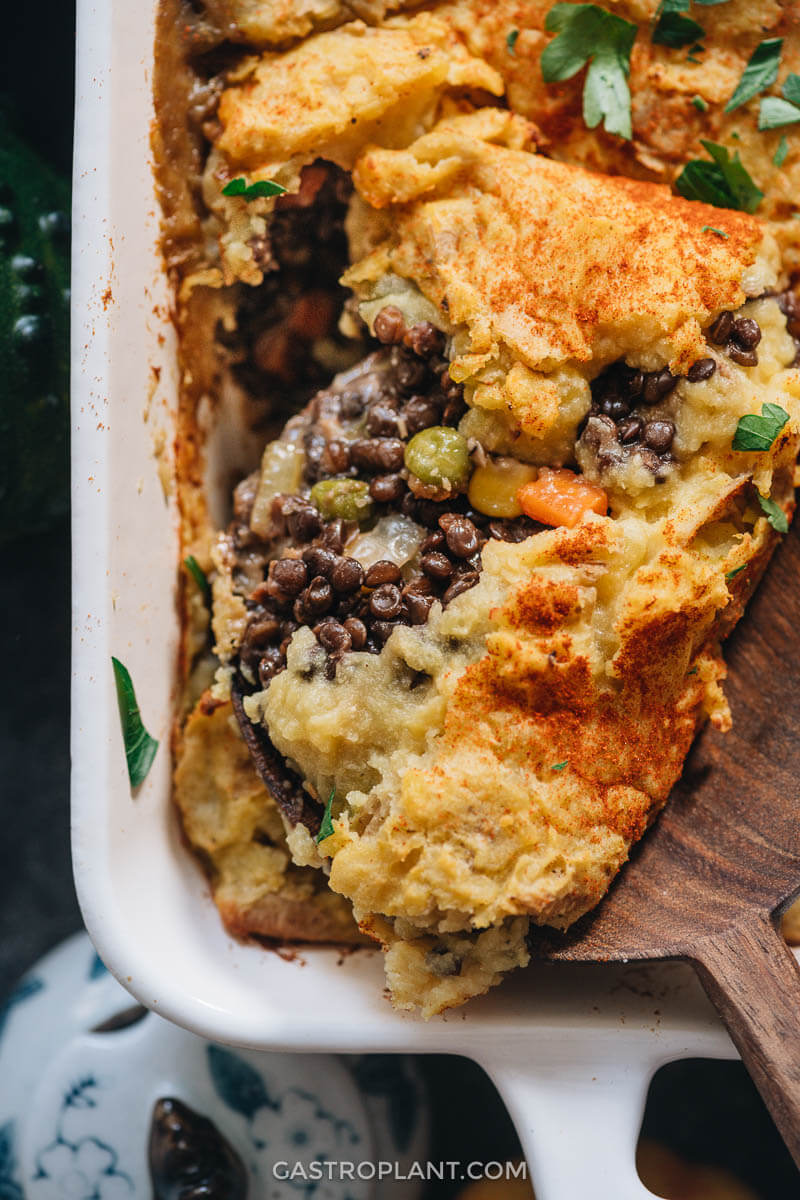 I took some time off from blogging lately and the seasons have completely changed. Gone are the hot, humid days that make me reluctant to go in the kitchen. Right now it’s mostly comfortable, but I can tell the cooler days are right around the corner. I’m starting to want heartier meals, and shepherd’s pie was one of my favorite hearty meals growing up.

This vegan shepherd’s pie replaces the meat (often lamb or beef) with a combination of different veggies, mushrooms, and lentils. Some simple mashed potatoes go on top. The potatoes taste like potatoes – they’re not overloaded with distractions – and have a nice smooth mouthfeel.

I used a great recipe from the latest issue of Forks Over Knives as a starting point, but I’ve added a number of additions to make this a more filling and flavorful meal. 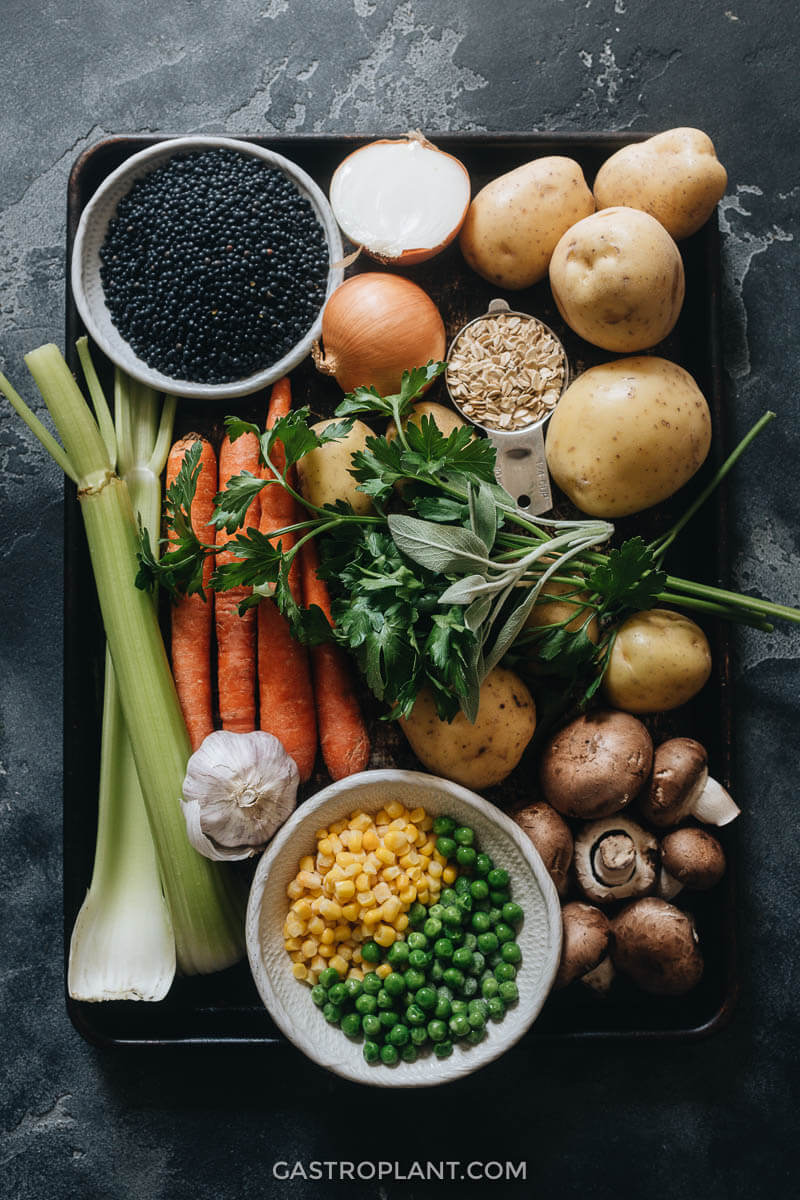 The short answer is comfort. You get a savory, filling, protein-rich meal and with this variety of veggies, there are some nice textures in there, too. It’s plenty of food and won’t leave you feeling hungry, but it also won’t weigh you down (I went for a run immediately after eating two servings of the test batch).

It takes some time to put everything together, about an hour and a half, so I recommend making this for a family dinner, meal prep, or potluck. 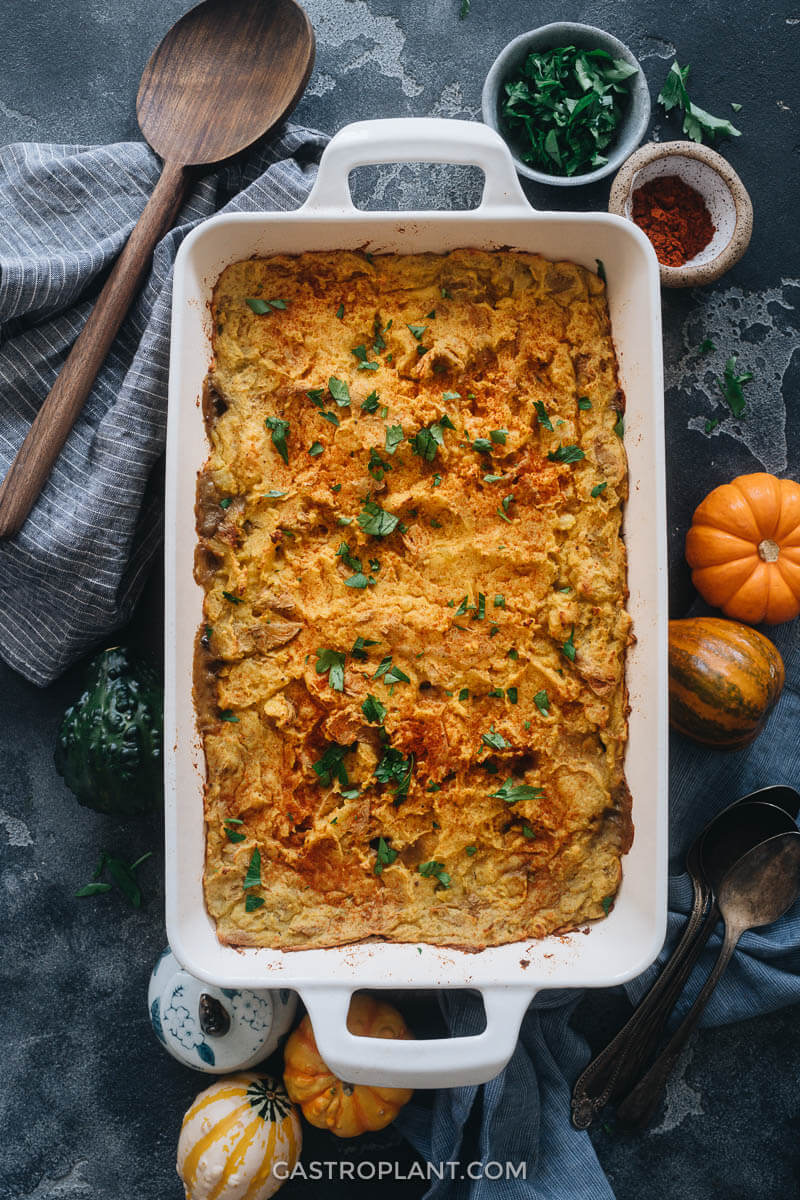 Cook the potatoes and lentils

There are a few ways to do this: 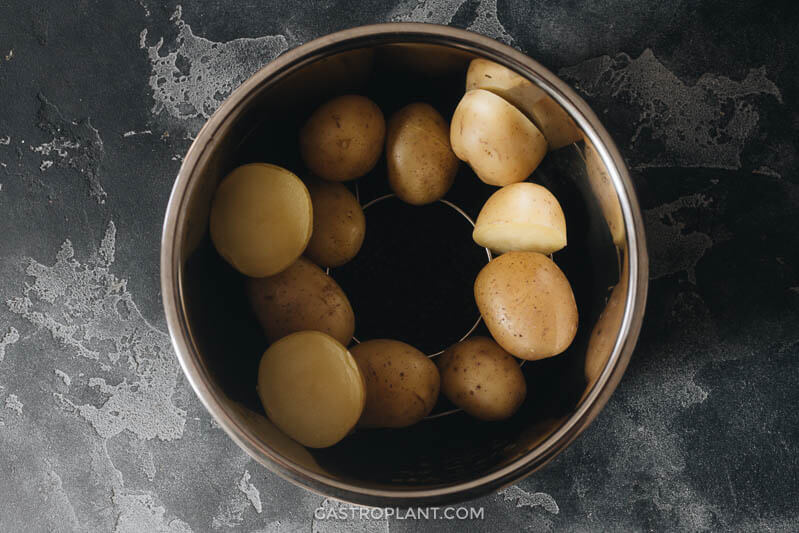 Inside the Instant Pot: lentils and water hide in the darkness below the steaming stand

Use your trusty masher or a fork to crush the taters to your preferred consistency. Add a small amount of plant-based butter, plant milk, and nutritional yeast, then season with salt and pepper.

You control the consistency by how thoroughly you mash and how much plant milk you add. I left the skin on the potatoes and mashed them coarsely, so they’ll have some variation in the texture. But if you like yours smooth, go for it! Mash them all the way and mix in plant milk until you’re happy with them.

Saute the veggies and mushrooms and make the gravy

While the potatoes and lentils cook, you can cut the onion, garlic, carrot, celery, and mushrooms. Saute them all together with dried Italian herbs, then add plant milk and ground oats to make a creamy gravy. You can add frozen veggies (corn, peas, etc.) here if you like.

It’s important to make sure the fresh veggies are cooked all the way through before moving on. Taste a piece of onion, carrot, and celery to make sure it’s not too crunchy. They won’t get cooked much more even though they’ll be baked in the pie. 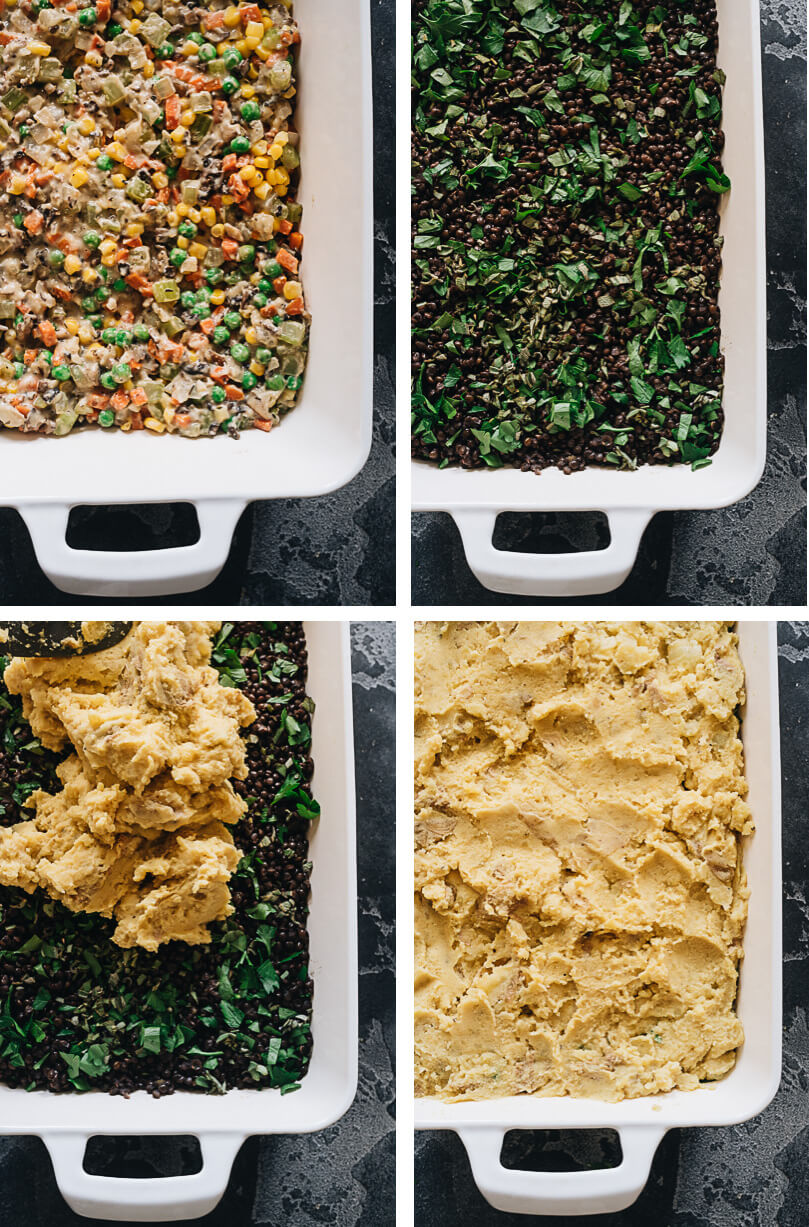 Spread an even layer of the veggie-mushroom on the bottom of a large baking dish (at least 3 quarts/liters). Spread a layer of lentils on top of that, sprinkling in some optional fresh parsley and sage. Top it off with mashed potatoes.

Bake it until it starts bubbling and the potatoes are slightly browned and it’s ready to serve! You can sprinkle some paprika on top before serving if you like. 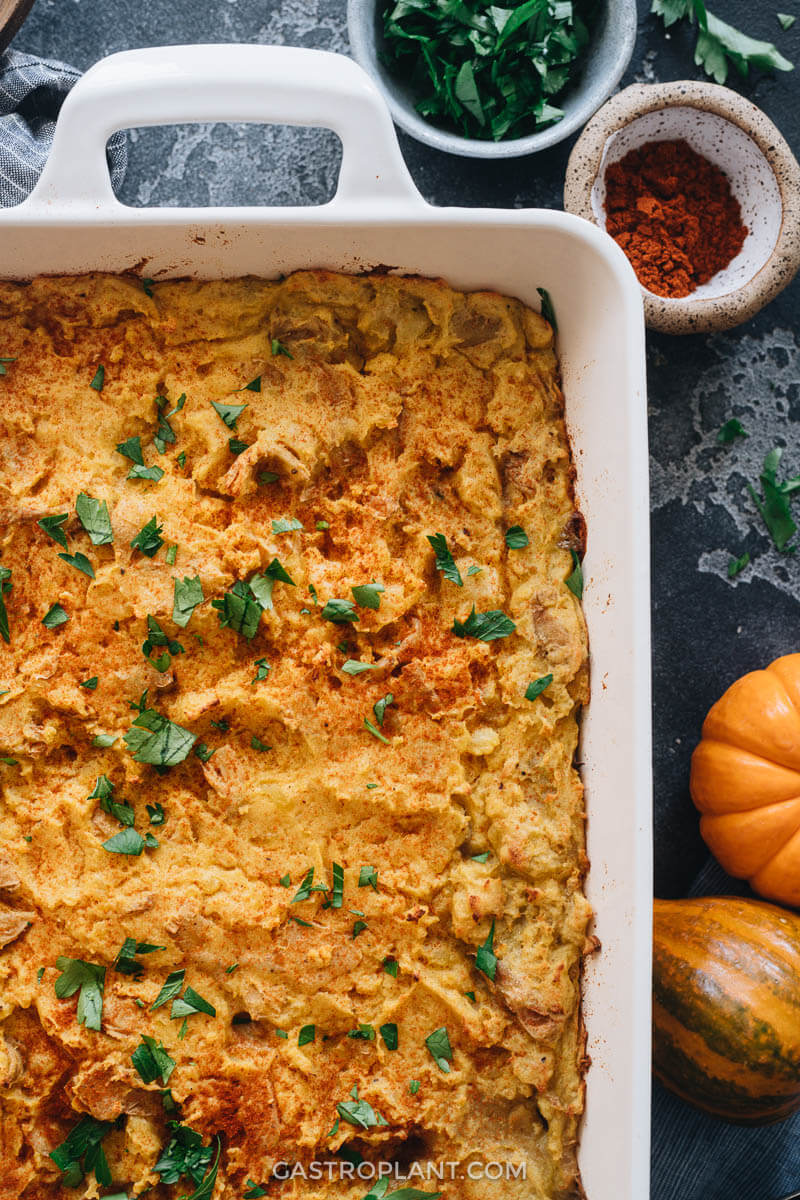 If you want to make this ahead of time, you can assemble the pie and save the final baking step for right before you serve. If the dish has been chilled, it might take a bit longer to heat through, up to 45 minutes.

Taste and season the components before you assemble the pie! You’ll want to make sure each part (sauteed veggies-mushrooms-gravy, lentils, and mashed potatoes) is seasoned with salt and pepper to your liking before putting them in the pan and baking them. This will make for a more flavorful finished dish. 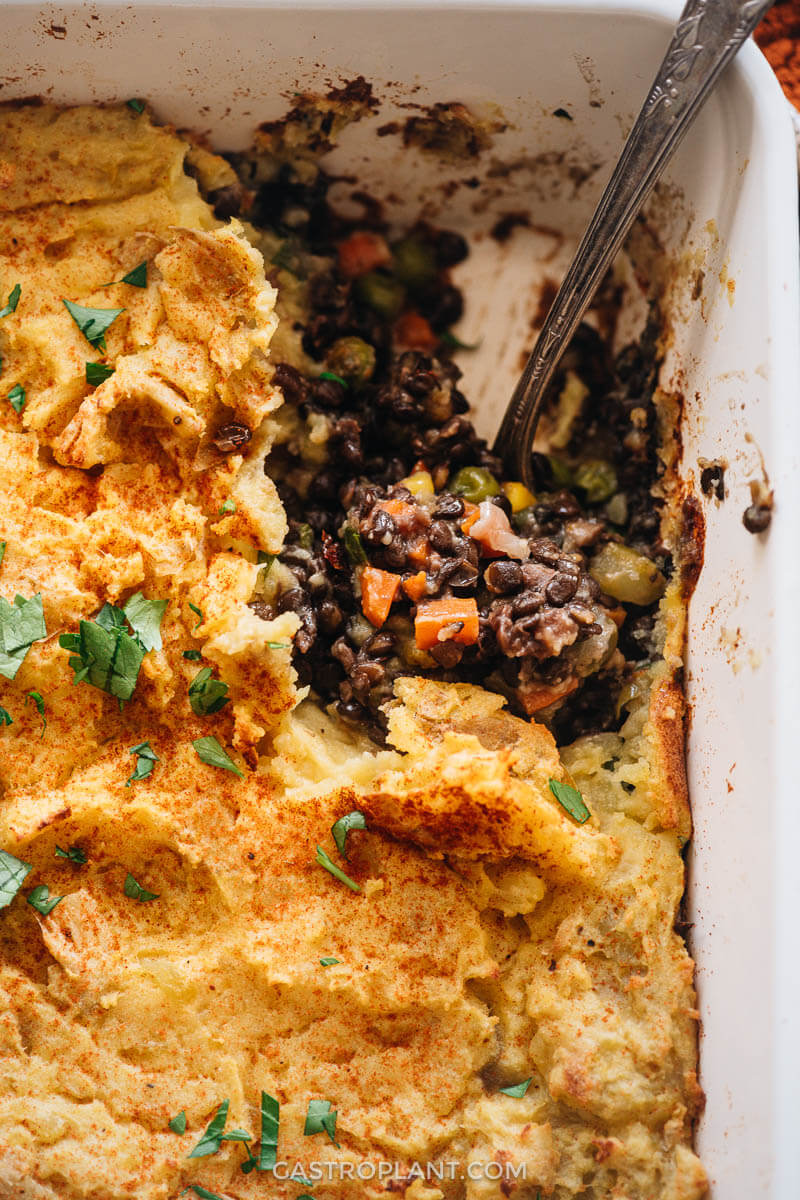 Quick Side Dishes to Pair with Vegan Shepherd’s Pie 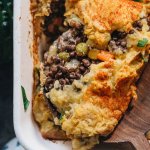 This vegan shepherd’s pie has a base of assorted veggies and mushrooms in gravy, a mid-layer of lentils and fresh herbs, and a canopy of creamy mashed potatoes. It’s 100% heartwarming nourishment, perfect for a family dinner or potluck in cooler weather.
Prep Time25 mins
Cook Time1 hr 5 mins
Course: Dinner
Cuisine: British
Servings: 4
Author: Thomas

Cook the potatoes and lentils

If using an Instant Pot and Steaming Stand

If not using an Instant Pot

Cook the vegetables and gravy

Assemble and bake the pie

There are 2 cups of plant milk needed, one for the potatoes and one for the gravy.
You can peel the potatoes after steaming if you like, but it’s not required.
You can use canned lentils instead of dried. One 15-ounce (425-gram) can contains slightly less than this recipe produces (it makes about 20 ounces / 565 grams) but the amount in the can should still be enough to create the lentil layer.
Any kind of lentils will work, though some varieties will become softer than others, given a single cook time.
If you’d like to prepare this ahead of time and serve it later, you can assemble the pie but not bake it. Cover it and keep it in the fridge in the meantime. Bake it at 425 F (220 C) for 30-40 minutes, until heated through, right before serving. 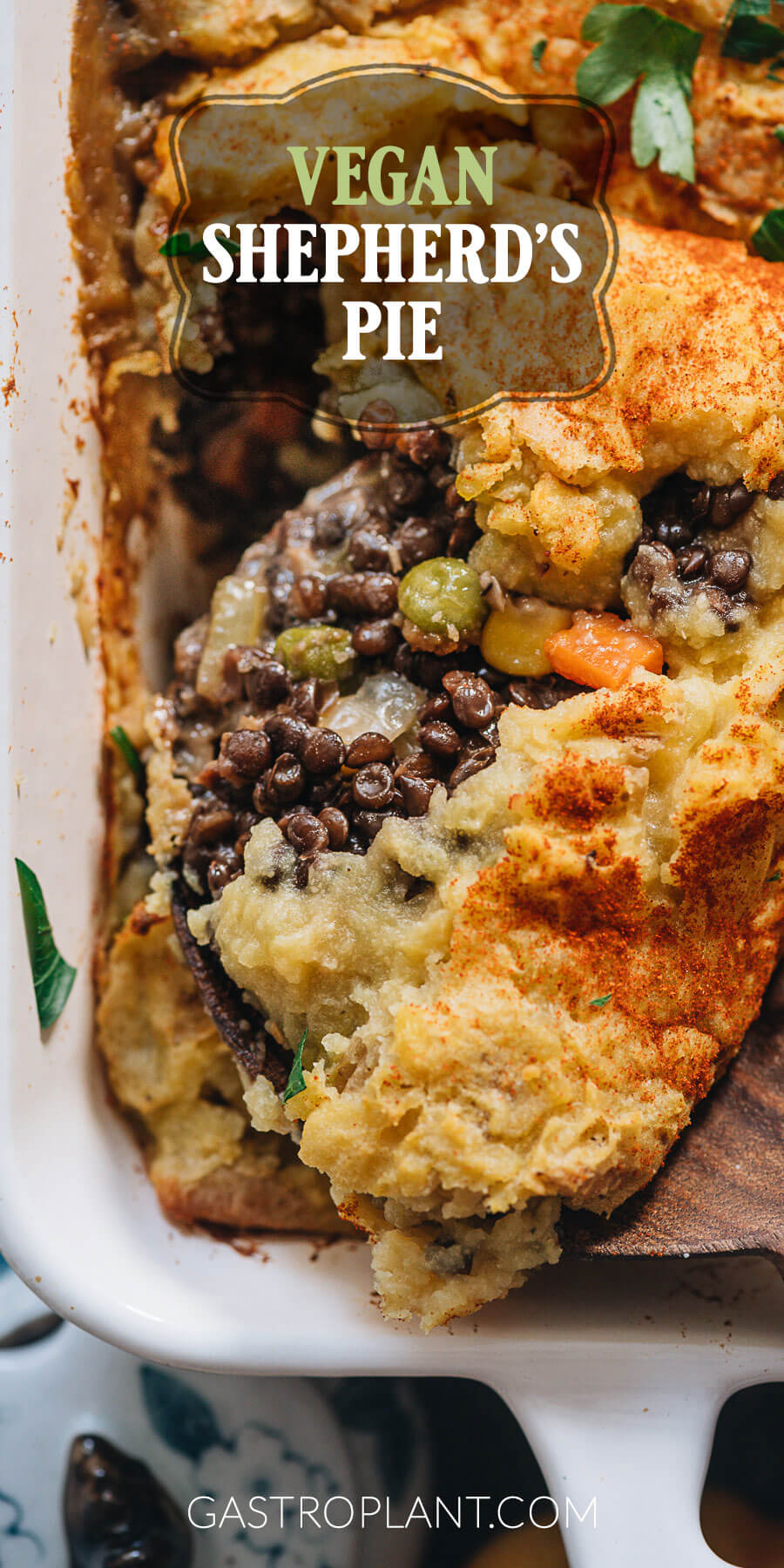