This Vegan Mushroom Gravy is velvety smooth and oozing with umami. It’s easy to make and goes with all kinds of comfort foods. Slather it on your mashed potatoes, shower it onto a veggie burger patty, or even spoon it over some noodles. 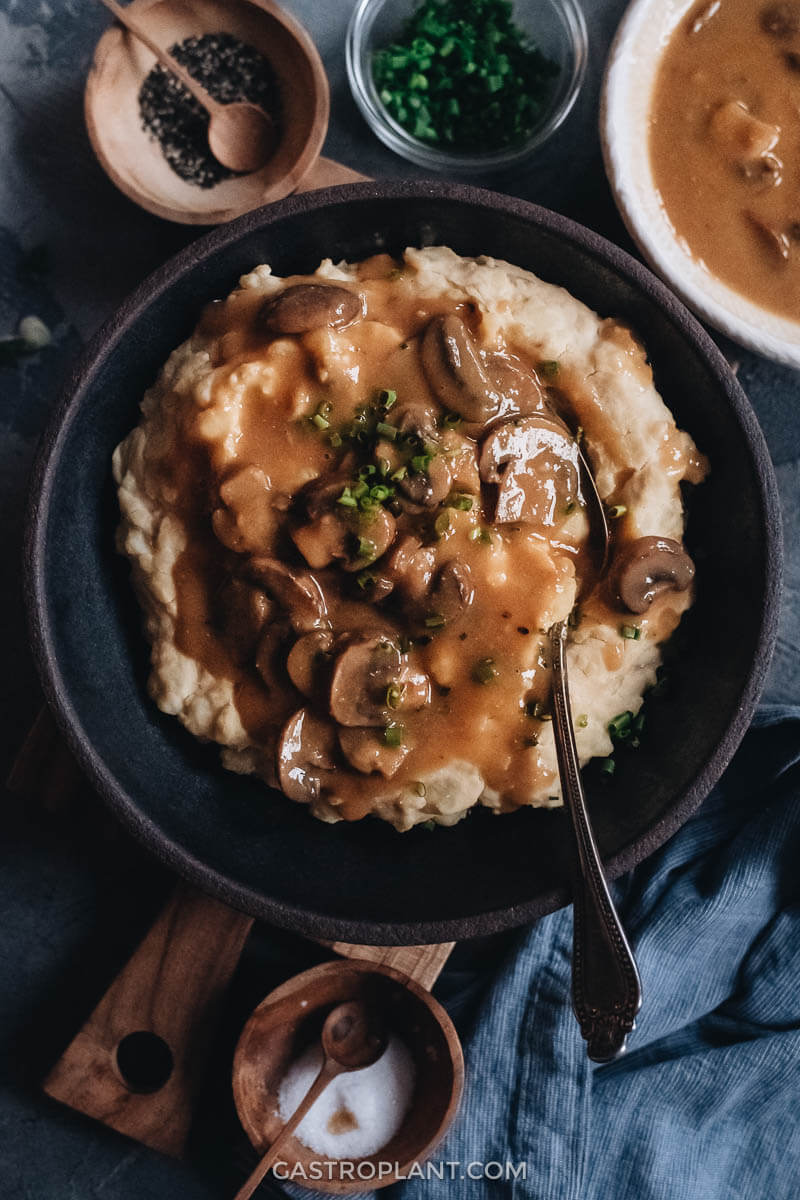 I recently wrote a guide to making vegan mashed potatoes that shine. If you haven’t read that, I highly recommend checking it out for the useful vegan food hacks it contains.

As a follow-up to that post, I wanted to share a great gravy recipe, since there’s no more appropriate companion to mashed potatoes.

This gravy recipe is about two things – a pleasant silky mouthfeel and a resounding umami flavor centered around mushrooms. I’ll explain below how we create both of these.

This gravy recipe follows a pretty common approach for making gravy, a roux, and includes some other tricks that help develop the flavor.

This means we’ll saute flour and fat together to toast the flour a bit and create a smooth texture. The dispersed flour will cause the gravy to thicken evenly and the toasting creates a satisfying bready-nutty taste.

To work the mushrooms in, we’re actually going to saute the mushrooms first, then mix the flour with the fat and mushrooms. This flour-on-mushroom cooking helps infuse the mushroom flavor into the roux. 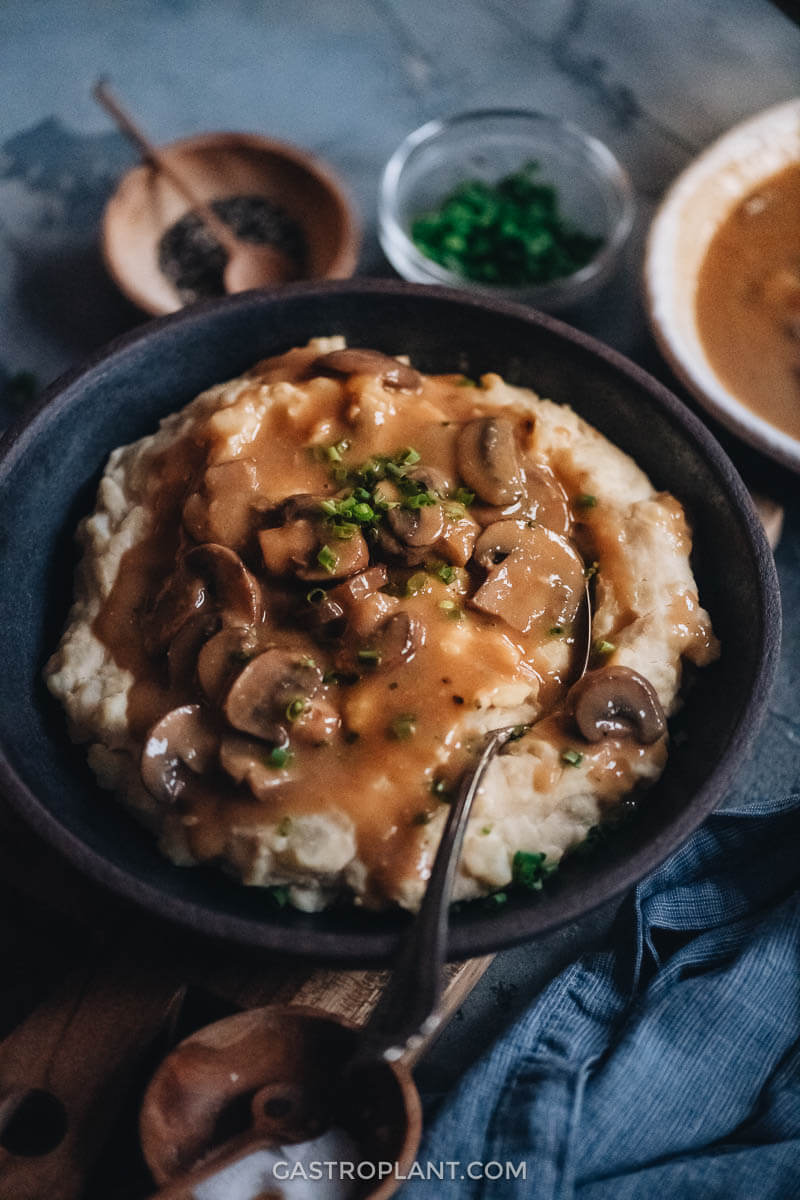 Once we’ve got the mushrooms cooked, mixed well with flour, and toasted how we like them, we’ll add liquid. I use a mixture of vegetable stock and dry sherry. Vegetable stock adds some round flavor, which is nice, but it’s sherry that brings the magic.

We’ll also want to scrape up any stuck bits from the bottom or sides at this point. They’ll be the toastiest, which means they contain the most flavor. Try not to leave any bits behind! Use a silicone spatula if you have one.

A side note about dry sherry

The combination of dry sherry and mushrooms is absolute gold. Dry sherry tastes like toasted almonds, with notes of raisin and wood. Somehow, it elevates the earthy mushrooms like nothing else can.

Boosting the flavor and simmering

In the last stage, we’ll use a few of my favorite vegan food hacks to really solidify the earthy-creamy-nutty base we’ve built with the mushrooms, roux, and sherry.

With our gravy now triple-reinforced, we’ll simmer it until it’s just the right texture.

Here are some possibilities of what you can create with this gravy: 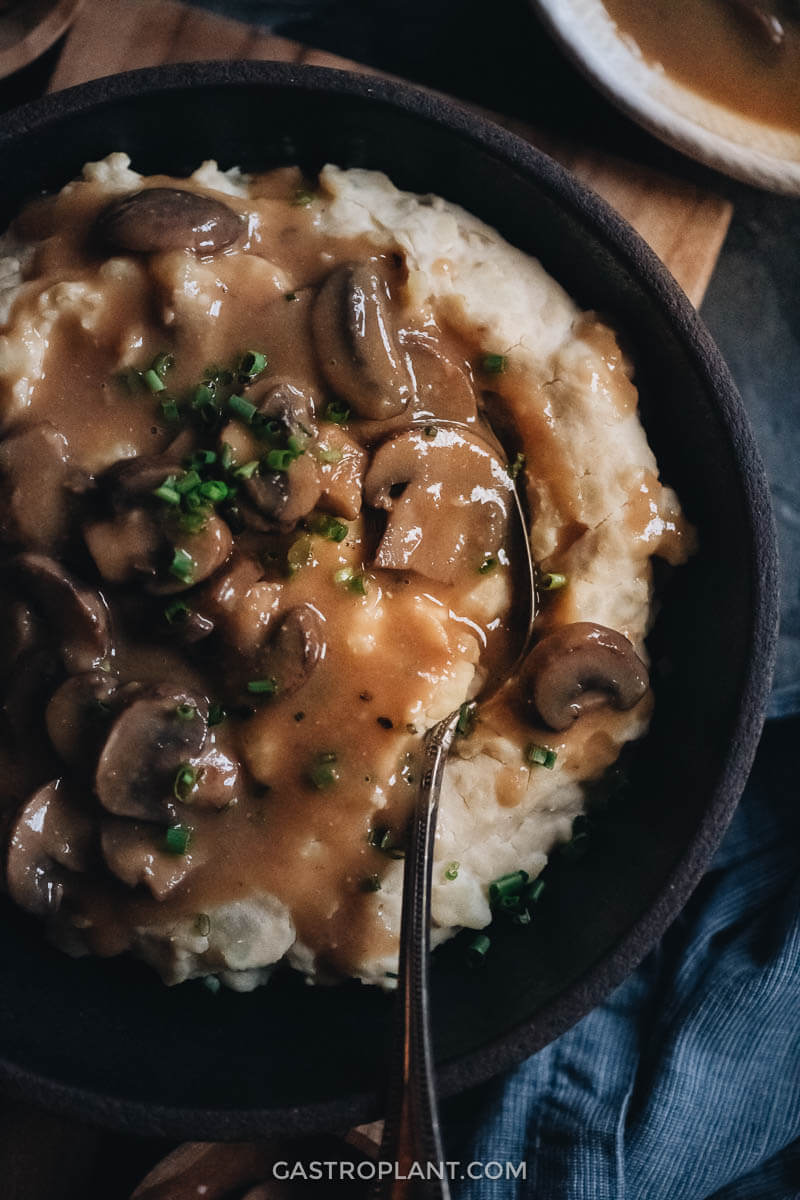 Easy veggies to add to your homestyle comfort meal

Here are the vegan mashed potatoes, if you’re looking for them.

Into saucy food? Check these out 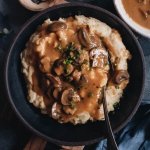 This Vegan Mushroom Gravy is velvety smooth and oozing with umami. It’s easy to make and goes with all kinds of comfort foods. Slather it on your mashed potatoes, shower it onto a veggie burger patty, or even spoon it over some noodles.
Prep Time5 mins
Cook Time20 mins
Course: Condiment
Servings: 4
Author: Thomas

You can control the nuttiness of the gravy by the degree to which you toast the flour. For a creamy white gravy you can stir the flour less than a minute. For a toasty, nutty flavor, you may toast it for as long as 5 minutes. Be sure to stir to prevent burning, if toasting for longer.
I simmered the gravy for about 7 minutes, for a moderately thick gravy. If you end up thickening the gravy too much, you can always stir in some water or stock.
I didn’t experience any separation with this gravy, but a good trick to recombine hot, separated gravy is to stir in a single ice cube. 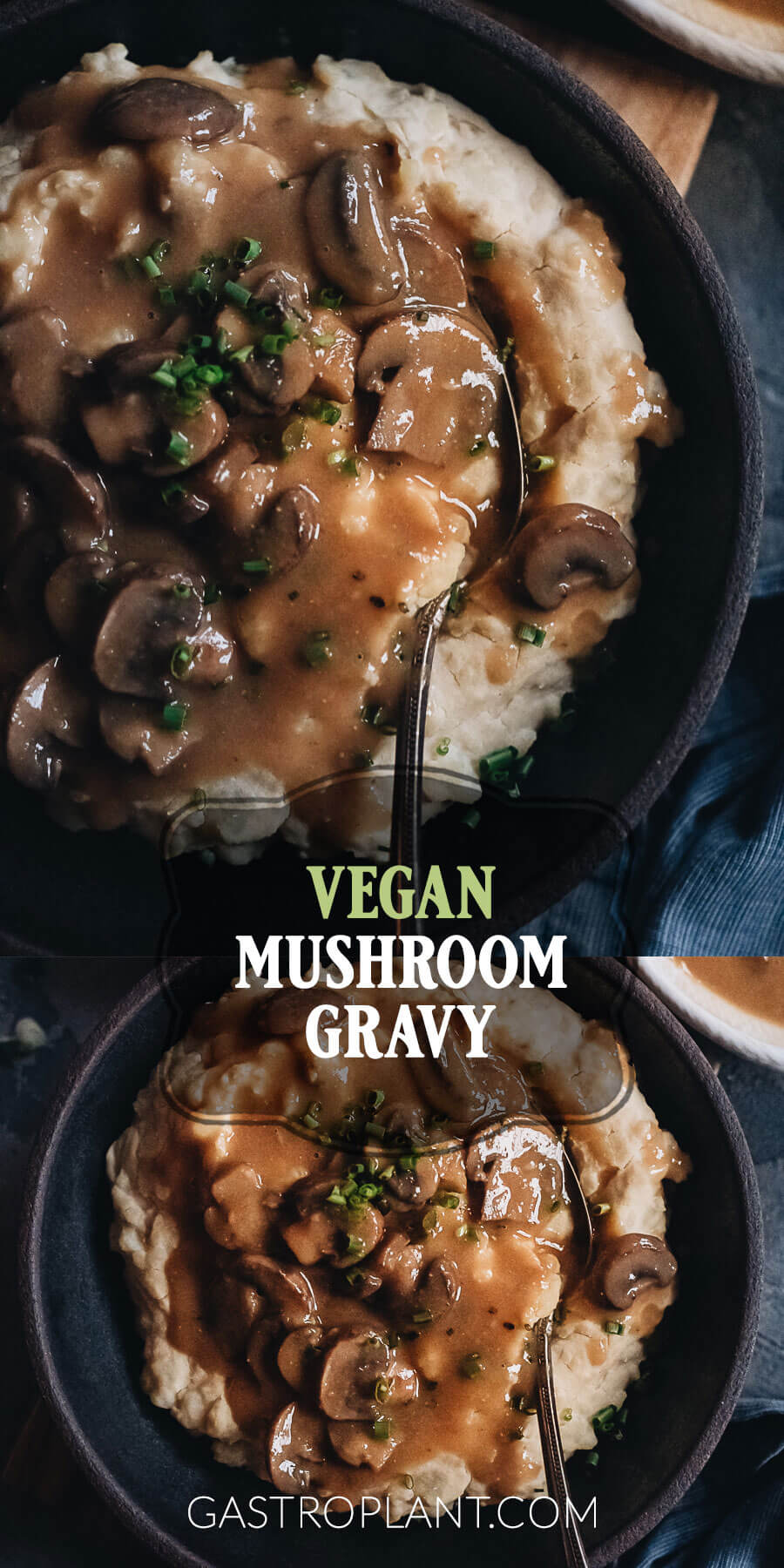