My Vegan Mac and Cheese features giant, toothy rigatoni in a silky, creamy, savory, slightly tangy, cheesy sauce. It’s an elevated take on one of the most comforting dishes of all time. For extra points, hit it with breadcrumbs and bake it for some extra textural fun. 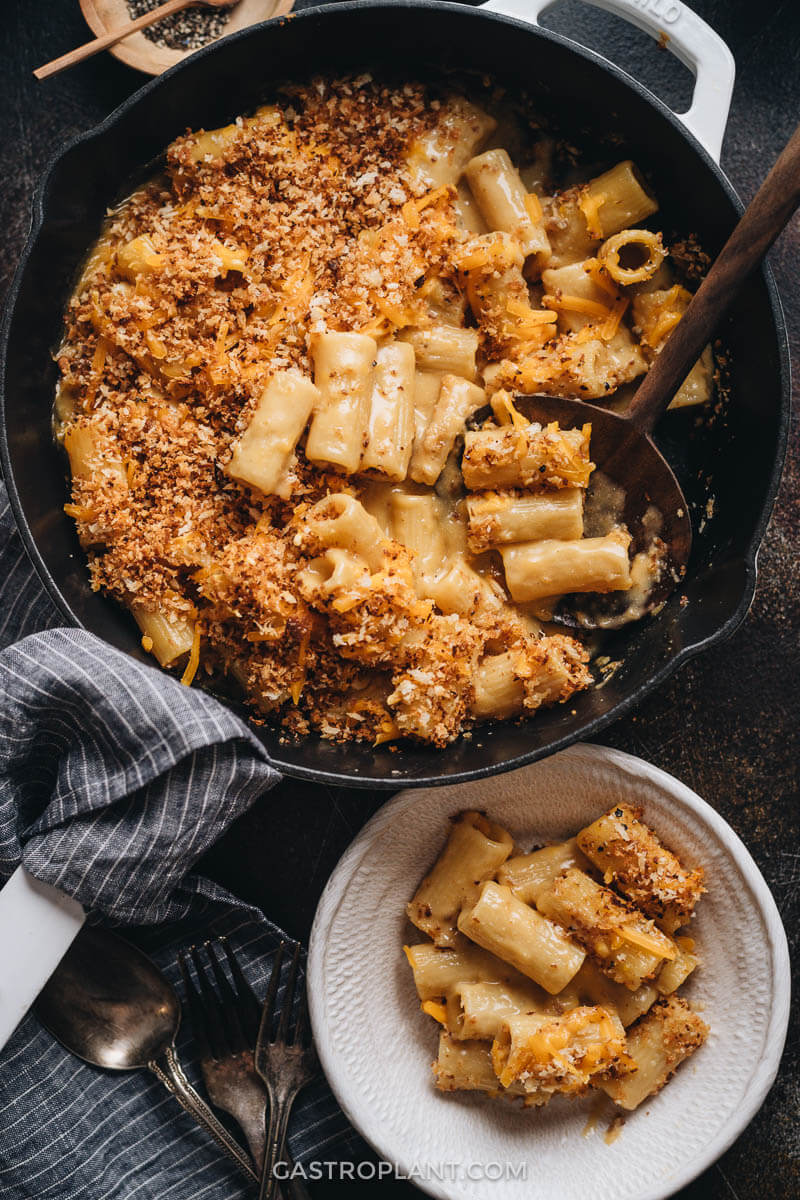 Intro to the Vegan Mac and Cheese

When I was growing up, homemade mac and cheese was a special treat. My mom would make the baked version from The Joy of Cooking, as her father used to make for her.

What I loved about that mac and cheese was the full round flavor of the cheese sauce, the nuttiness of the breadcrumbs, and the concentration of flavor that you get from baking.

I wanted to preserve the spirit of that baked mac, which has a creamy roux at the base of the sauce, as well as some clever old-school spice enhancements, as I made this plant-based version. 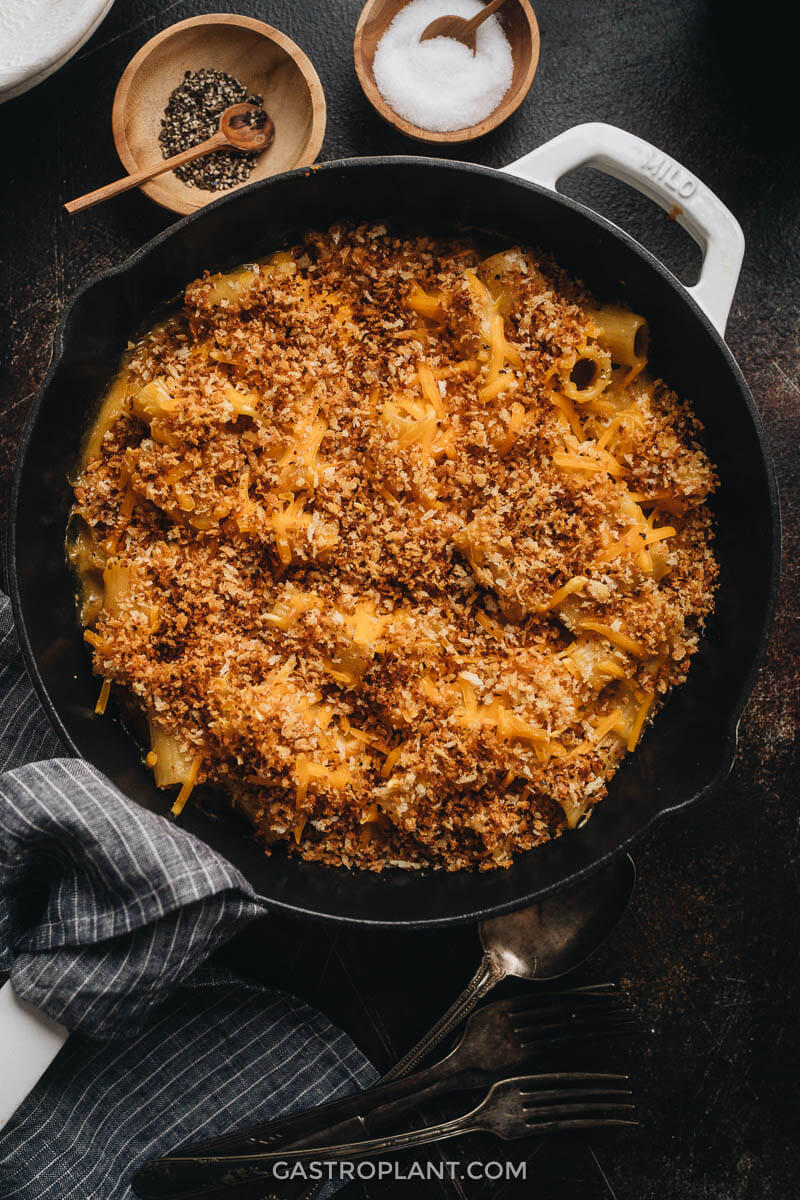 Why this Vegan Mac and Cheese Kicks Ass

I’ll be the first to admit that plant-based shredded cheeses don’t typically pack as much kick as dairy ones (for now). So I’ve included plant-based cheese but boosted it from a few different angles.

The base of this sauce is a roux (plant-based butter and flour sauteed together), which gives the sauce an extra creamy mouthfeel.

Baking and breadcrumbs add another layer of texture

While adding breadcrumbs and baking the mac and cheese is optional, it takes the dish to the next level.

The breadcrumbs are crunchy and nutty and the noodles get slightly crispy on some of the edges. And baking helps concentrate the flavor of the sauce and make it thicker and creamier. 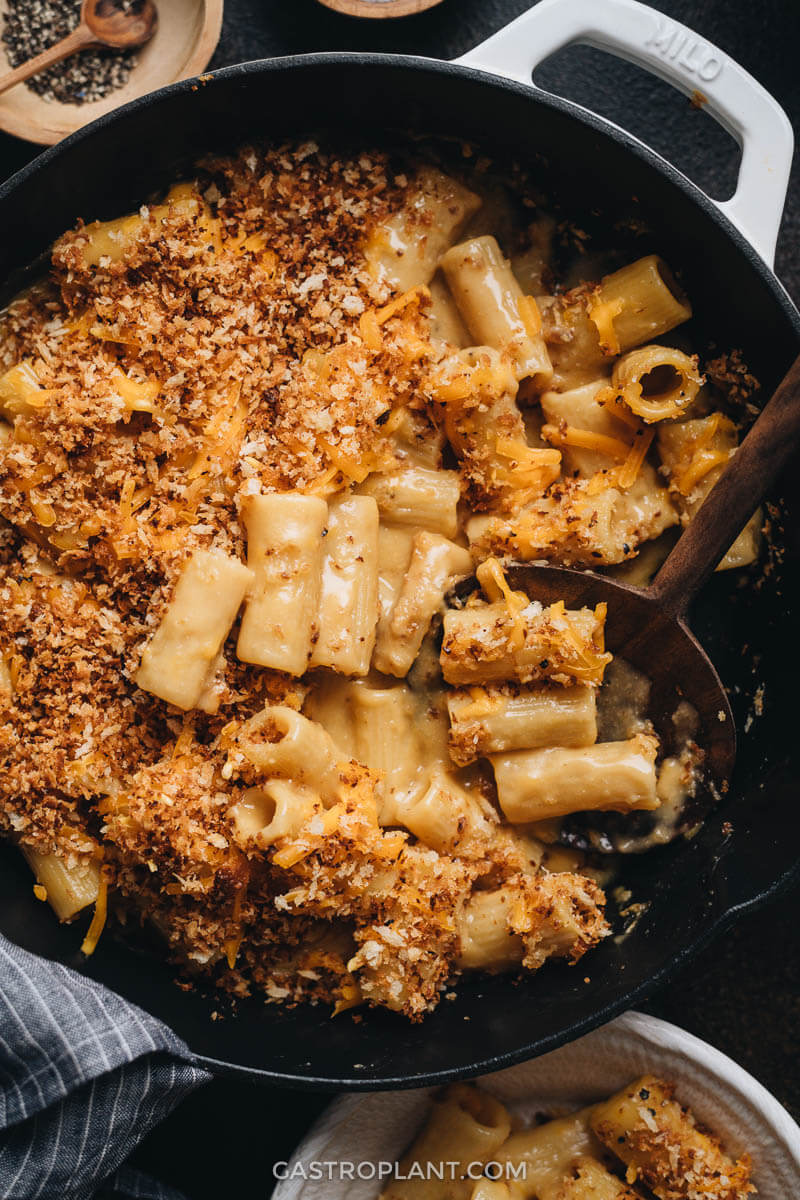 How to Make the Vegan Mac and Cheese

Most recipes just tell you to “cook the pasta”. But there are a couple things I wanted to mention:

Get a roux goin’

Do this while you’re waiting for your pasta water to boil. To make the roux, you just need to melt the plant-based butter in a hot skillet, stir in the flour, and toast it. The more you toast the flour at this stage, the nuttier the sauce will be.

Once the roux is smooth and toasted, you’ll stir in some plant milk and add the seasonings. This includes the ground mustard, garlic powder, and a bay leaf.

You’ll simmer and stir the sauce now, for about 10 minutes. This does two things:

Put it all together and bake it

You’ll add the nutritional yeast, cheese, and miso and stir until the cheese is melted and the sauce is as smooth as you want it. Stir in the pasta (which should be cooked and drained by now) and transfer everything into a greased baking dish (I used a cast-iron skillet).

Sprinkle on some toasted breadcrumbs and then bake it!

A couple of cooking notes

I had trouble getting plant-based shredded cheeses from both Violife and Follow Your Heart to melt completely into the sauce. You might try a food processor or blender if you want your sauce to be 100% lump-free (just remove the bay leaf first).

If you don’t want to bake the macaroni and cheese, you can serve it as soon as you’ve stirred in the pasta and heated it through. It’ll still be really tasty this way. 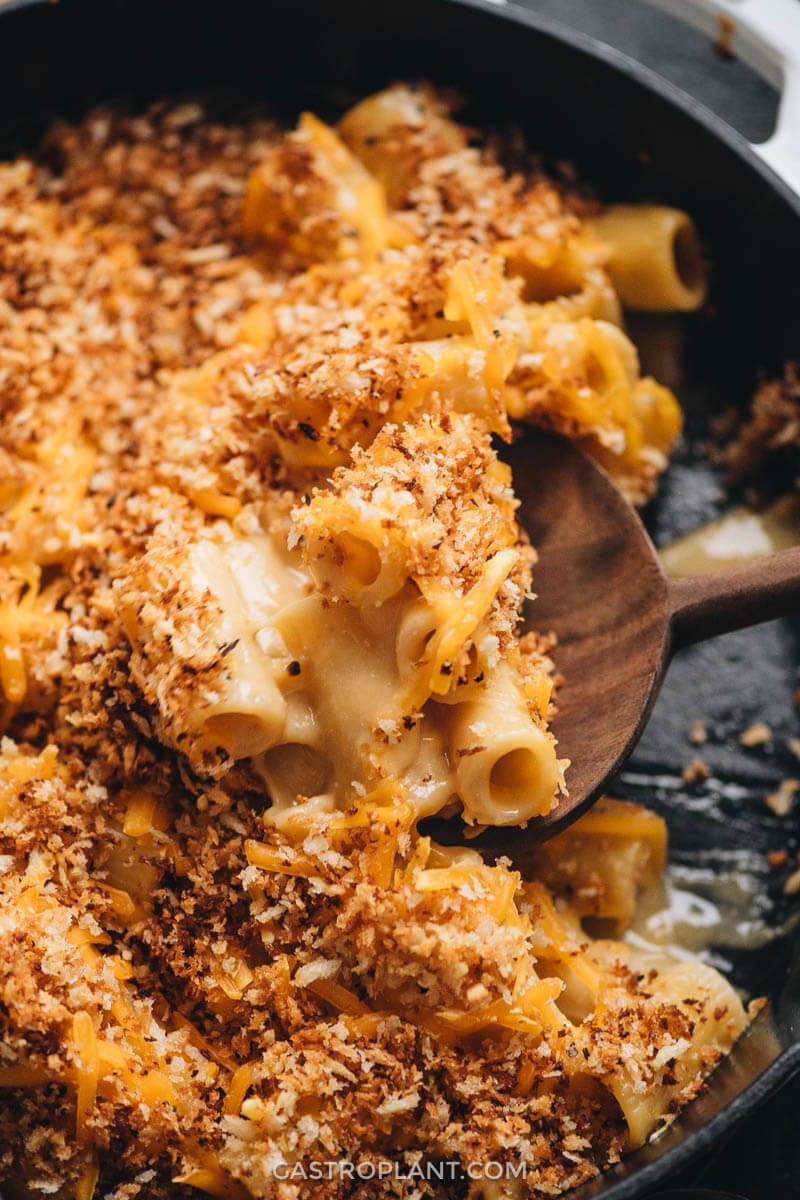 What to serve with Vegan Mac and Cheese 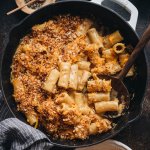 My Vegan Mac and Cheese features giant, toothy rigatoni in a silky, creamy, savory, slightly tangy, cheesy sauce. It’s an elevated take on one of the most comforting dishes of all time. For extra points, hit it with breadcrumbs and bake it for some extra textural fun.
Prep Time5 mins
Cook Time50 mins
Course: Dinner, Side Dish
Cuisine: American, British
Servings: 4
Author: Thomas

You can use as much as 12 ounces (340 grams) of pasta, though the dish won't be as saucy as shown here. I'd recommend white or yellow miso, though red will still work. Make sure your miso doesn't contain bonito or any other fish ingredients. The pasta will be fully and properly cooked once mixed with the sauce and baked.
If the recommended cooking time for the pasta is over 10 minutes, reduce the boiling time by 2 minutes; if less than 10 minutes, reduce by 1 minute. Plant-based cheese can be difficult to fully melt. If you must get rid of all the lumps, you might try a hand blender or food processor. 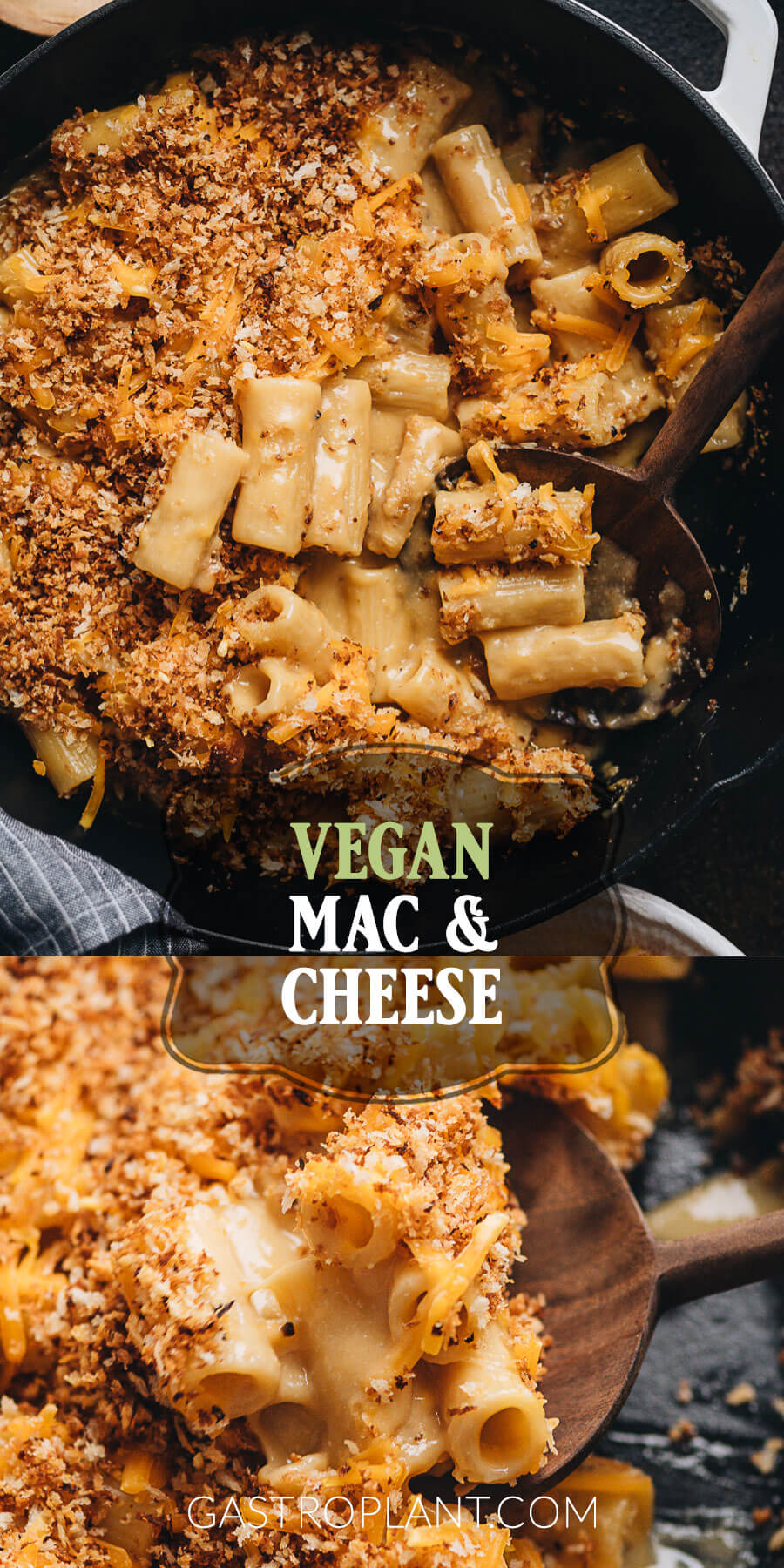