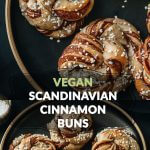 These vegan Scandinavian cinnamon buns are accented with freshly toasted cardamom and are magical when paired with a cup of coffee. The twisting braided shape looks intricate, but they’re a piece of cake to make, even for a newbie baker.

You may have noticed that I don’t share a lot of pastry or dessert recipes here. It’s true that I don’t cook a lot of those types of food but I do enjoy them from time to time, especially if I happen to be visiting a place famous for them.

I had the chance to visit a couple of Scandinavian countries before the pandemic and was impressed by the quality of pastries all over. The one that inspired this cinnamon buns recipe was the korvapuusti in Finland – it’s shaped different from the buns in the photos, but the flavor profile is about the same – a mildly sweet bread filled with a slightly sweeter cinnamon-cardamom paste and dotted with coarse grains of sugar.

I was struck by how the bun was slightly crispy on the edges yet very tender inside. And by the aroma of the cardamom. The spice stood out so that it was noticeable but not overpowering, and it made a really nice pairing with a cup of hot, bitter coffee. The memory of that cinnamon bun stuck with me for a few years and I recently had the urge to recreate it so that I could share it with family and friends.

How to Make Scandinavian Cinnamon Buns

To start, you’re going to break apart a bunch of cardamom pods (I used 40 of them) to get the seeds out, toast them in a skillet until amazingly fragrant, and then grind them finely.

This step is crucial to developing the aroma for the finished buns.

You can toast pre-ground cardamom if that’s all you have (or just want to save time). The fragrance will still develop nicely, though it won’t shine quite as bright.

Next, you’ll heat some plant milk until just warm enough to activate the yeast – 110F or 43C – and stir in the yeast and some sugar. The yeast will consume the sugar to become active.

Be careful not to heat the plant milk much higher than this, as higher temperatures can kill the yeast. If the yeast is frothing and bubbling, that’s a good sign.

Mix and Knead the Dough

Once you have a nice bubbly cup of yeasty plant milk, you’ll add it to your stand mixer (or mixing bowl) along with melted unsalted vegan butter (see note below if using salted), salt, flour, and ⅔ of the cardamom. Mix this all at low speed until you have a smooth and consistent dough.

Move the dough ball to a greased bowl, cover it with plastic wrap or a damp towel to prevent drying out, and put it somewhere slightly warm (but not hot) to let the dough rise. Good places include near (but not on) your heater, on top of the fridge, or in front of a sunny window.

You want the dough to double in size and it can take an hour, more or less.

While the dough is rising, you’ll mix up the sweet, cinnamony paste that will become the buns’ filling. It consists of unsalted vegan butter (again, see the note if using salted), light brown sugar, cinnamon, vanilla extract, and the rest of the cardamom.

It can take some work to get this mixed to a nice consistency – I like to use a fork and work in a sunny spot to help the stubborn sugar and cold butter integrate.

Roll Out the Dough, Spread the Filling, and Make Scandinavian Cinnamon Buns

After the first rise is done, you’ve reached the fun part!

When forming the buns, do your best to keep the strand snug with itself, with not much air inside. This will help the bun stay intact and prevent too much drying out.

Keep in mind that I am a total novice at baking, so don’t let this part discourage you! I promise it’s easy.

Once you have a tray of buns formed, cover it again and let them rise until they double in size, 45 minutes to an hour.

While that’s going on, preheat the oven to 375F (191C) and prepare your vegan “egg” wash of equal parts plant milk and aquafaba.

Brush the wash onto the buns and sprinkle the pearled sugar generously onto them. Try to get both the wash and the sugar into the nooks and crannies.

Finally it’s time to bake the buns. It takes about 18 minutes but might need more or less depending on the temperament of your oven.

If you’re going to enjoy the buns the day you make them, you can bake them until they’re a bit golden brown on top. On the other hand, if you want to enjoy them over time and plan to reheat them anyway, it’s OK if they are very light brown on top (slightly “undercooked” but still very nice.

If you can wait, let the buns cool on a rack for 5-10 minutes before eating. But if you can’t, get a cup of coffee or tea and tear into one. 🙂

If you’re concerned about making more buns than you can eat in a couple of days, don’t be! These buns freeze and reheat superbly. You can use either zipper bags or airtight containers to freeze them in.

A Note on Vegan Butter and Salt

If you only have access to salted vegan butter (or margarine) reduce the amount of salt in the dough to about ⅓ teaspoon. If you do this, the dough may rise a bit faster (salt slows the yeast down) but the flavor should be the same.

What is This Pearled Sugar?

The pearled sugar called for in the recipe is a Scandinavian variety of sugar that has pearl-shaped granules. (Note that there is also Belgian pearl sugar, which is used in Liege-style waffles but that is something different. What you want may be labeled “Swedish”.)

Pearl sugar is available online if you want to go in the authentic direction. You can use other large granulated sugar instead, such as sparkling or demerara if you like. You will want to use some kind of sugar topping because the dough of these buns is not especially sweet and the sugar topping helps balance the cinnamon and cardamom.

If the stretching and twisting looks too tricky or time consuming, you can use the same dough and filling to make the Finnish version of Scandinavian cinnamon buns, Korvapuusti.

To make them, starting from the point where you spread the cinnamon filling onto the large dough sheet, you roll that sheet up, cut alternating and slightly diagonal chunks from the roll, and then let them rise. Once they’ve risen again but before you apply the “egg” wash, press each bun gently to form the classic “earplug” shape. (See this link to get an idea of what it looks like.) Then wash, sugar, and bake them as prescribed in my recipe.

It’s been a joy to recreate these buns and share them with family and friends over the past few months, since they’re unlike any cinnamon buns or even pastries you can find in the US. If you’re looking for something special and slightly sweet for breakfast or even dessert, I hope you give them a try.

Whether you make these buns or not, if you enjoy using cinnamon in your food, you might check out this short video. It’s a lighthearted reminder not to take everyday ingredients like cinnamon for granted. 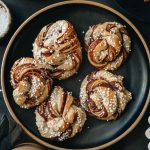 Break, Toast, and Grind the Cardamom

Roll the Dough and Form the Buns

Allow to Cool (if you can wait) and Enjoy

The recipe as written makes between 12 and 16 buns, depending on how large you make the buns. You need 1 Tablespoon of whole fresh cardamom and I used about 40 pods to get this. You can use 1 Tablespoon of ground cardamom instead, though the aroma won’t be as rich. If using salted vegan butter, reduce the salt to ⅓ teaspoon If mixing by hand, after combining all the ingredients and mixing to integrate a bit, transfer the dough to a floured surface and knead until smooth, about 10 minutes. It is OK if you remove the buns before they are golden brown if you like the texture a bit softer, after 14-15 minutes. This is also good if you intend to save and reheat the buns.
106 shares
Previous Post: « Vegan Spinach Artichoke Dip
Next Post: Easy Fennel Arugula Salad »