This Vegan Carbonara Spaghetti has a silky, umami sauce and smoky, chewy “bacon” made from king oyster mushrooms.  It tastes like it’s loaded with egg and cheese but contains neither. Takes just 20 minutes to cook. 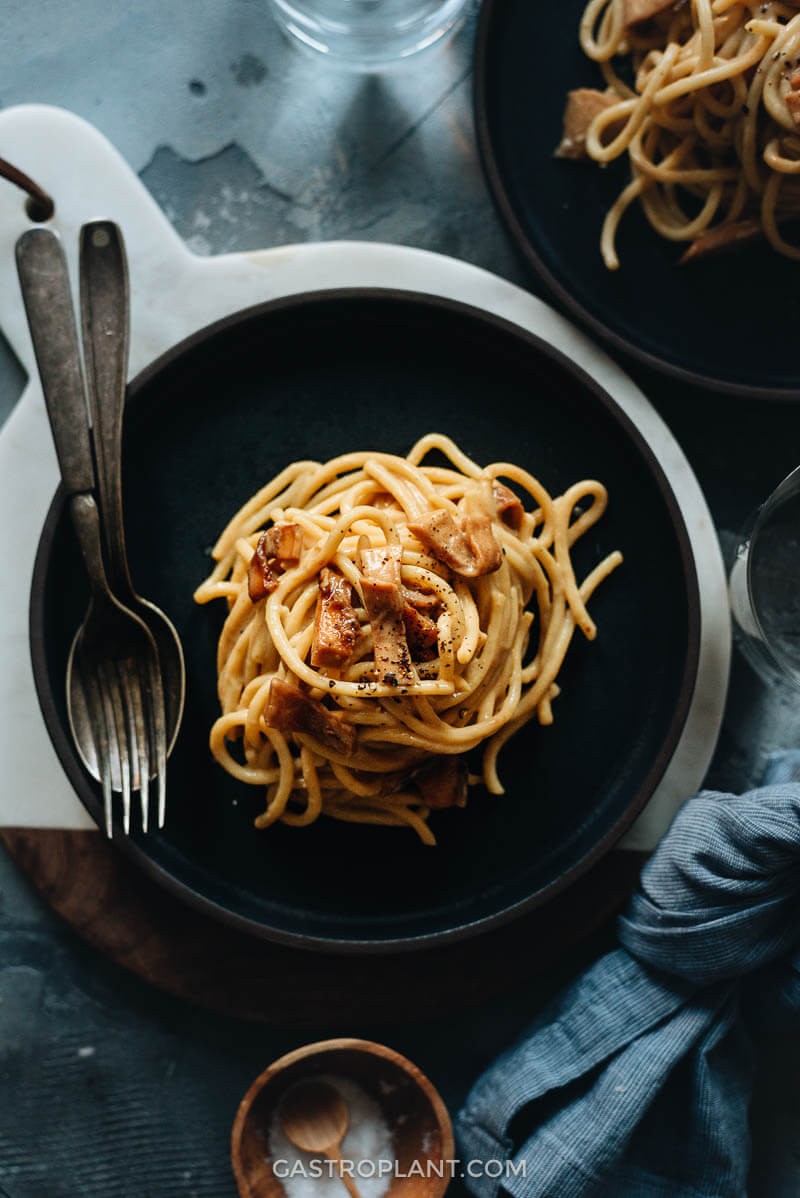 An Intro to Vegan Carbonara

A few weeks ago I developed and shared a recipe for Primavera Pasta. It has a light and tangy cream sauce made from silken tofu and miso. My wife and I both enjoyed that one a lot so I wanted to continue experimenting with tofu-based pasta sauces.

I actually used a carbonara recipe as my starting point for that recipe, so I went ahead and developed this recipe from it as well. 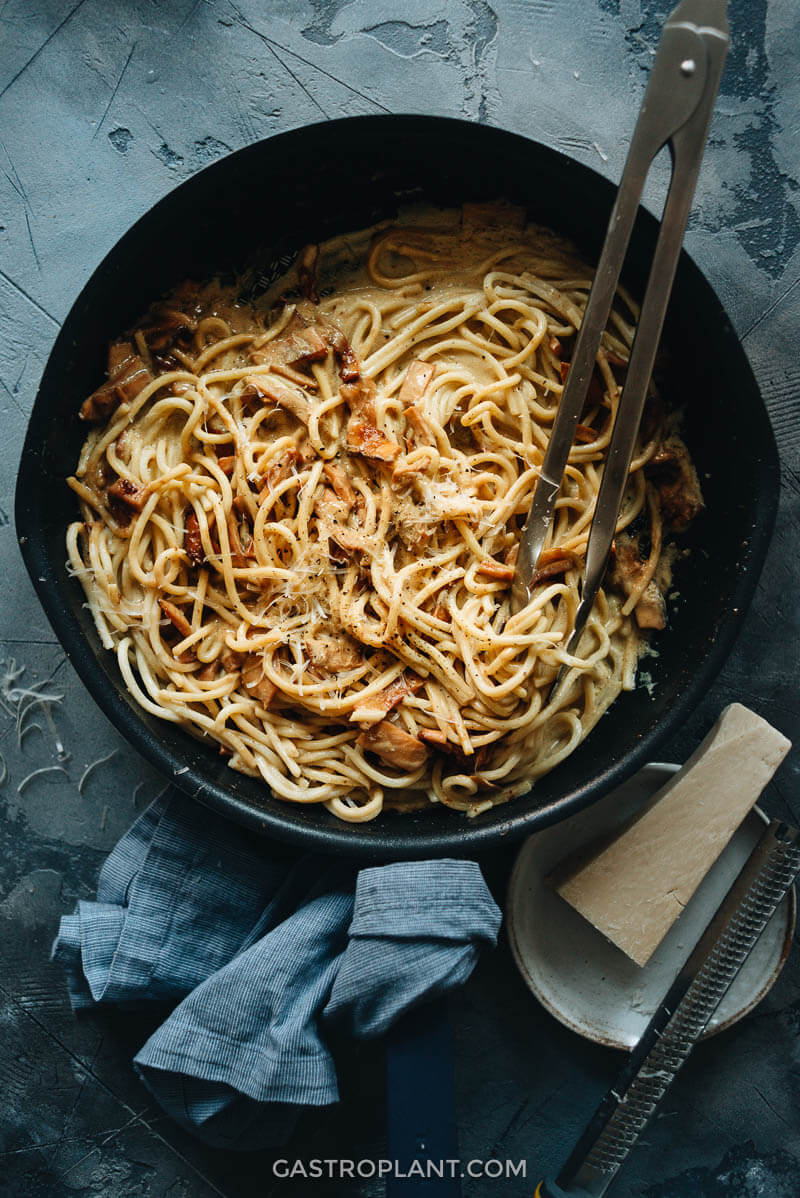 Why Make this Vegan Carbonara?

I made some tweaks to the recipe to emphasize the things I really like about carbonara pasta – the richness of the sauce and the smokiness of the “pork”.

The sauce is really rich and almost eggy-tasting due to the addition of “black salt” (aka kala namak) which is actually light pink in color. The original carbonara relies heavily on egg yolks so I used black salt to bring the dish closer in line with the original.

For the cream-and-cheese part of the sauce, I was inspired by Daniel Gritzer’s recipe on Serious Eats, which cleverly imitates the tangy essence of sheep’s milk cheese with sauerkraut brine. It also includes nutritional yeast and miso, two of my favorite vegan sauce ingredients.

Traditional carbonara recipes use some type of cured pork product (guanciale, pancetta, bacon). It adds an oily mouthfeel, some umami, sometimes smokiness, and a fatty-chewy texture to the dish. I adapted my shiitake bacon recipe to be made with king oyster mushrooms and used here. 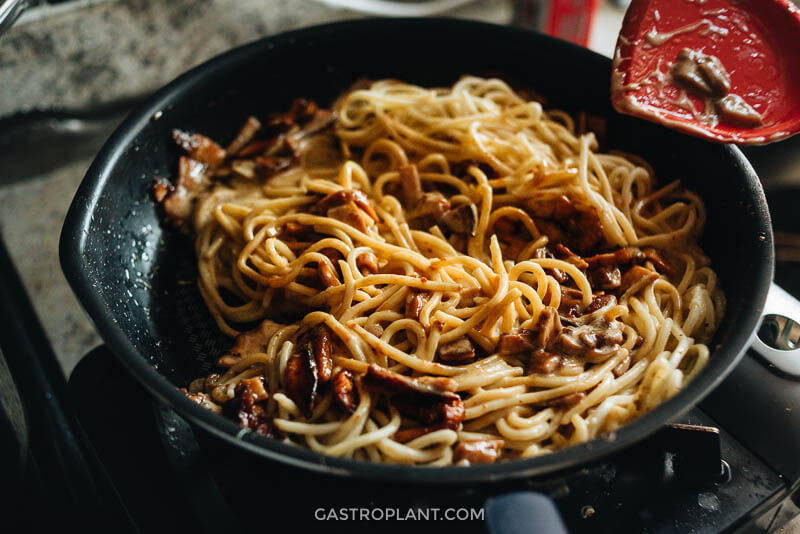 There are four basic components to this recipe:

The easiest and quickest way to make this dish is to start heating the pasta-boiling pot, then prep and marinate the mushrooms. While the water is heating and the mushrooms marinating, blend the sauce ingredients together. You can boil the pasta and fry the “bacon” (once it’s done marinating) at the same time.

Multitasking like this allows you to really speed this recipe up. 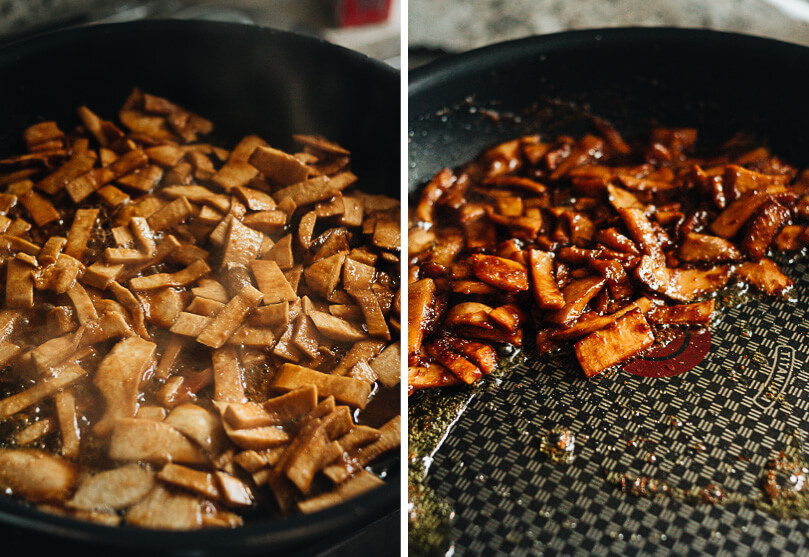 A Few Notes Before You Start

If you’re not familiar with black salt (aka kala namak), it’s available in Indian grocery stores and on Amazon. It adds a subtle sulfurous “eggy” taste to dishes. It goes nicely in tofu breakfast scrambles for this reason.

On the topic of black salt, don’t freak out when you blend the sauce ingredients together and the sauce smells super eggy. This is normal and not representative of the actual flavor of the sauce. The sauce will be much, much milder.

In this dish, it’s best to use a fairly thick, long pasta, such as this artisanal spaghetti from Italy. For affordable quality, you can’t go wrong with the thick spaghetti from Barilla which is available at most grocery stores. And for a lower-carb protein boost, I really like black bean pasta, even if the texture is a bit different. 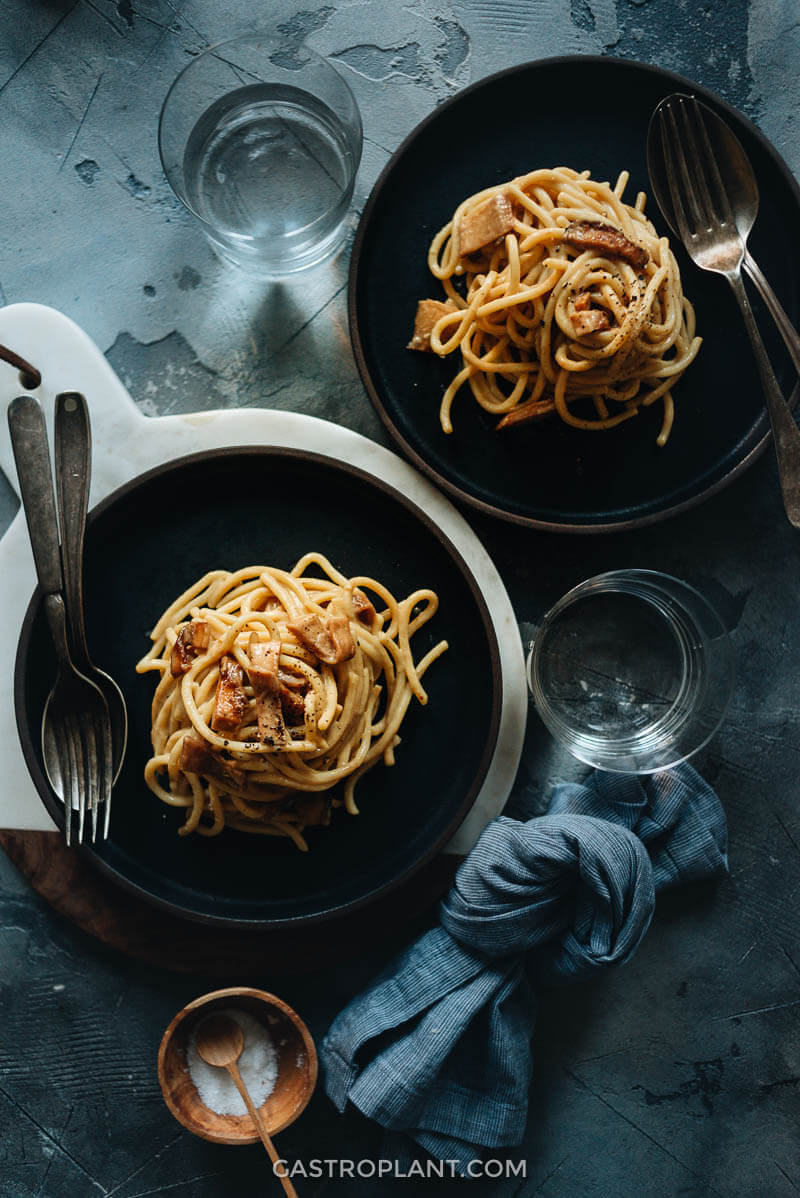 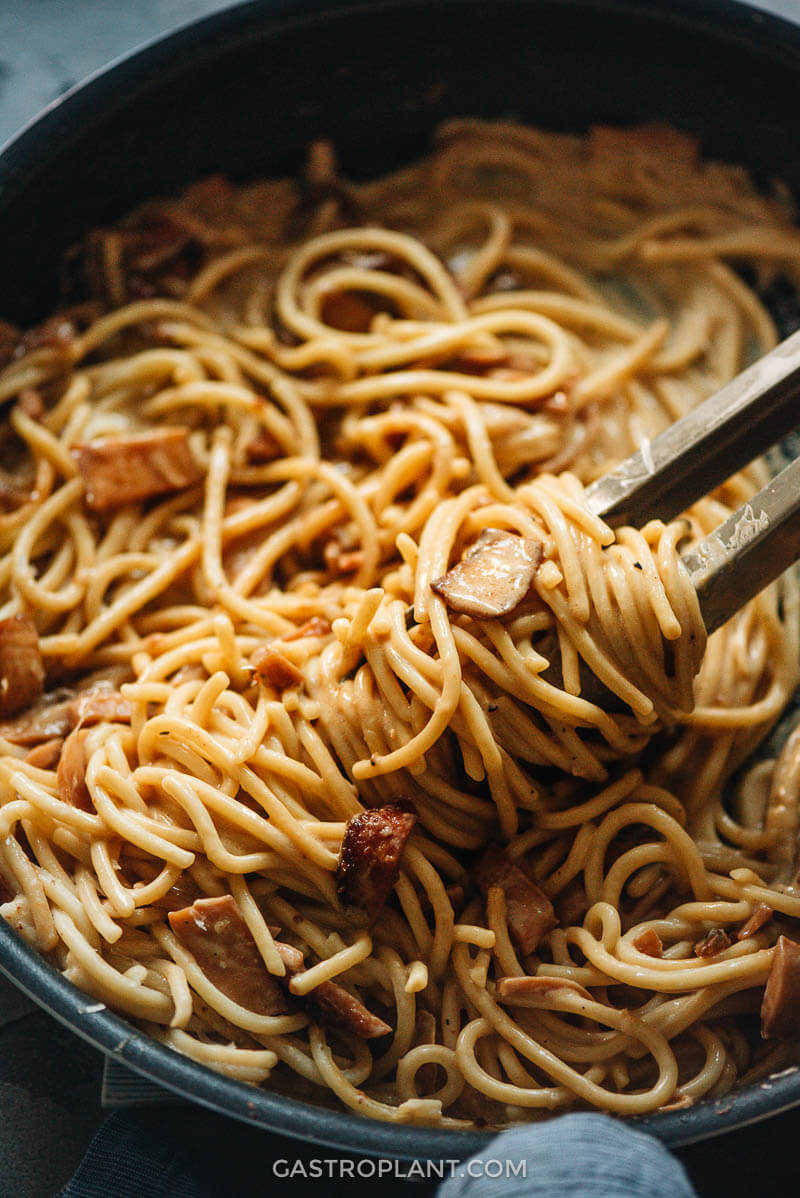 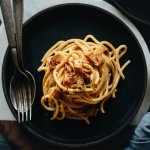 Set the pasta water to boil

Prepare and marinate the mushrooms

The amount of pasta you use depends on personal preference. Less pasta means a saucier dish.