This Vegan Udon Noodle Soup features a homemade vegetable broth with a smoky umami, a variety of fresh veggie toppings, and crispy tofu. It’s a bowl of instant comfort on a cold day. And the soup makes a great tempura dipping sauce. 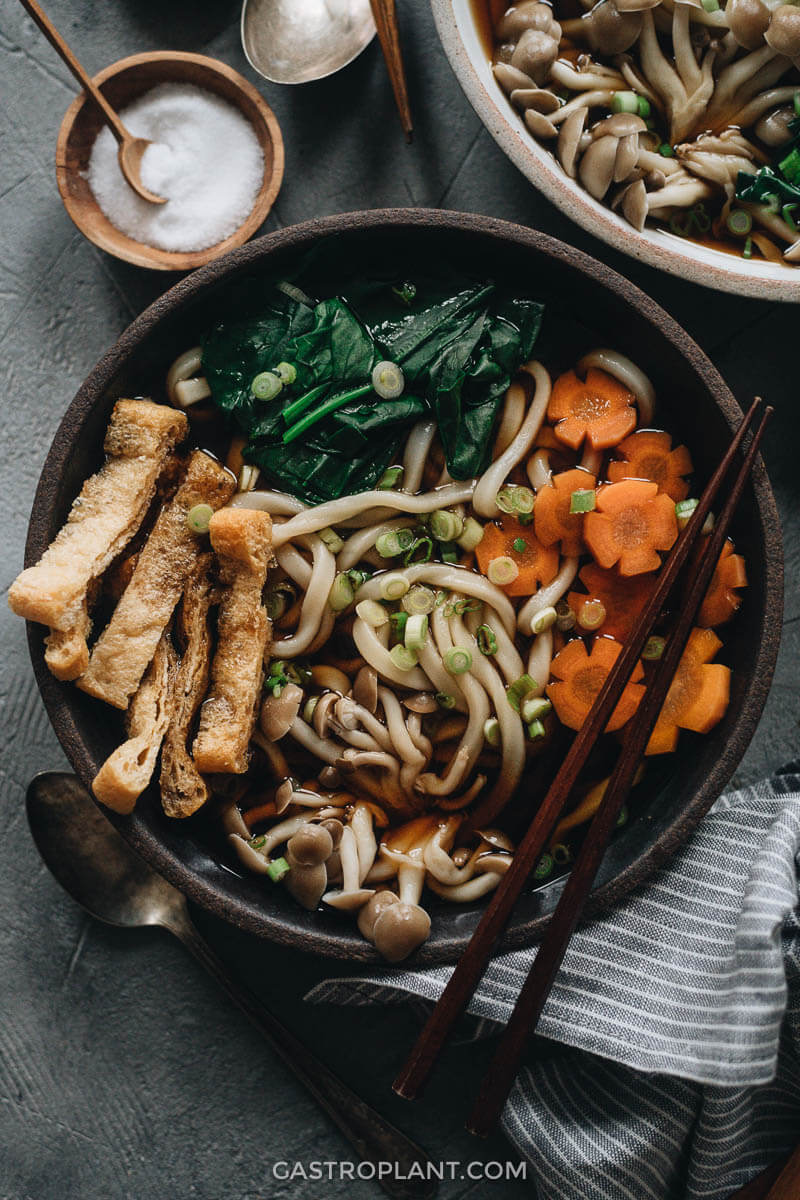 Several months ago, when I was developing a recipe for Vegan Yaki Udon, I stumbled upon a broth formula that I thought would work really well for udon soup. It wasn’t exactly prime soup season then, so I decided to hold off.

It’s a comforting dish for cooler months. It has extra thick, chewy noodles swimming in an umami, slightly sweet, and barely smoky broth. The noodles and broth are pretty satisfying on their own.

For some variety, color, and nutrition, I topped with crispy tofu, spinach, mushrooms, and carrots.

I’ve been enjoying this soup over the past couple of weeks and wanted to share it with you. 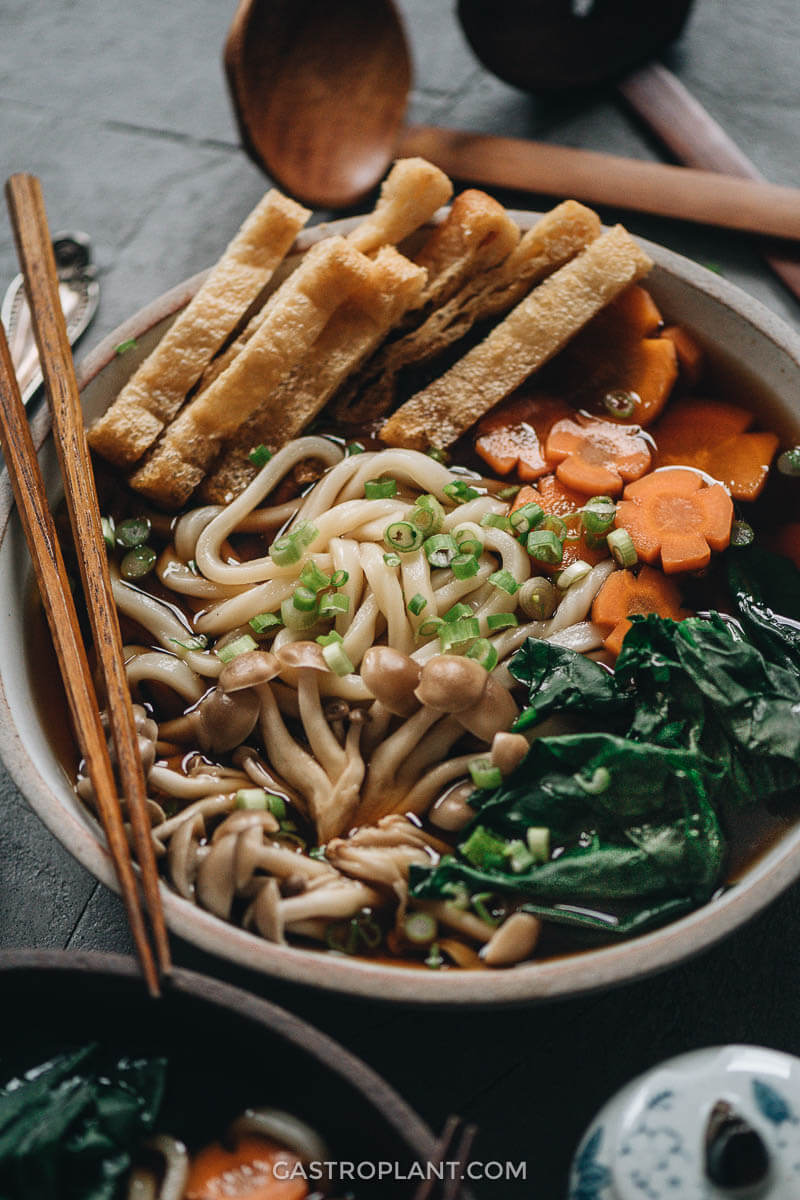 What makes this soup tasty

With the broth, I tried to emulate what makes the original version tasty. The flavor profile is based around kombu (seaweed), dried mushrooms, soy sauce, mirin, and liquid smoke.

At the base of the broth is a homemade vegetable stock made from carrot, daikon, and ginger. This stock adds a roundness, a little bit of sweetness, and a layer of fragrance to the soup.

The result is a noodle soup that is rewarding and satisfying on the surface and subtle and complex if you examine it. 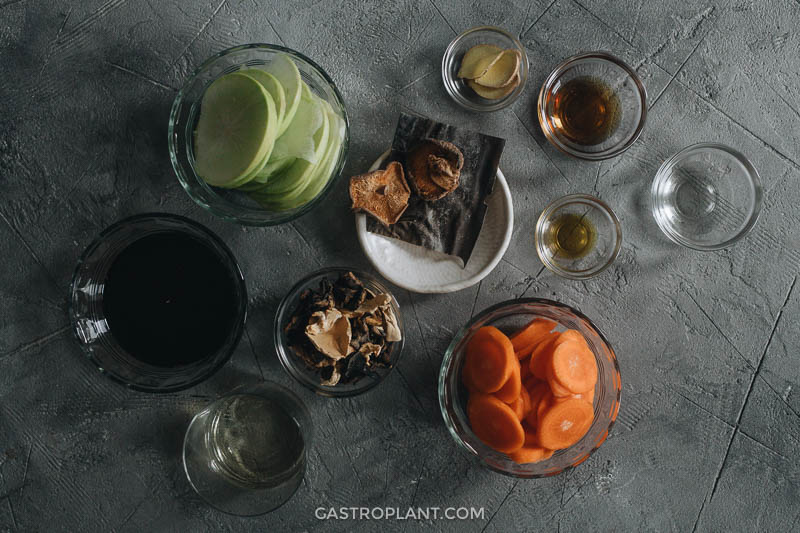 I want to emphasize how good it feels to bite into udon noodles. They contain a combination of wheat flour and tapioca starch and are some of the bounciest noodles I’ve ever tried.

If you haven’t had the super-thick udon before, I highly recommend checking them out. They are usually sold frozen.

I chose toppings for this soup that I thought would be pretty familiar and comforting.

The spinach, carrots, and mushrooms are simply blanched and taste like themselves.

I added aburaage (Japanese fried tofu sheets) as a fun sort of wild card ingredient. Simply bake the aburaage to turn it into a supremely crispy (think pork rinds or Cheetos) textural bite. 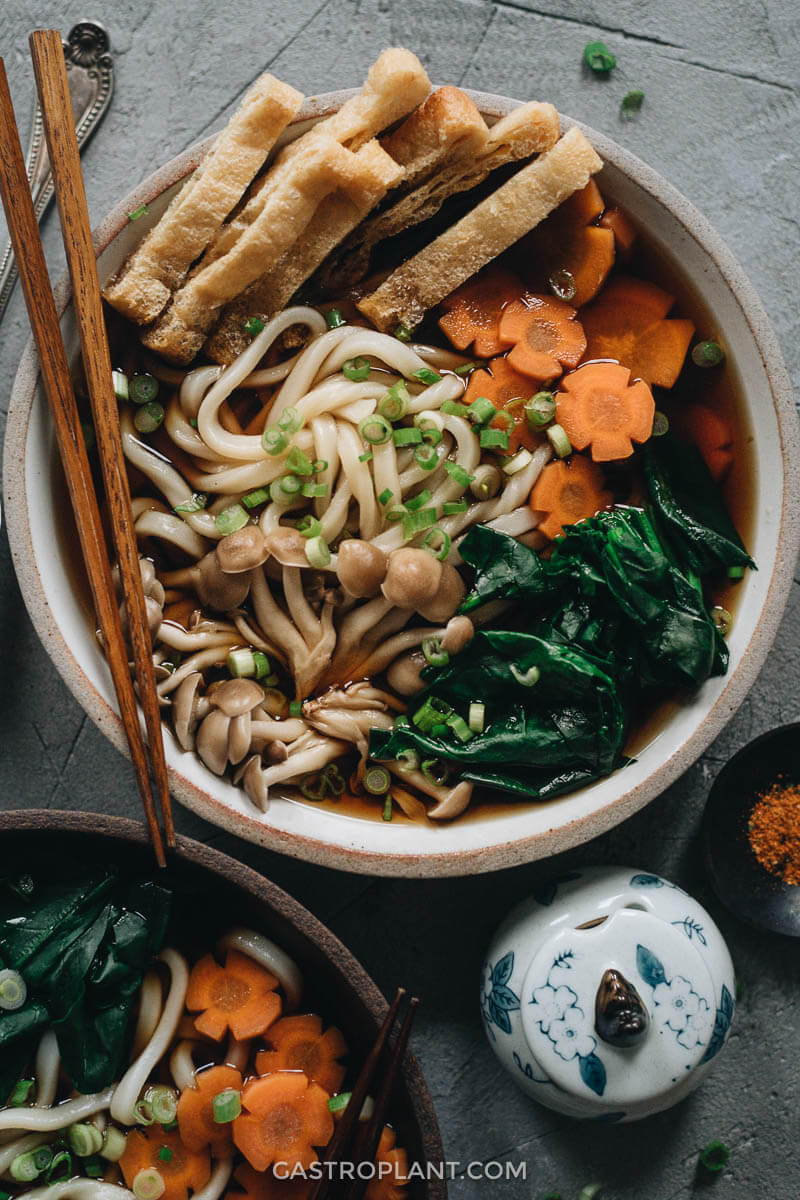 Using the soup as a dipping sauce

One thing struck me as I slurped this soup – the flavor was also on-point for a tempura dipping sauce.

I plan to make a plant-based tempura guide at some point in the future. But for now, check out this super clever (and possibly more traditional) vegan tempura recipe from the NY Times.

Also, do try dipping anything and everything that’s crispy into the soup base. The aburaage in the recipe should give you a taste of that brothy-crunchy experience. You’ll see what I mean. 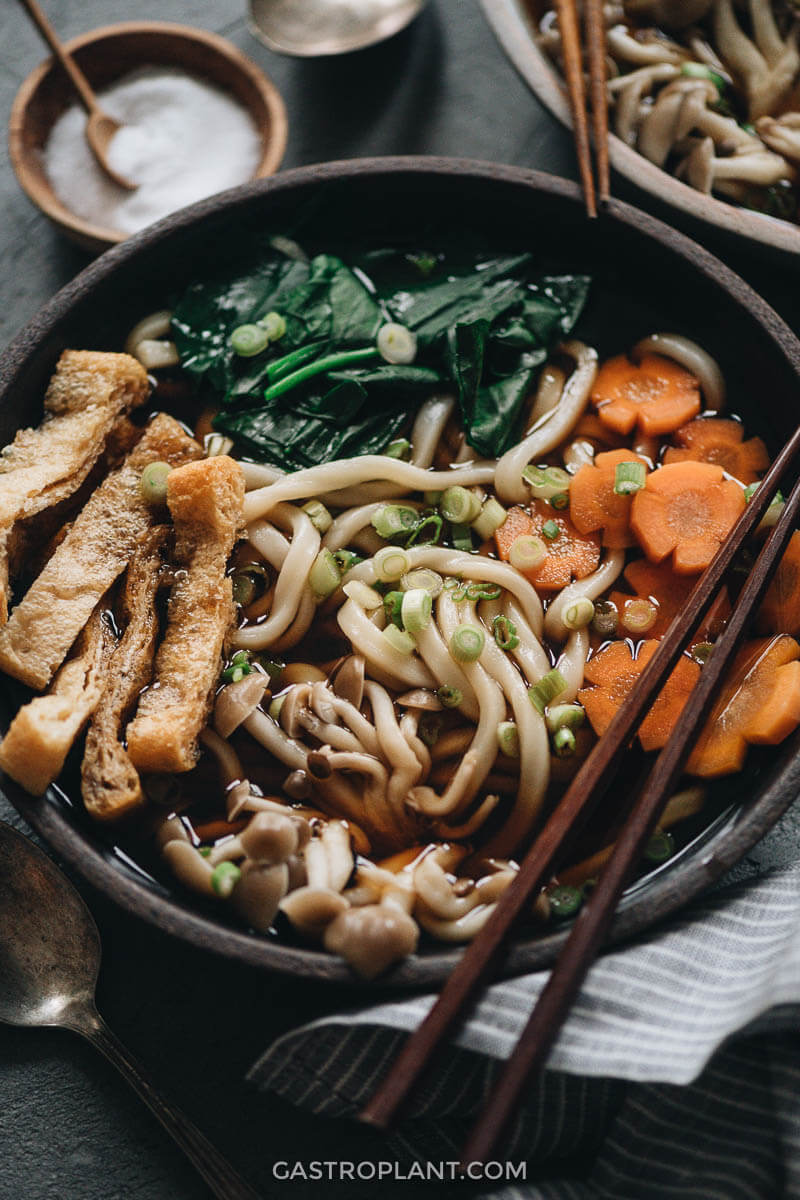 Some notes before you start

Try to use frozen (or fresh) udon noodles if you can, since they have the best texture by far. Dried udon won’t be the same, but it will still be tasty.

I’ve tried this broth with soba noodles and it was delicious. If you’re only working with dried noodles, you might try soba instead of udon.

If you’re short on time, you can use store-bought vegetable stock and skip some of the simmering time. 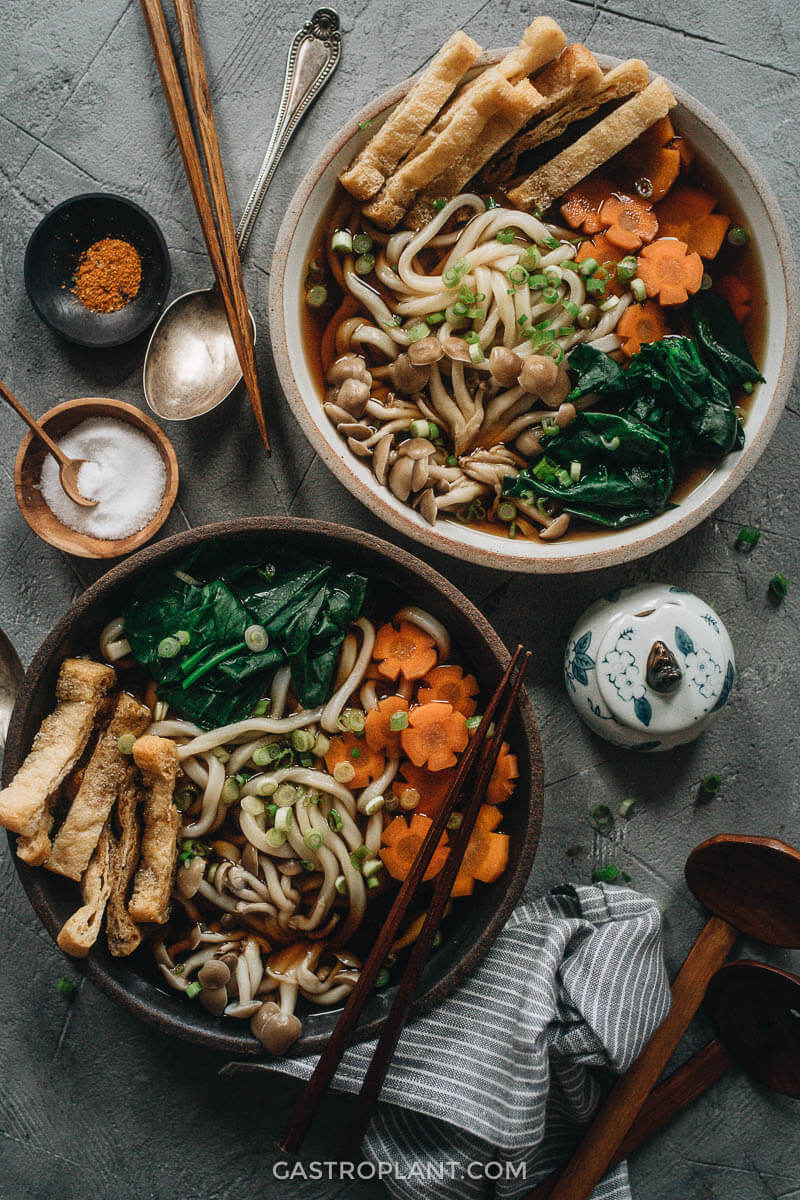 Plant-Based Side and Appetizers to go with the Udon

Addicted to noodle soup? Check out these plant-based ramens 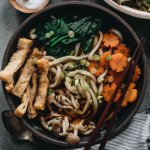 While the Stock is Simmering, Prepare the Noodles and Toppings

The recipe will create more broth than you need for 2 servings. You can make a third serving if you like, or use the extra soup for a dipping sauce for tempura (or other crispy food). If you’d like to save time, you can use 6 cups of packaged vegetable stock instead of the ingredients listed here under “Vegetable Stock”. Still, you may want to infuse the packaged vegetable stock by simmering the kombu and shiitake mushroom in it for at least 15 minutes. I use a blend of white, brown, oyster, and black trumpet mushrooms. You can use any kind of dried mushrooms you like, or replace them with an additional dried shiitake mushroom. Fresh and frozen udon noodles will have the best texture by far. If you are going to use dried noodles, dried udon will work but won’t be the same. Dried soba will work in this recipe too. 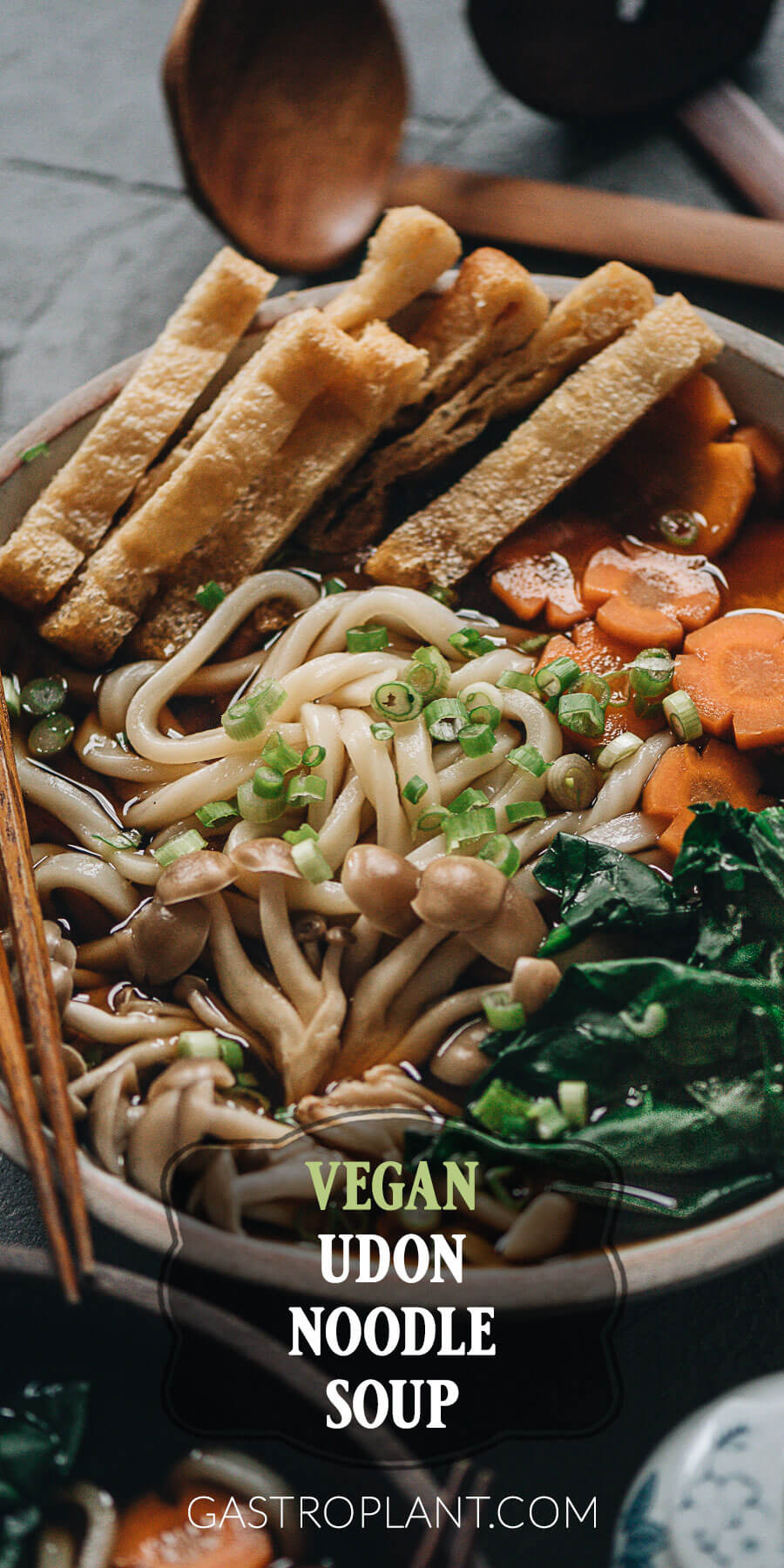