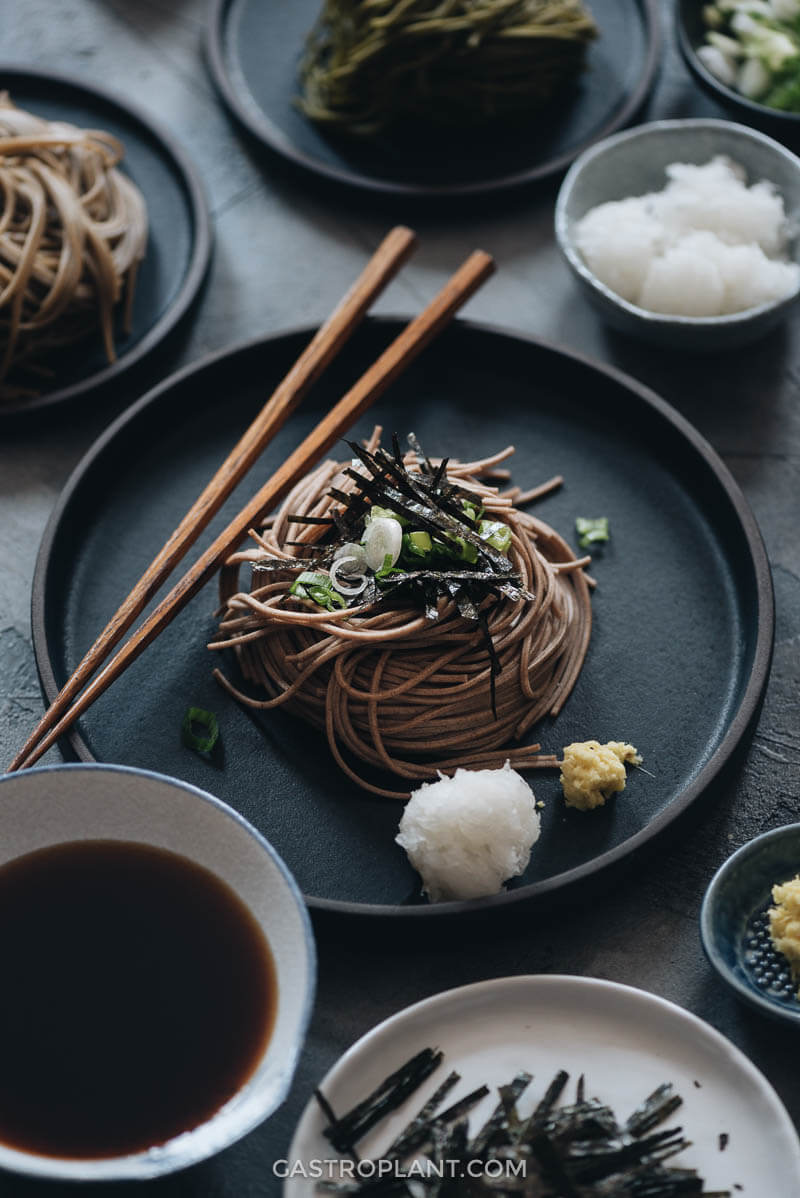 Cool and Cooling Food For Summer

This is my first summer in a long time where I’ve felt the need to maximize the number of cooling and refreshing foods I eat. Until a few months ago, I had been living in Texas, where it gets plenty hot, but there’s also abundant air conditioning everywhere, so I was often isolated from the heat.

In New York, while we do have AC in the apartment, it can only do so much to cool the place when we have the gas-powered stove and oven running. Sometimes it gets pretty toasty. And getting from place to place in the city, it’s hard to avoid getting warm in the humid summer weather.

If I had to guess, I’d say at least half of the recipes I’ve shared this summer were intended to be refreshing, relaxing, and cooling. For your benefit and for mine. I’m sharing this Zaru Soba recipe for the same reason.

This dish, while pretty simple, has been a couple of months in the making.

There’s a Japanese broth called “tsuyu” that can either refer to the dipping sauce (as used in this recipe) or a soup broth served together with noodles and other ingredients. Tsuyu can also be served hot and with Udon noodles and as a dip for tempura.

I started experimenting with vegan tsuyu when I developed the Yaki Udon recipe. I also toyed with a hot udon tsuyu, which I’ll eventually share with you here. 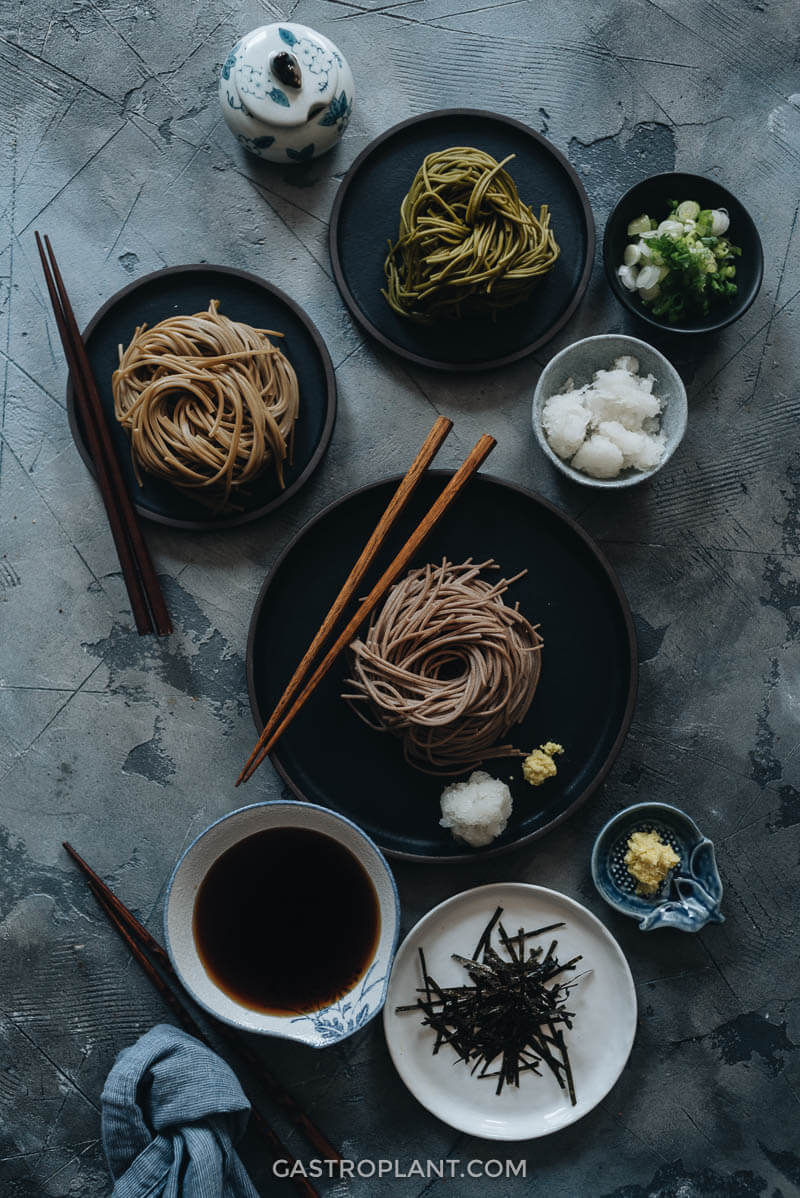 Soba noodles are a particular kind of wheat noodles made from buckwheat (and often also regular wheat) flour. They have a slightly earthy taste and a certain graininess to their texture. To the tooth, they are plenty chewy, but the small buckwheat grains give them a rustic feel.

Compared to other dried noodles, they are higher in protein and fiber. They also contain all eight essential amino acids, which is extremely rare in noodles. One could say that generally, soba noodles are more nutritious than udon, somen, or other pure-wheat noodles.

I used three different varieties when testing this recipe, one made from buckwheat and wheat flour, one with green tea, and one with roasted green tea (hōjicha). (It turns out that last one is not especially common.)

The noodles have slightly different textures and flavors. The ones containing tea have smoother textures and notes of the teas they contain, but less of the buckwheat-y graininess.

There is also a variety made from 100% buckwheat, called juwari soba. These are gluten-free because they don’t contain any actual wheat. Their texture is more grainy and brittle and less chewy than the ones containing wheat flour. And the flavor is going to be earthier.

For more on Soba, check out Just One Cookbook’s soba page. That site is my go-to resource for Japanese food and there is a ton of helpful and interesting info there. 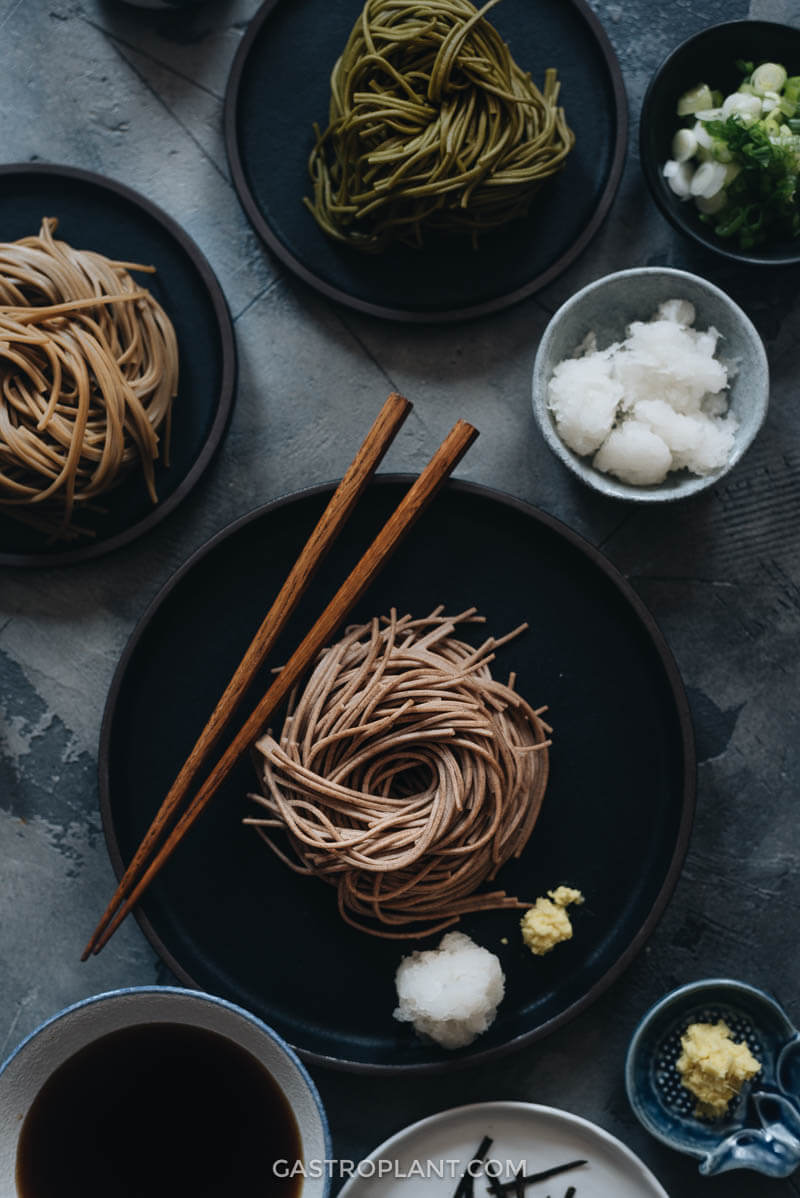 The tsuyu (dipping sauce/broth) is the other main component of this dish. It’s made from dashi broth, soy sauce, and mirin. The most common type of dashi is made of kombu seaweed and fish flakes (katsuobushi), but to veganize it, I used dried shiitake mushrooms for umami, dried nori seaweed for a taste of the sea, a bit of liquid smoke for a hint of smokiness, and maple syrup for malty sweetness.

I also included sake because I like the way it extracts flavor from the dried ingredients.

It seems like a lot of different ingredients, but if you frequently make plant-based broths, these are all great things to keep on hand because of the big flavors they impart.

To make the tsuyu, you basically simmer all these ingredients together for 10-30 minutes. More time means more flavor extracted, but 10 minutes gives you a plenty flavorful broth. That broth will be very concentrated, so I recommend diluting it with 1/2 cup or more of water. You can use ice water if you want the broth to be nice and cool. Or you can just dilute it and put it in the fridge for a bit.

The Other Ingredients in Vegan Zaru Soba

I included a few other ingredients to add other flavor notes and make the dish more refreshing.

Wasabi is commonly used in zaru soba, but I opted instead for grated daikon radish. Raw daikon has a similar bite to wasabi, but it’s much more subtle. The texture of grated daikon is watery and helps tie the tsuyu to the noodles as they’re dipped. It’s important to squeeze any excess liquid from the grated radish so it doesn’t dilute your tsuyu too much.

Fresh grated ginger adds a bright and refreshing aroma to the broth. It’s not enough to be spicy.

Green onion is another fresh but not overwhelming dimension of flavor and it also does a bit to help the broth cling to the noodles.

Shredded nori seaweed adds a bit of umami to the noodles. Also, the way that nori physically clings to the palate is somehow pleasing. 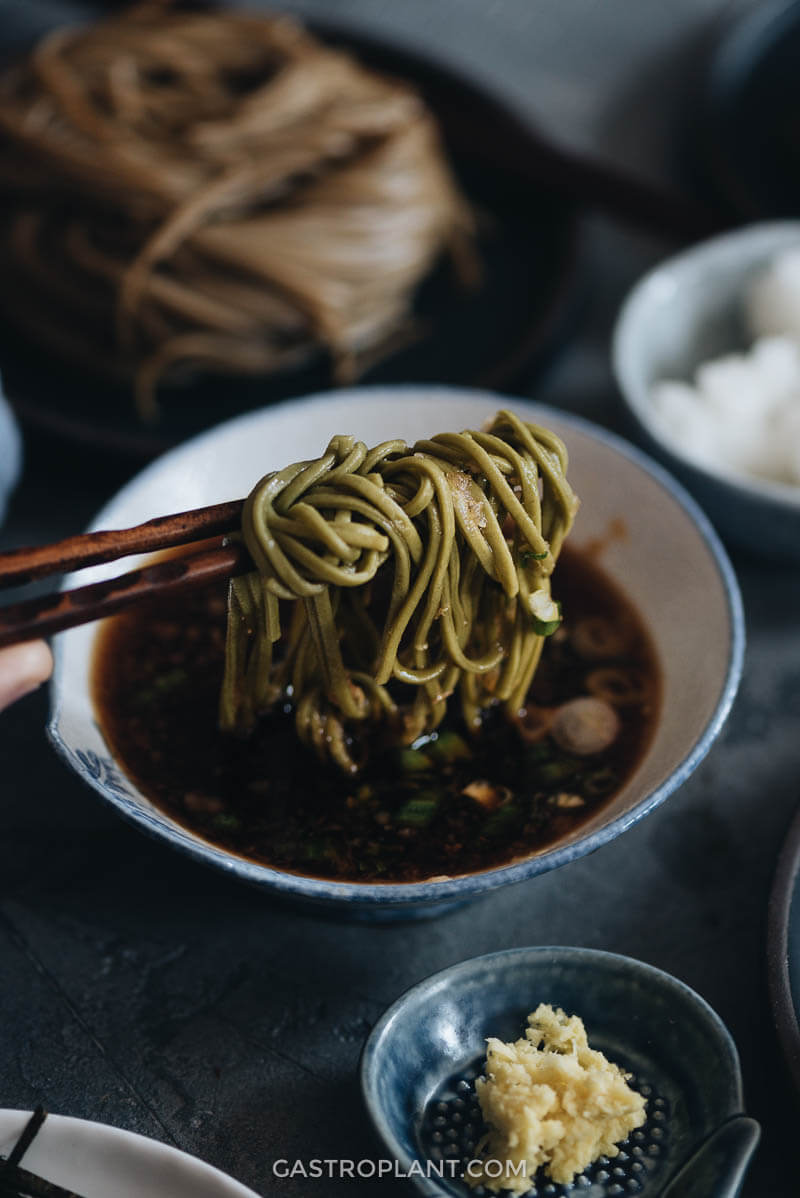 What to Pair with the Vegan Zaru Soba 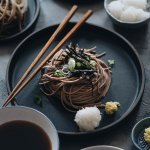 Simmer the tsuyu base

Strain and dilute the tsuyu

The 15-minute cooking time assumes you can cook the noodles and soup simultaneously. This is easier for 2 people but also possible for 1 person. The general strategy is to start boiling the water for the noodles at the same time you start simmering the sake and mirin. After you've added everything for the tsuyu and left it to simmer on its own, you can focus on cooking the soba and getting the texture just right. If you're not making this for 4 people, you can cook only the soba noodles you need and make a full batch of broth. The broth can be saved and used for zaru soba later, or even used as a hot soup. I tried using both shiitake and a combination of shiitake and assorted dried mushrooms (mostly white, brown, portobello). The shiitake mushrooms produce a nice strong flavor, while the assorted ones make the flavor a bit rounder and more balanced. You can substitute 1/2 cup of assorted mushrooms for each shiitake. My favorite combination was 2 shiitake plus 1/2 cup assorted. It’s important that you squeeze as much liquid out of the daikon radish as possible so that it adds a nice texture and doesn’t dilute the tsuyu too much. The broth (diluted or not) will stay good in the fridge for a week. The noodles will stay good for 2-3 days if they’re in a sealed container, but they tend to have the best texture when cooked fresh.