This Vegan Miso Ramen has a rich umami flavor and a hint of spiciness. It includes meaty king oyster mushroom “scallops”, corn kernels, marinated bamboo shoots, and bean sprouts. This one takes a little bit of time but the techniques are easy and the result is really rewarding. 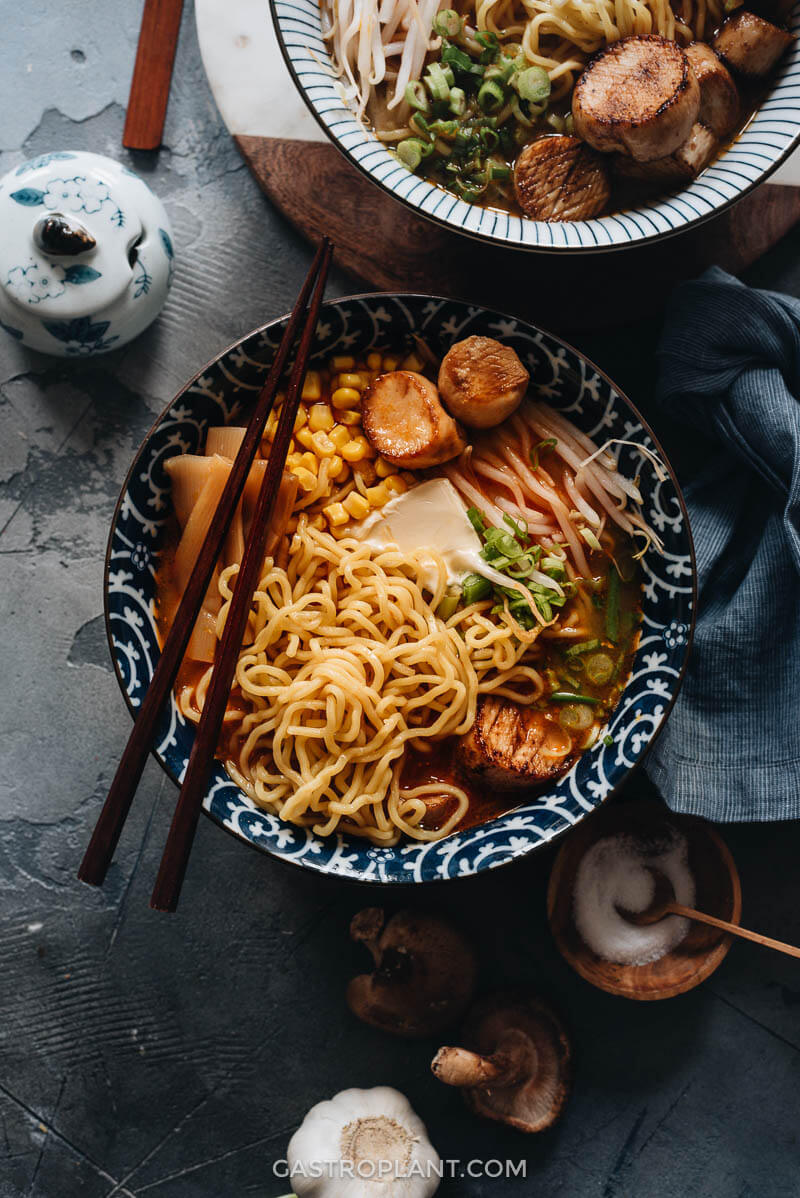 The Origin of This Vegan Miso Ramen

Following my first ramen recipe, for Tonkotsu Ramen and Broth, I wanted to share something equally satisfying but different. The tonkotsu broth was all about rich nutty creaminess, which is great for the cooler months, but a bit heavy for summer. Miso is an ingredient I always have on hand, due to its massive usefulness in plant-based cooking, so it was a natural next step to make miso-based ramen next.

Like my tonkotsu recipe, this miso ramen recipe is based on the ramen in a particular region of Japan. In the city of Sapporo, the ramen typically has a miso base and is served with corn, bean sprouts, marinated bamboo shoots (menma), pork, and egg. Look at this Google image search for Sapporo style ramen and you’ll see a consistent pattern. Sapporo ramen can be spicy but doesn’t have to be. The same goes for the Vegan Miso Ramen. 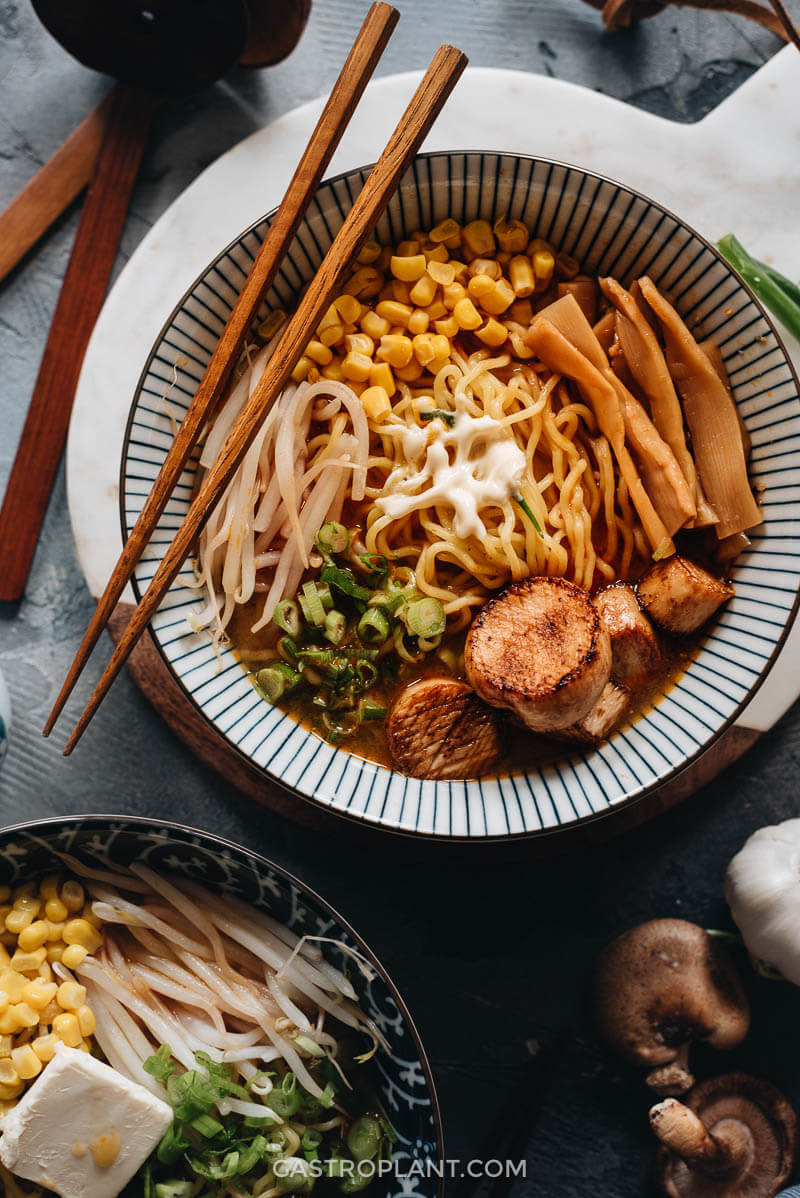 The pork lends a few different things to the broth – richness due to fat content, umami flavor, and the “toothfeel” of the meat itself – and I approached this from all those angles.

To get richness, I used a generous amount of peanut oil to saute the aromatics for the broth. Some of this oil gets emulsified in the broth, making it nice and rich. I recommend Lion & Globe brand peanut oil because of the high quality and great fragrance. If you don’t have peanut oil, you can use toasted sesame oil instead and the fragrance and richness will be just as good. Just be careful not to burn the oil, as its smoke point is lower.

For umami, I included minced fresh shiitake mushrooms and nutritional yeast. They both contribute to a fuller and rounder flavor in the broth. The mushrooms provide a bit of bite, too, as sort of a ground meat substitute here.

Instead of big slices of roasted pork, I included big slices of king oyster mushrooms, cooked to look like scallops. I’ll talk more about the “scallops” below, but these mushrooms have a pleasant meaty feel under the tooth and make a great replacement for sliced meat. 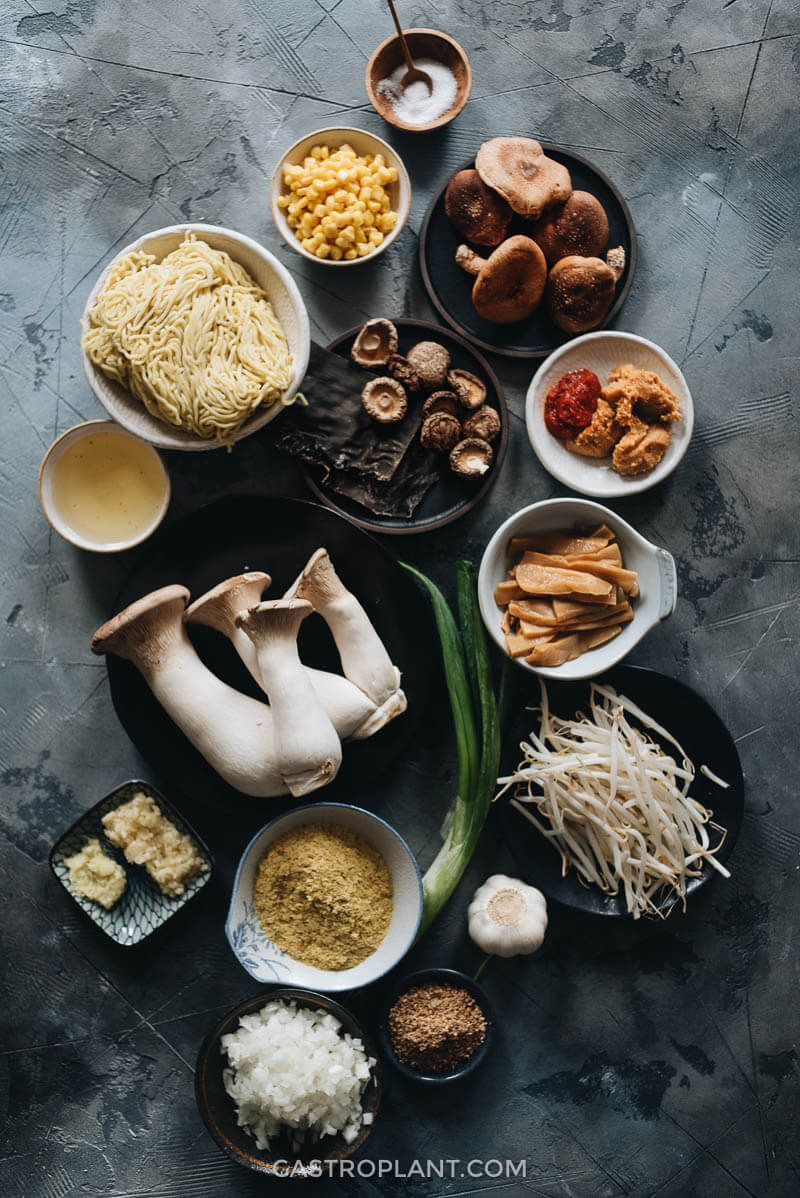 I know that scallops aren’t a typical ingredient in the traditional version of Sapporo ramen, but I had to improvise. Hokkaido, the island where Sapporo is located, is famous for its seafood, and seafood occasionally appears in ramen there, so I didn’t think it was too much of a stretch.

I borrowed the method to make these “scallops” from a Wicked Healthy video. If you’re not familiar with Wicked Healthy and the two great chefs behind it, definitely check them out. They do some really creative and brilliant things with mushrooms and other vegetables.

To make the “scallops” you basically cut king oyster mushrooms to look like scallops (more or less), boil them in a savory broth until tender, sear them in a hot cast iron skillet, then saute them briefly in a mixture of soy sauce and plant-based butter. 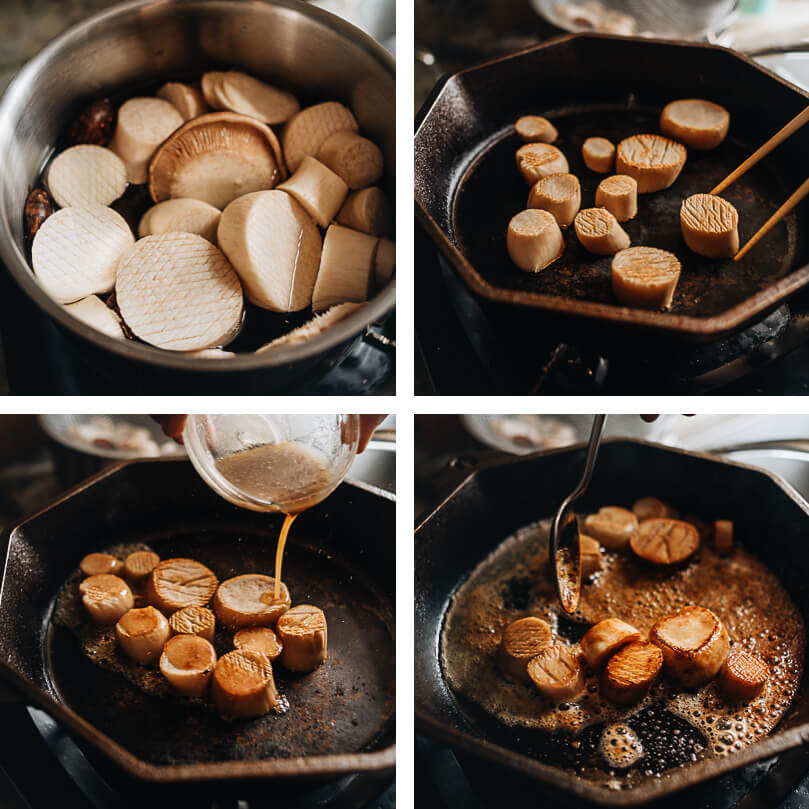 What it’s Like to Cook the Vegan Miso Ramen

The cooking process for this dish is on the intensive side – most of the cooking time is active because there are a few different components to prepare. But if you have help (and more than one stove burner) you can do some of the tasks at the same time and have this ready in well under an hour.

To make the broth, you start by sauteing the aromatics – garlic, ginger, onion, and fresh shiitake mushrooms – in peanut (or sesame) oil. Then add ground sesame seeds, miso, and doubanjiang (a spicy fermented bean paste, more about this below) and saute these for a minute. Then add vegetable broth, sake, and a touch of sweetener (I use maple syrup, even though it’s not traditional). To further enhance the broth, I added a piece of kombu seaweed and some dried shiitake mushrooms.

Once you’ve cut the mushrooms and put the slick cross-score pattern on them, we simmer them in water with a piece of kombu and some shiitake mushrooms. This does three things – cooks the “scallops”, imparts them with the subtle flavors of the kombu and shiitake, and creates a useful and versatile dashi broth that you can use in any savory dish. I’m serious – save the boiling broth from the mushrooms.

After the “scallops” are tender, we heat them without oil in a cast iron skillet to get some beautiful caramelization on both of the scored sides. This caramelization also tastes really good. When the mushrooms are pretty much finished, we add the plant butter and soy sauce mixture onto them and stir in the hot skillet to brown the butter and caramelize the soy sauce. You’ll need to remove them shortly after this because soy sauce burns easily.

Preparing the Noodles and Other Toppings

The rest of the ingredients are pretty straightforward. The noodles need boiling and you can use the same boiling water for the bean sprouts, which just need a minute or so. As for the rest – the corn, menma, plant-based butter, and green onion – you can just add them onto the bowls when you’re ready to serve. These don’t need any heating. 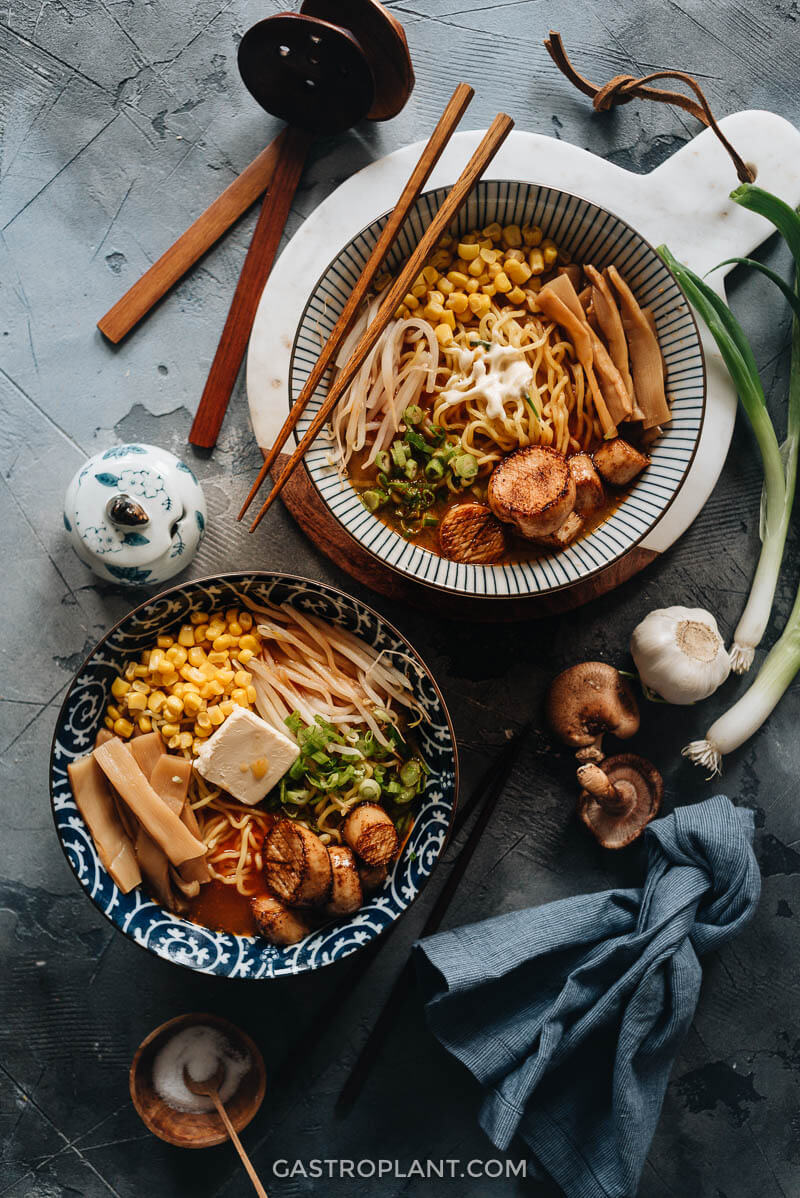 A Few Words About the Ingredients in Vegan Miso Ramen

There may be quite a few unusual ingredients in the recipe, so I wanted to provide a guide so you know what to expect. You should be able to get all of these at a Japanese grocery store. You’ll probably also be able to get them at a Chinese or Korean grocery store. But here’s a brief intro to the less common ones.

Miso – it’s common enough, but there are so many different kinds. For this dish I recommend either yellow (awase) or red (aka) miso, preferably from Japan. I have used US-made miso, and the quality is very high, but it’s milder than the Japanese ones so you’ll need to use more of it. This is the brand I used when developing this recipe. Do make sure that the miso doesn’t contain any fish ingredients (it’s not uncommon that they do).

Doubanjiang – a Chinese ingredient also used in Japanese cuisine, it’s a spicy fermented bean paste. You can skip this and replace it with more miso if you don’t want your ramen to be spicy. I used Youki brand doubanjiang in this recipe.

Kombu and dried shiitake mushrooms are the core of a plant-based Japanese broth (dashi) are important for big flavor. I recommend keeping some of both on hand for any time you want to enhance a soup or broth. Since they’re dried they’ll keep for a long time in an airtight bag or container.

I know that “ramen” refers to the fried, dried instant noodles for a lot of people. Don’t use instant noodles if you can help it. Fresh or frozen Japanese style ramen noodles are so much better in terms of texture and they don’t cost much more than instant. Look for them in the refrigerated or frozen section of your Asian grocery store. If you can get fresh noodles from Sun Noodle, definitely do it.

Corn and plant-based butter – these may not sound very Japanese, but the island of Hokkaido is known for both corn and dairy farming. So these toppings are representative of the local region. They also complement the other flavors really nicely.

Menma – these pickled bamboo shoots are addictively tasty. You can buy them pre-made in a jar or plastic package and put as much of them as you want onto your ramen bowl. If you can’t buy menma, you can make your own or use other preserved bamboo shoots, such as these chili ones from Taiwan. 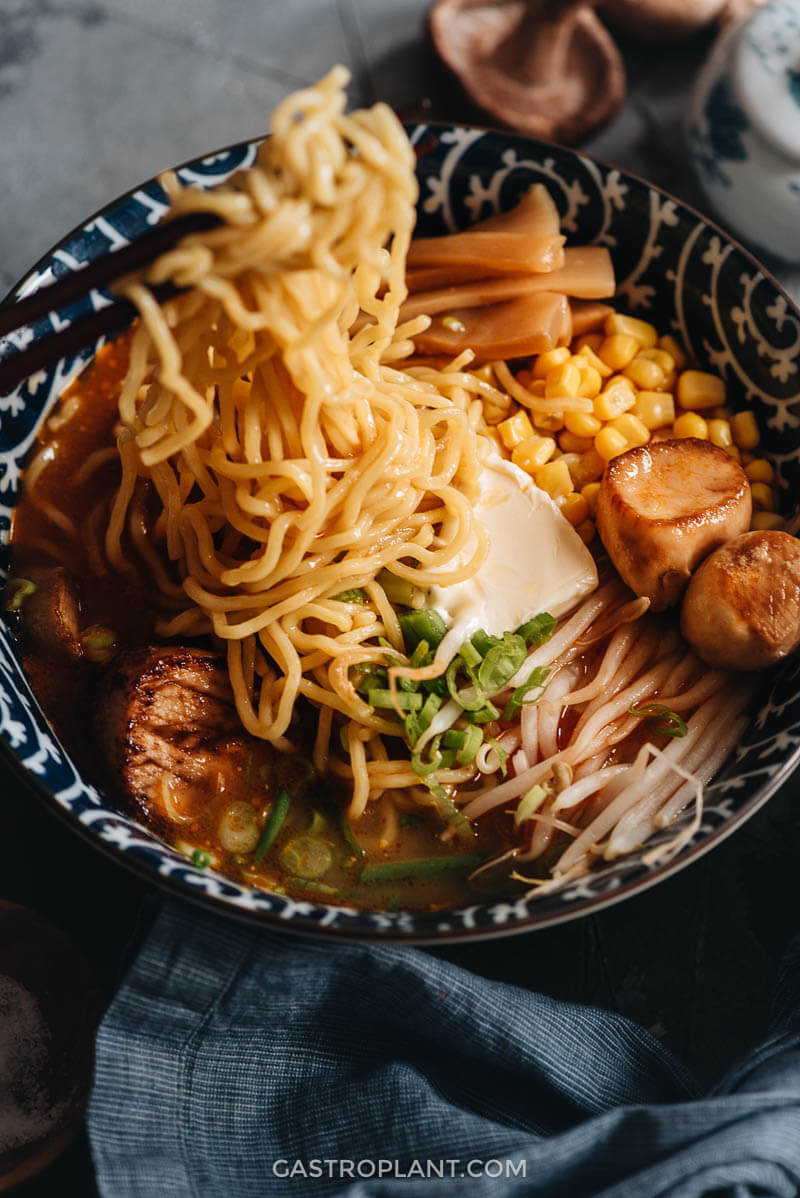 What About The Easy Version?

I developed this recipe to recreate the enjoyment of a restaurant ramen experience. The noodles and mushrooms get cooked separately so they can be as close to perfect as possible. And there are a lot of less common ingredients in the recipe. I admit it’s not the quickest or easiest recipe and feel like I should offer an easy version.

I’m pretty sure it’s possible to make a version of this dish that can be ready in 15-20 minutes and only use one pot. It wouldn’t be as fancy or as nuanced but it would be tasty. Is that something you’d be interested in? Let me know in the comments! 🙂 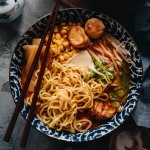 It has a rich umami flavor and a hint of spiciness. It includes meaty king oyster mushroom “scallops”, corn kernels, marinated bamboo shoots, and bean sprouts. This one takes a little bit of time but the techniques are easy and the result is really rewarding.
Prep Time5 mins
Cook Time1 hr
Course: Dinner
Cuisine: Japanese
Servings: 2 bowls
Author: Thomas

Boil the noodles and bean sprouts

This recipe makes 4 small bowls or 2 meal-sized bowls of noodles.
Dried shiitake mushrooms come in different sizes. The ones I used were about 1 inch (2.5 centimeters) in diameter and I used 4 of them in the ramen broth and 4 in the simmering liquid for the “scallops”. If your dried mushrooms are larger than this, you can use 2 or 3 of them in each of those cases.
The doubanjiang will make the soup slightly spicy. If you prefer a non-spicy broth, you can replace the doubanjiang with the same amount of miso.
If you do want your ramen spicy, especially spicy, you can garnish with Japanese chili oil (la yu).
The photos in the blog post show bowls with not much broth in them. Feel free to add much more broth than shown here.
If you don’t finish the ramen, separate the noodles and other ingredients from the broth and store them in separate airtight containers in the fridge. This will help prevent the noodles from getting too soggy.