BBQ King Oyster Mushrooms are ripped to shreds, roasted until tender and crispy around the edges, and finished in a tangy, spicy homemade sauce. Put them in a sandwich, taco, or Buddha bowl or serve them as part of your BBQ party spread. 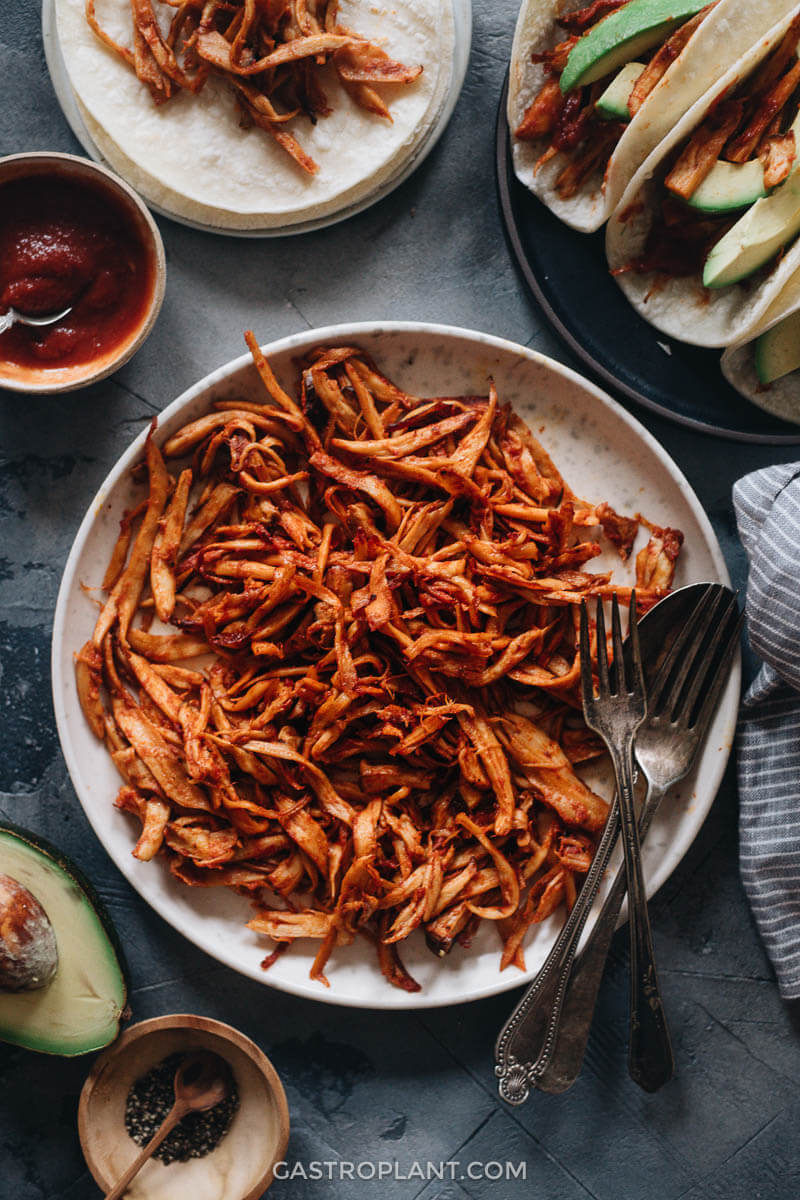 I’ve been experimenting with king oyster mushrooms quite a bit since starting Gastroplant. I’ve shared some of my favorite ways to cook them in various ramen recipes.

I wanted to create a king oyster mushroom recipe that could stand on its own, that I could make for any occasion. Not having any sort of BBQ recipes yet, it seemed like a good combo. 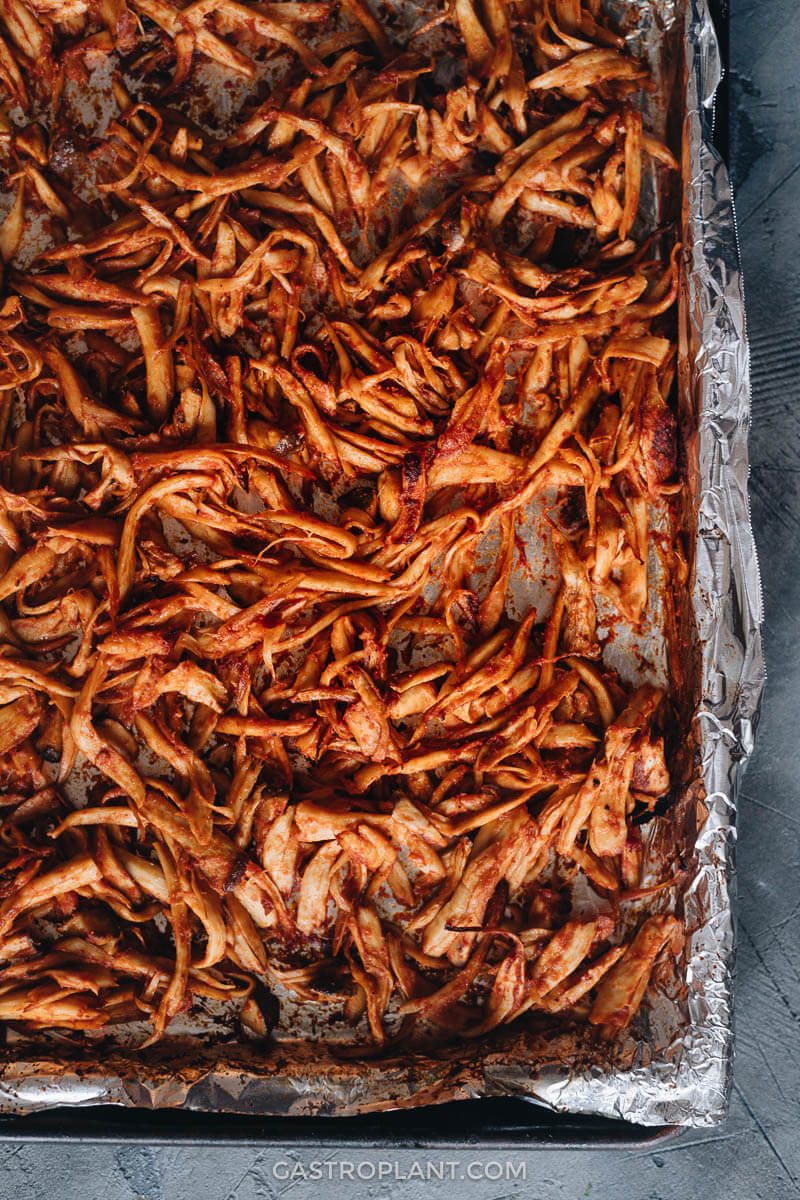 What are king oyster mushrooms?

If you’re unfamiliar, king oyster mushrooms (aka eryngii mushrooms) have a thick, meaty, edible stem and a small-but-tender cap.

They’re becoming more widespread in regular grocery stores in the US, but they’re still a bit of a niche product. I seem to find the best (and cheapest) ones at Chinese and Korean grocery stores.

King oysters have a really mild flavor, so they taste like whatever you cook them in. I like them for their texture which can be made really close to that of shredded meat or even seafood.

Smaller mushrooms will be more tender, but harder to make into impressive-looking shredded “meat” or “scallops”. 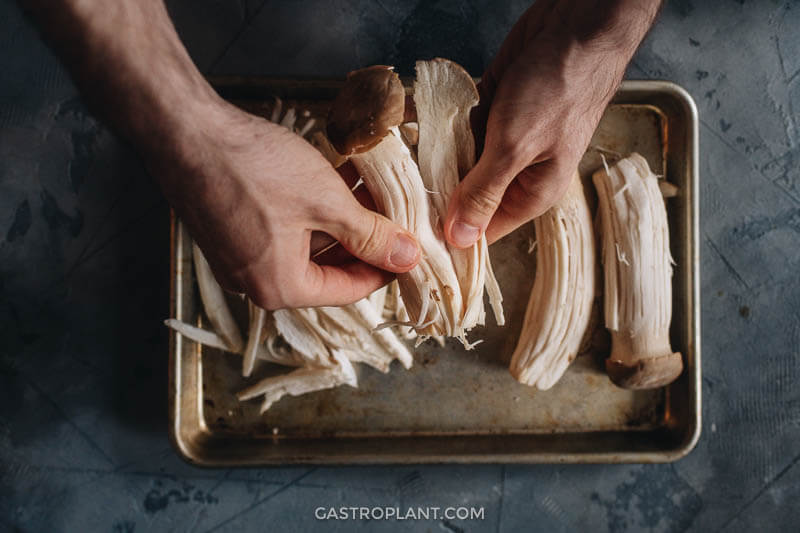 How to make the BBQ King Oyster Mushrooms

To prep the mushrooms, wash and dry them and then carefully use a fork to score deep grooves along the length of the stem on all sides. The grooves will make it easier to pull the mushroom apart by hand. Pull them by hand until they’re mostly thin strips.

You’ll toss the mushrooms in oil, season with salt and pepper, and then bake them for a bit. You can mix the sauce while they’re baking.

The mushrooms will start to get a little crispy at this point. But you’ll slather them with sauce and roast them until crispy again. You can do this a couple of times to build up a concentrated sauce on the mushrooms and create a great texture. 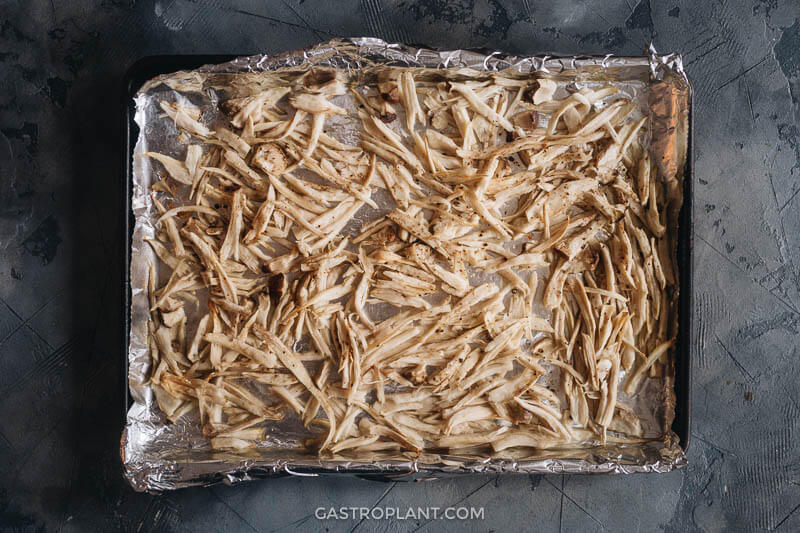 Roasted mushrooms ready to be sauced

Why the recipe works

Shredded king oyster mushrooms are meaty, yes, but I think the texture is somehow better than that of meat. They have a springiness that’s really satisfying.

And the crispy edges add a contrast to the springy meaty parts. The sauce caramelizes and crisps as well, giving them a sort of crispy-sticky feel.

I like to get away from bottled sauces whenever I can. It’s healthier and I like to know what’s in my food.

I made this sauce based on a classic Kansas-City-style sauce. It’s tomato-based with pops of garlic, cumin, cayenne, and liquid smoke. It’s less sweet than most bottled BBQ sauces.

You can tweak the sauce if you want a spicer or sweeter version (see tips in the recipe) or even use bottled sauce if you’re in a pinch.

You can serve these mushrooms in so many different ways – sandwiches, tacos, salads, and Buddha bowls are all great ideas.

You can also easily build a plant-based dinner spread around them. The flavor profile goes great with Southern (US) and Tex Mex cuisine and it generally fits with other comfort food. 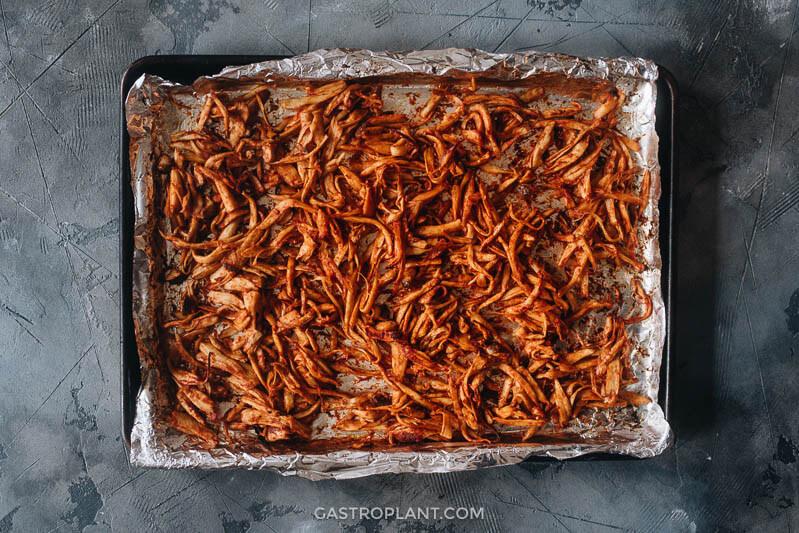 Since my wife and I lived in Texas most recently, BBQ tacos felt totally natural. We used corn tortillas (use flour if you prefer) and avocado slices and it was a really solid combo.

You could make the tacos even fancier by adding some black beans, tomato, onion, and cilantro. If you want to go all-out, maybe drizzle some vegan queso on there. 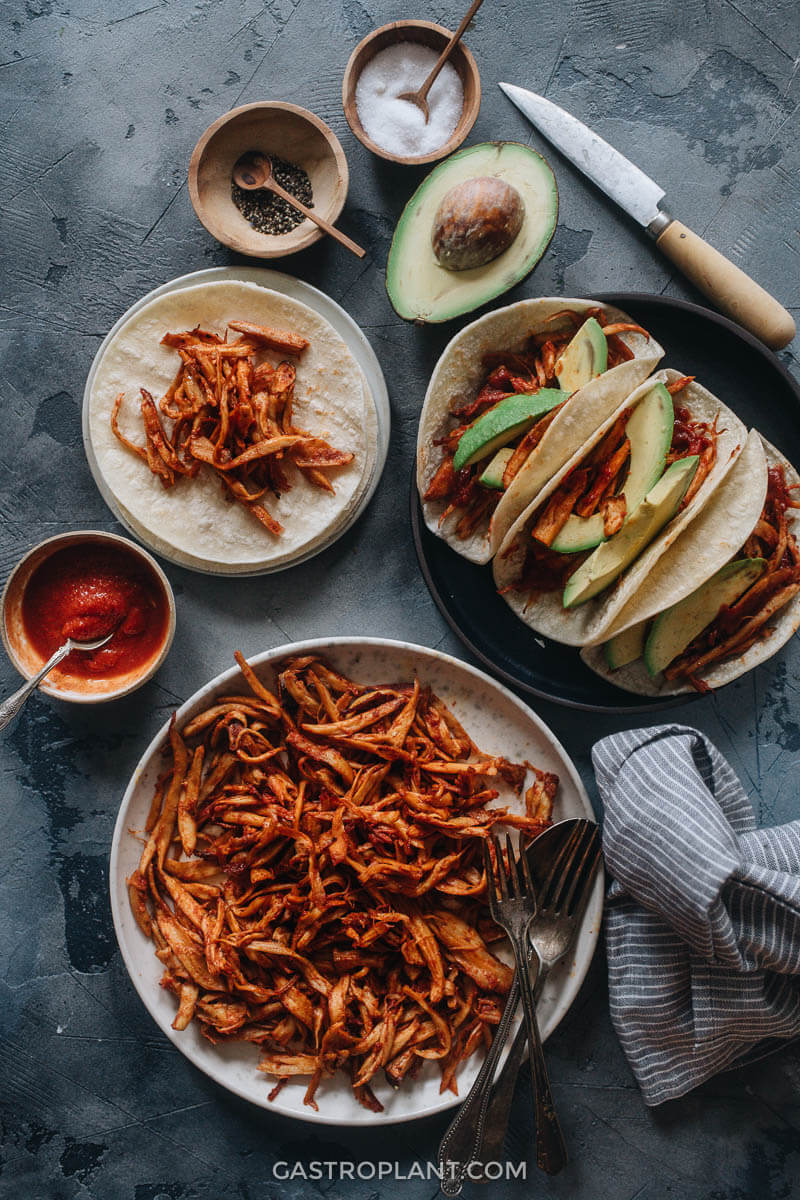 This one comes naturally to me, having grown up in the South. Pair the mushrooms with a couple of plant-based comfort dishes, such as mac & cheese (maybe simplify it by skipping the baking).

Balance the meal out by adding coleslaw (there’s a super simple one in my Vegan Poke recipe) and some cooked greens. Take my sauteed kale recipe and swap the kale for collards. 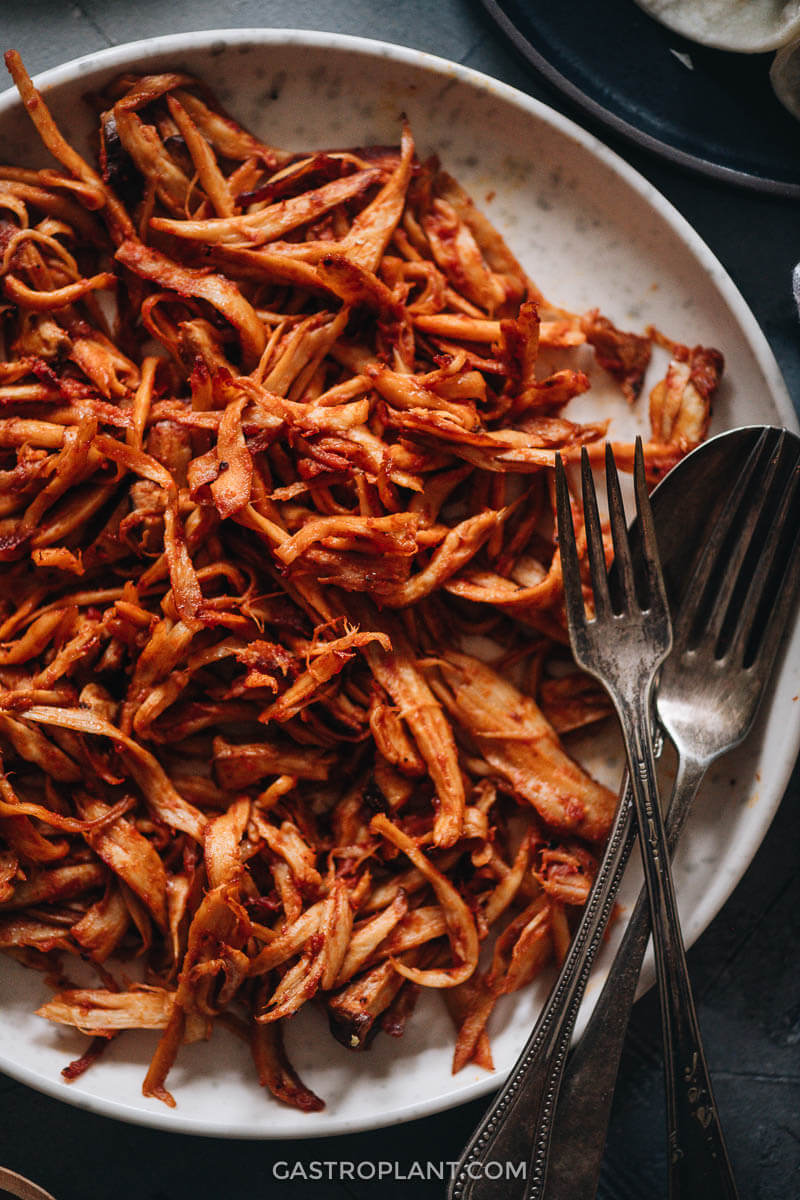 Because of the firm, meaty texture of king oysters, there are a number of ways you can make a tasty plant-based alternative

Comfort Food to Pair with the BBQ Mushrooms 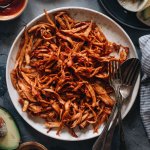 BBQ King Oyster Mushrooms are ripped to shreds, roasted until tender and crispy around the edges, and finished in a tangy, spicy homemade sauce. Put them in a sandwich, taco, or Buddha bowl or serve them as part of your BBQ party spread.
Prep Time10 mins
Cook Time30 mins
Course: Condiment, Dinner
Cuisine: American
Servings: 4
Author: Thomas 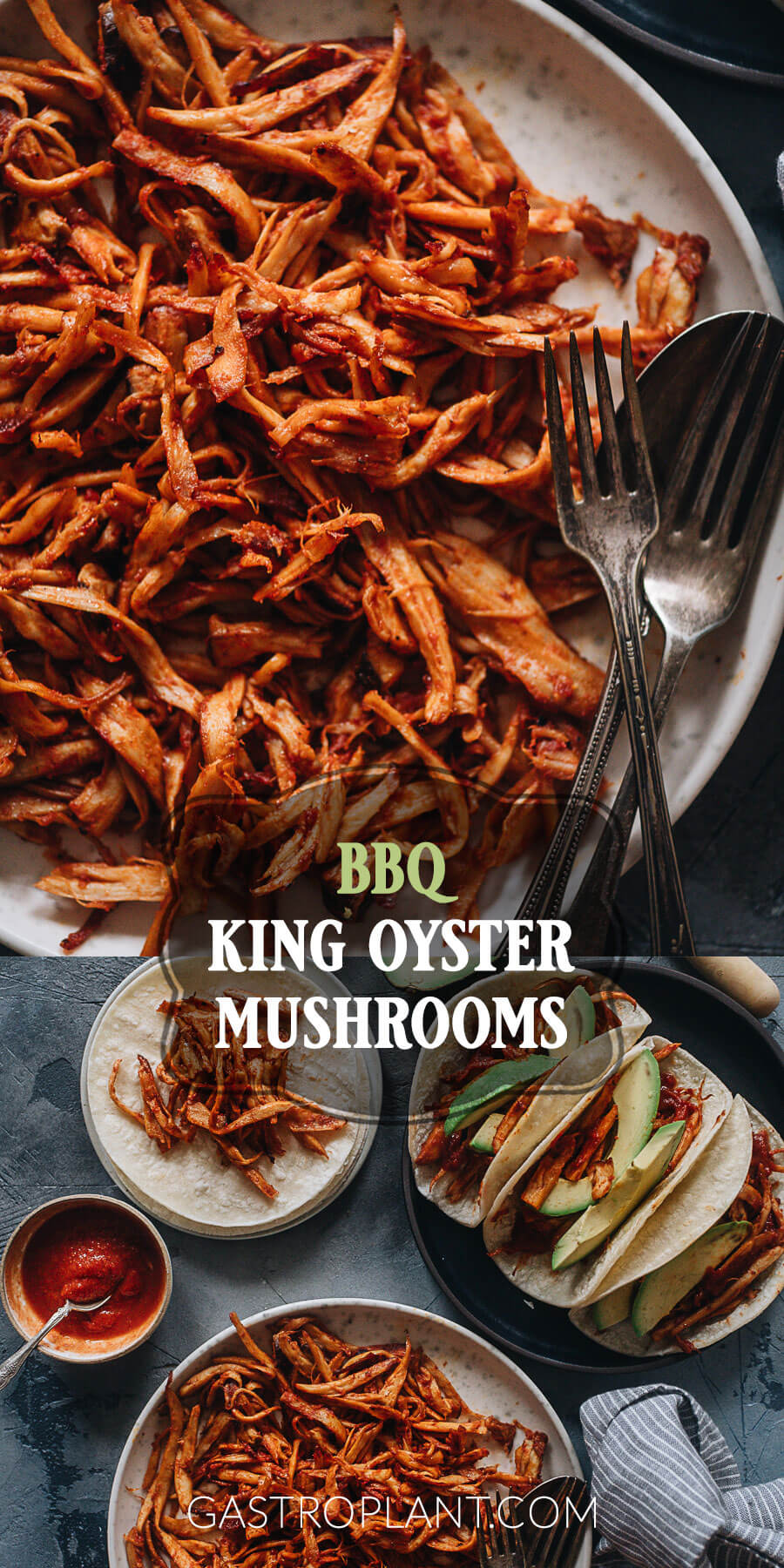