This vegan Japanese potato salad has creamy mashed potato, corn, carrot, and celery and is topped with tangy and umami okonomi sauce. It’s an addictive appetizer or side dish that is really easy to make. 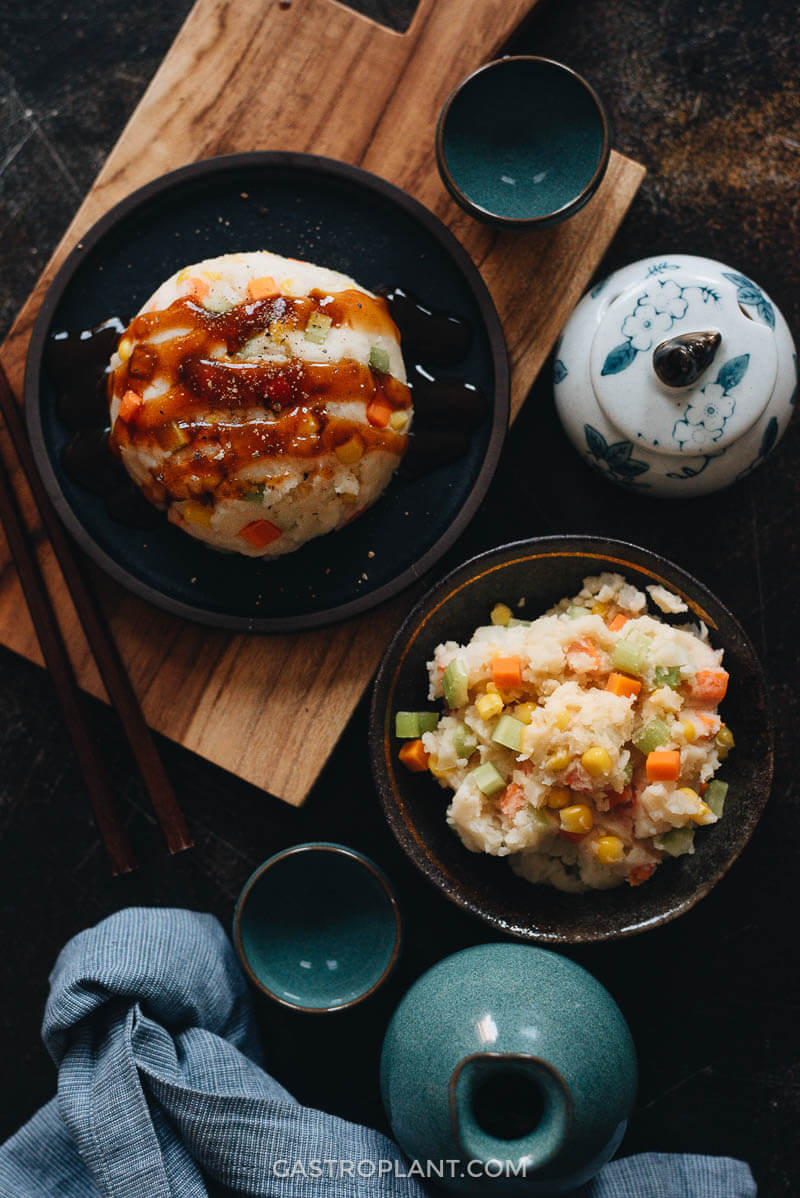 Like a lot of my recipes, this one was inspired by a dish I tried at a local restaurant. Ramen Ishida is a tiny shop in Manhattan that makes some of the best ramen I’ve ever had and their vegan options are outstanding. I decided to try an appetizer with my ramen and went with this potato salad.

This potato salad was like others I’d tried, but what makes it different from Western versions are the corn (this is standard in Japanese potato salad) and the okonomi sauce (this seems pretty unique to Ishida).

I really liked the contrasts in this dish – creamy potato against the different crunches of the corn, carrot, and celery. There’s also the contrast between the potato and the okonomi sauce, which is sweet, sour, salty, and smoky. So, I decided to recreate it at home and share it with you. 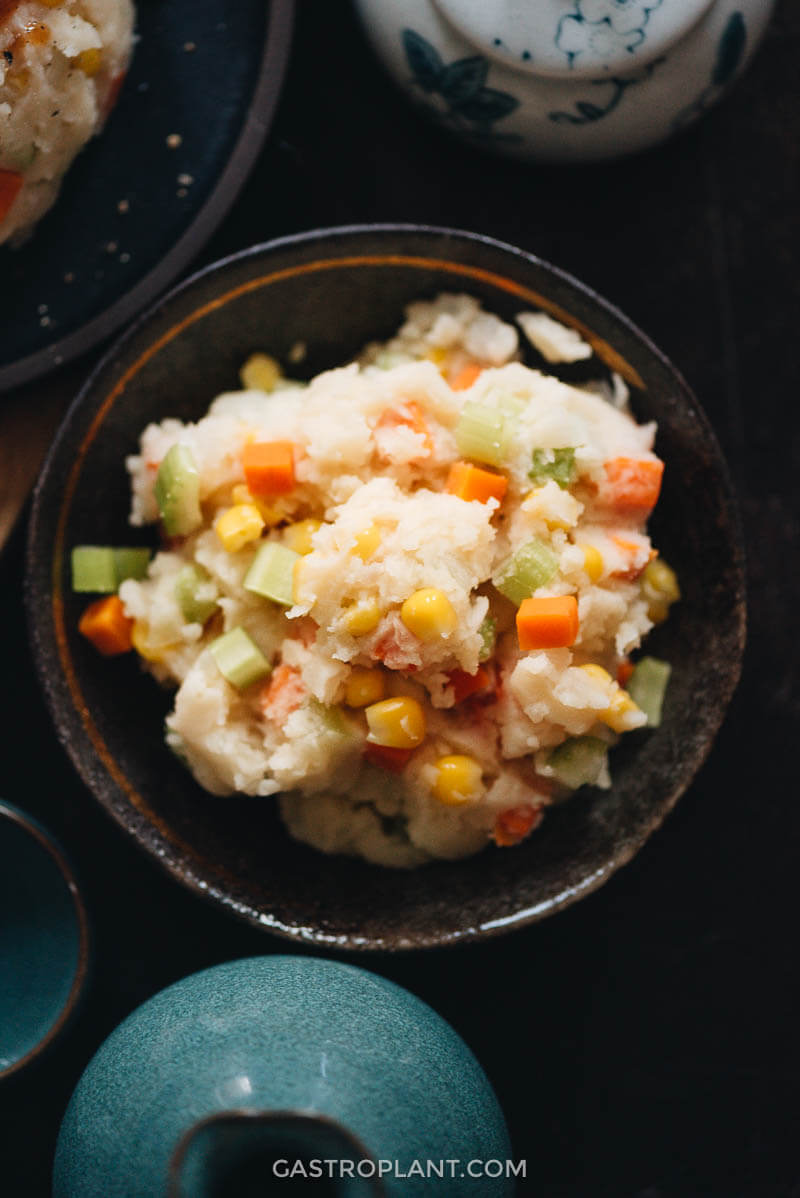 What is okonomi Sauce?

Okonomi sauce is a Japanese condiment made from tomato, date, onion, apple, peach, carrot, orange, garlic, soy sauce, and sugar. The flavor is really similar to that of Worcestershire sauce, incidentally, but it’s much less concentrated so you can slather it on food like you might with ketchup.

It’s a good sauce to use in place of ketchup or barbecue sauce, since it has things in common with both. I haven’t tried it in a dish in place of Worcestershire in a marinade or cooked dish, but I imagine it would work that way, too.

In the spirit of full disclosure, while okonomi sauce is delicious, most brands of it contain high-fructose corn syrup. If you know of a brand that doesn’t contain it, please let me know! 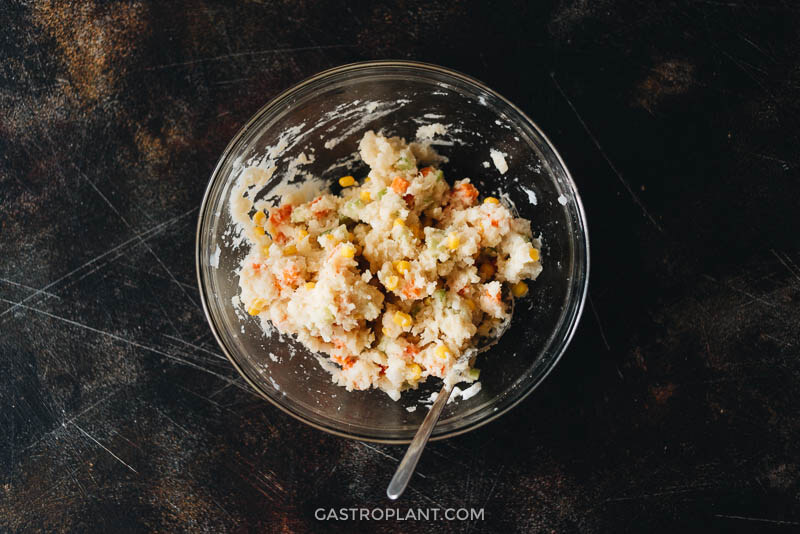 How to make the Vegan Japanese Potato Salad

There are three main steps to the recipe:

A Few Notes Before You Start

The potato salad is plenty tasty without the okonomi sauce. Feel free to skip it.

You can eat the salad hot, let it cool to room temperature, or chill it. It’s tasty all three ways. 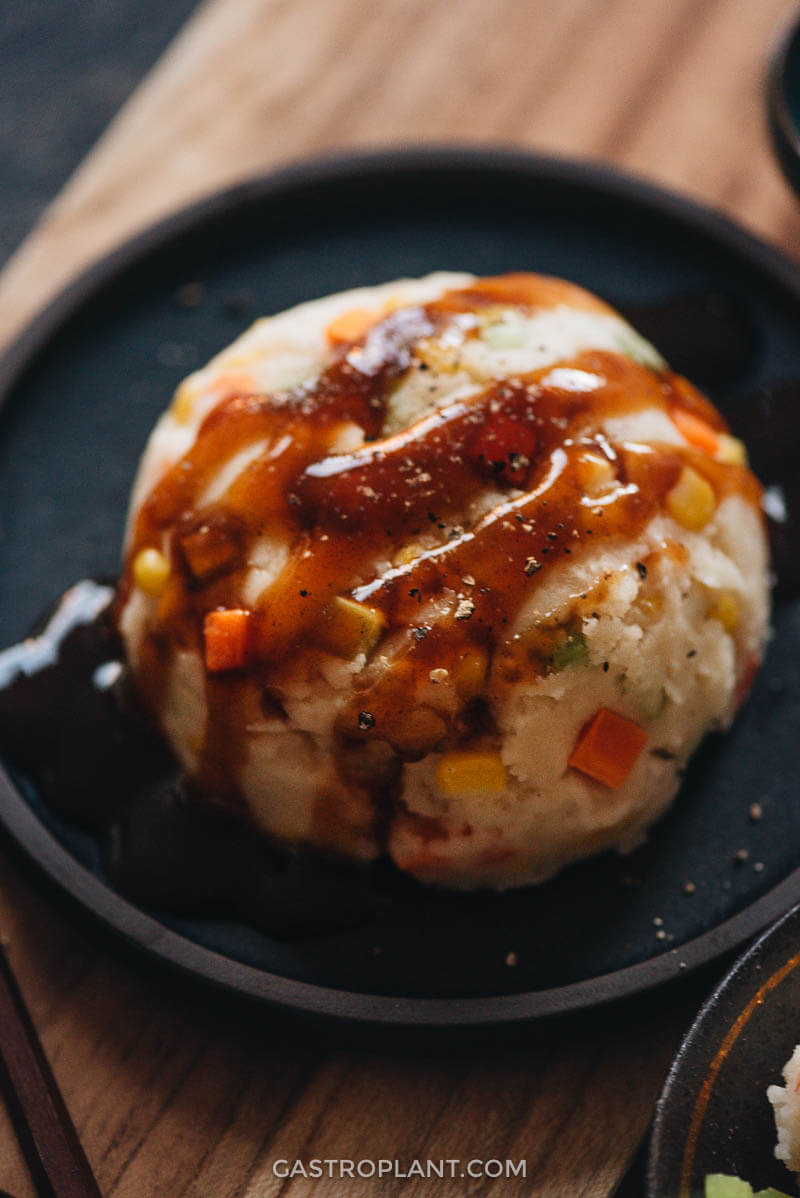 Make it a Meal with Some Plant-Based Ramen 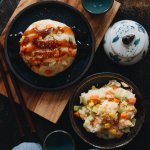 You can skip the drying process (in the nonstick skillet) for the potato and carrot, but the dish may be slightly more runny.
It is possible to blanch the carrots at the same time that you are drying the potatoes in the skillet. If you’re comfortable with this simultaneous action, it can speed up your cooking process.