This Vegan Cauliflower Soup is thick and creamy and highlights the nutty and grassy notes of the cauliflower. It’s accented with a tangy paprika drizzle and toasted pine nuts. 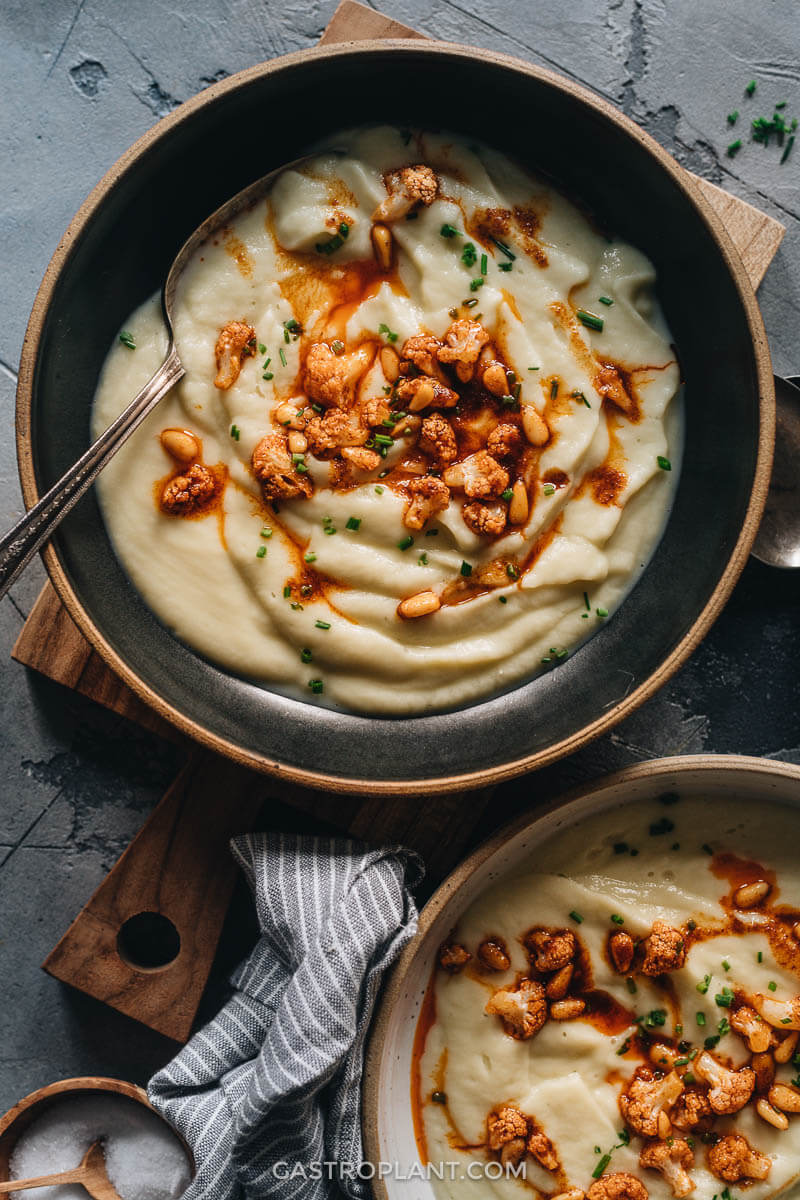 How this Vegan Cauliflower Soup Happened

My lovely wife was craving cauliflower soup on a chilly December evening. I wanted to make a soup that helped the natural essence of the cauliflower shine. Great mouthfeel was important as well. But I also wanted some bright pops of flavor to keep it interesting.

I reached for a couple of trusty books – The Complete Vegetarian Cookbook (from America’s Test Kitchen) and The Flavor Bible for inspiration. The former I like for its solid and detailed recipes and the latter for creative brainstorming of flavor combinations.

I adapted the cauliflower soup recipe from the vegetarian cookbook and enhanced it with some flavor affinities suggested in the Flavor Bible.

What makes this soup tasty

There are a few different things going on with the flavors.

Because of the clever cooking method, which I learned from the cookbook and explain below, the cauliflower shows off two flavors by itself. You get both the creamy, nutty essence of cooked cauliflower and the grassy-floral vibes of raw (or less cooked) cauliflower.

The flavoring oil adds even more layers of flavor. The paprika gives a delightful sweetness, the vinegar a tartness, and the pine nuts a direct, almost smoky nuttiness.

The texture of the soup itself is creamy and smooth but not heavy. The mouthfeel is almost fluffy from the blending, though it’s still a substantial dish. This all creates a nice balance in the soup.

The toppings add a layer of textural contrast – toasted pine nuts have a nice “break” as you bite into them and the sauteed cauliflower florets provide a softer, more fibrous bite. 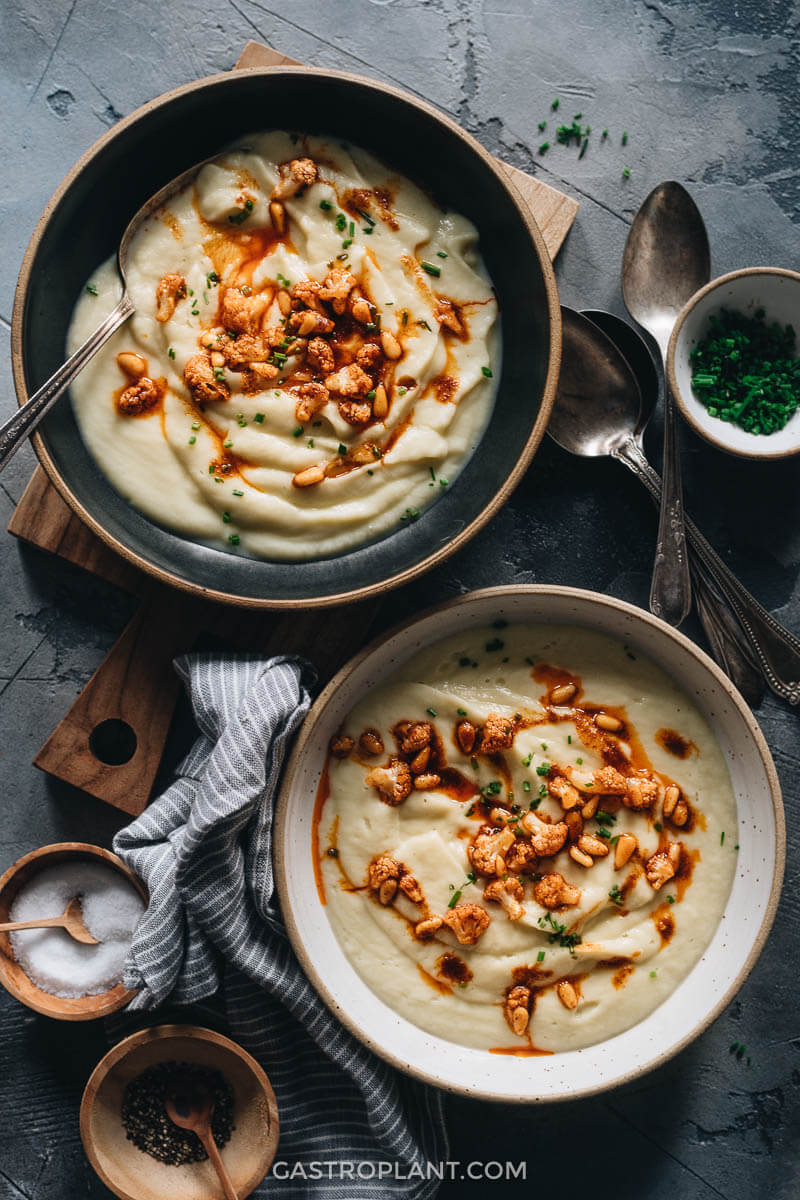 How to Make the Soup

It’s important to cut the cauliflower a certain way to get the best flavor. You’ll carefully remove the stem and core with a knife. The stem and core should be sliced thinly so they will cook through and become tender.

Break off about a cup of nice-looking small florets and set them aside. You’ll saute these and use them in the final garnish.

Slice the rest of the cauliflower into half-inch slices. Even thickness will help it cook evenly and the soup to have a nice texture.

You’ll saute onion and leek in plant-based butter until tender, then add some water, the cauliflower stem and core, and half of the sliced cauliflower (not the florets, and set the other half aside).

Once you’ve simmered the first half of the sliced cauliflower for 15 minutes, you’ll add the other half. The first half gets nutty, while the second half stays a little bit grassy. This step is done when the recently-added cauliflower is tender.

You’ll saute the cauliflower and pine nuts in the butter, then add the paprika to the pan to toast it lightly. Stir the vinegar in, and the drizzle is ready.

When you’re ready to serve, blend the cauliflower, leek, onion, and liquid together until smooth. Season it with salt and pepper to taste, adjust the consistency if you need, and pour it into bowls.

Garnish with a generous spoonful (or two) of the drizzle, sprinkle some chopped chives onto the soup, and enjoy! 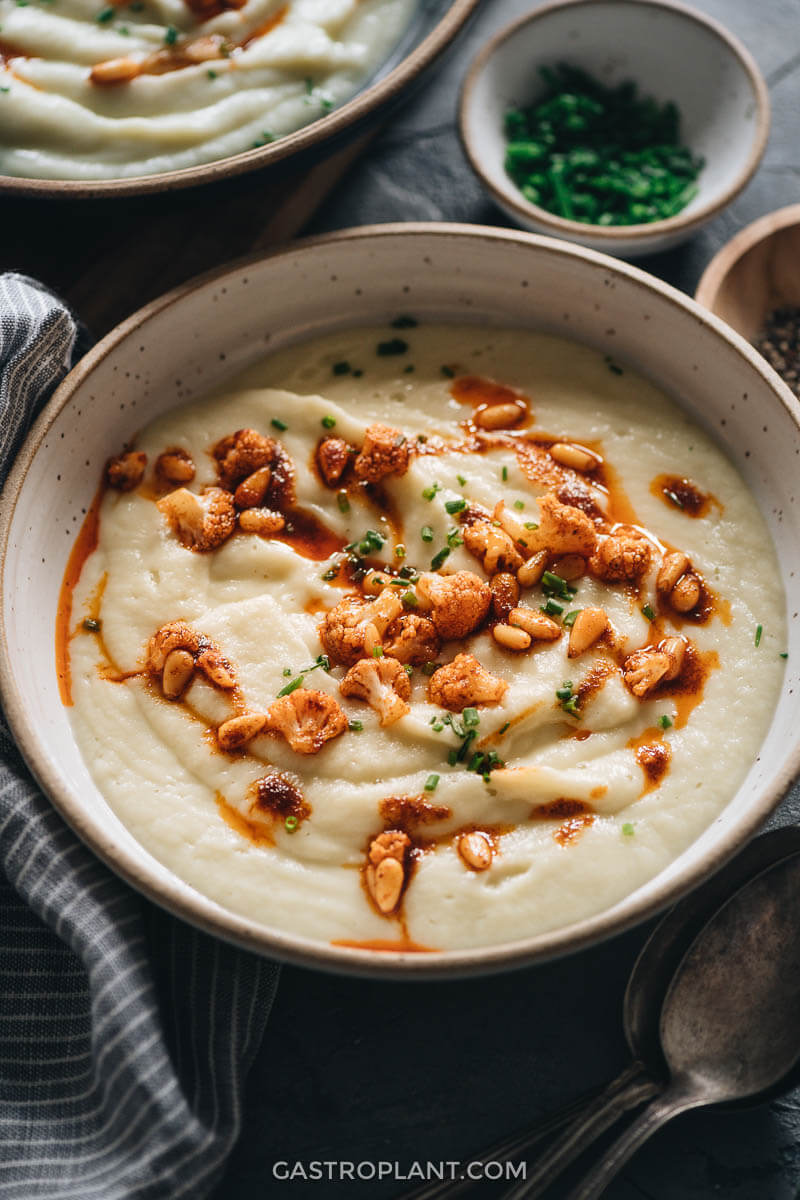 Easy Veggie Dishes to Pair with the Soup

You can use other types of vinegar, though sweeter ones with some color (apple cider, red wine, or balsamic) are preferable. You can save time if you prepare the drizzle while the cauliflower is simmering. Practically all plant-based butter contains salt, so be sure to taste the soup before adding salt, so you don't oversalt it. If you’d like to simplify the recipe, you can add all the cauliflower at once. The flavor of the soup will not be as complex in this case, though. 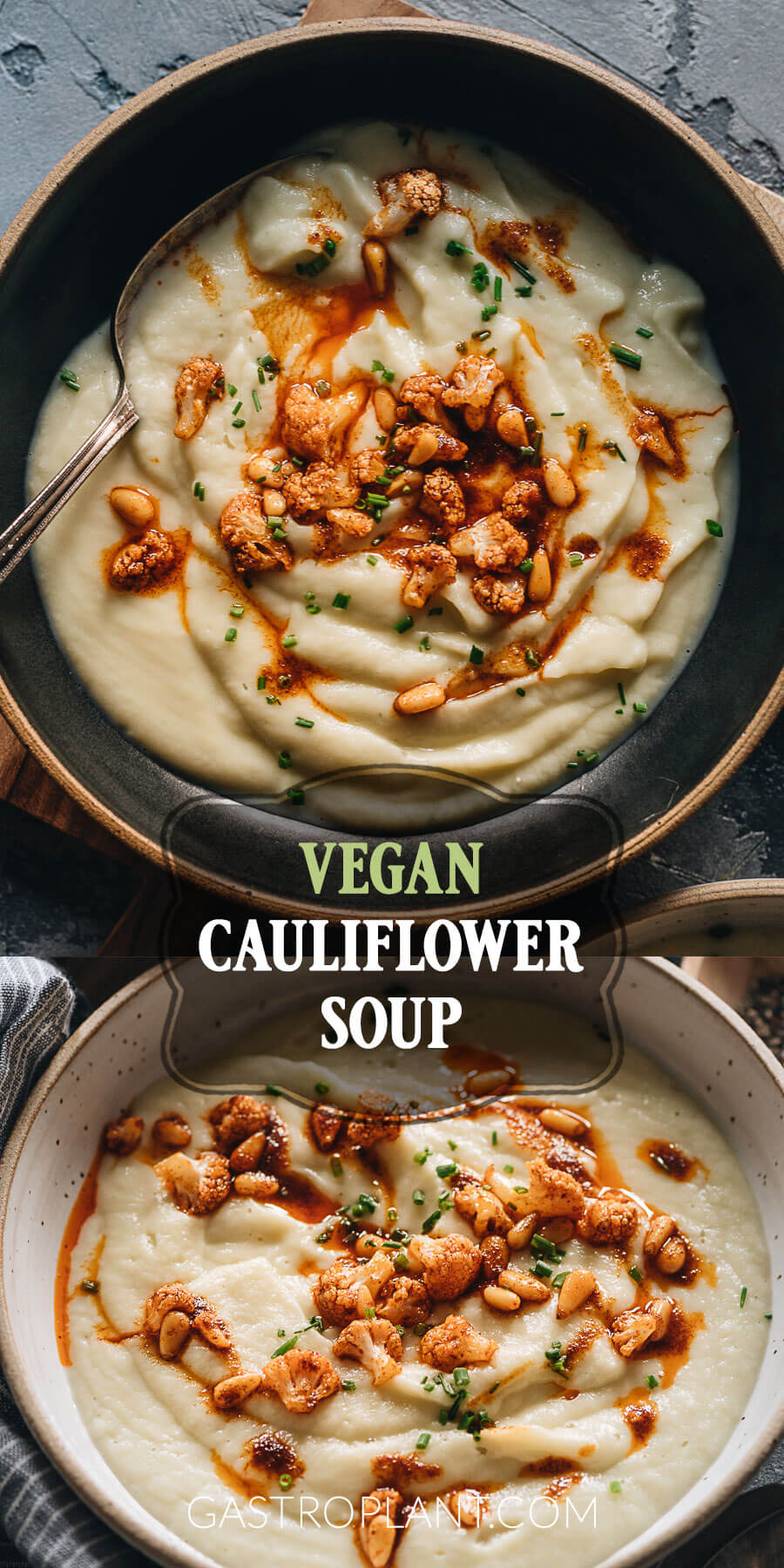