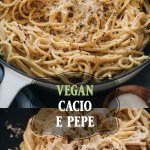 I’m continuously impressed by the simplicity of the classic Italian recipes. Pasta sauces like ragu alla bolognese and puttanesca are often made with 10 ingredients or less. The original Cacio e Pepe, an extreme example, can be made with two – cheese and black pepper.

I wanted to develop and share a vegan version that captured the same flavor profile:

While the recipe is slightly more complicated than the original (there is some blending involved), I was happy with how the dish came out. (And I got wholehearted endorsement from the omnivores I shared the pasta with.)

There are four main steps to making this and each one is pretty simple. Here goes:

Toast the Nuts and Sesame Seeds

This is optional if your nuts and seeds are already roasted, but it makes a big difference. Freshly toasted nuts just fill your mouth with flavor.

I like to roast the almonds and cashews at 350 F (175 C) for up to 10 minutes and the sesame seeds for 2-3 minutes. Do be careful not to toast either of them too dark.

Also note that you can even toast nuts that are already toasted and it will help develop their flavor a lot.

When boiling the pasta, take care not to oversalt the water, since you’ll use some of it in the sauce.

You’ll want to boil the pasta for 1-2 minutes less than the time recommended on the package, since you’ll be sauteing it in the sauce for a couple more minutes.

You can begin making the sauce while waiting for the water to boil.

Traditionally, the “sauce” in Cacio e Pepe is simply melted cheese mixed with pasta boiling water. To mimic the special flavor of pecorino romano, the cheese historically used in the dish I blend the toasted nuts and sesame seeds with white miso and sauerkraut brine.

I also mix in a bit of pasta boiling water so that the blender has enough liquid to get the sauce smooth.

In a large skillet you’ll heat some olive oil and toast some coarsely ground black pepper in it. This helps develop the flavor of the pepper. With the grassy notes of the olive oil the pepper takes on an almost floral character.

You’ll then add the pasta and the blended sauce into the skillet with the pepper and oil. Stir it well, and cook it until the pasta is cooked through and the sauce is to your desired consistency.

While this is not meant to be a super saucy dish, you can add as much pasta boiling water as you need to keep the sauce thin enough to coat the noodles evenly.

The dish is ready as soon as the pasta is cooked through, though you may want to add a bit more black pepper to taste. I’ve found that packaged vegan “parmesan” cheese also makes a nice garnish.

If you want to make this ahead of time or for meal prep, I’d recommend making the sauce thinner than you otherwise would, since the sauce volume will be reduced as the pasta is stored and reheated.

Some Refreshing Salads to Serve Before the Pasta

Toast the Nuts and Seeds (Optional but Recommended)

You can substitute cashew and/or almond butter for the toasted nuts, if you like. You should use half the volume recommended for whole nuts. The flavor may be slightly different but should still be tasty.
359 shares
Previous Post: « Winter Buddha Bowl Meal Prep
Next Post: Vegan Chicken Nuggets »