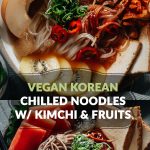 Mul Naengmyeon is a deeply refreshing Korean-inspired dish of chilled toothy noodles, cooling fruits and veggies, kimchi, and tofu in a sweet, tangy, spicy broth. It makes a soothing and invigorating meal on a hot day. (Vegan)

The Inspiration for Vegan Mul Naengmyeon

This may sound strange, but I got hooked on Korean food during the three years I spent living in China. There’s a sizable Korean population in Beijing and Korean food is fairly popular there. There was a tiny restaurant I’d go to with coworkers near my office there, where I could spend a few dollars and get a really tasty bowl of bibimbap, fried rice, or naengmyeon.

On hot days there, naengmyeon was the only way to go – the chewy sweet potato noodles were fun to eat and filling, the chilled broth was hydrating and cooling, and the toppings – cucumber and kimchi – just made it that much more refreshing.

It’s been a pretty hot summer in New York – the heat, humidity, and concrete jungle make it feel a lot like Beijing did. I constantly find myself craving cool, refreshing, sometimes sour foods. After thinking about this dish for a couple of weeks I wanted to recreate it and share it with you.

Naengmyeon, according to Korean Bapsang (a fantastic source for Korean homestyle recipes), typically uses a combination of two broths – beef broth and dongchimi broth, a light and fruity broth of radish, Asian pear, and aromatic herbs. I used vegan dashi to replace the beef broth, as it has a lovely earthy umami and makes a great counterbalance to the dongchimi-style broth.

To make the dashi, you can either simply soak dried mushrooms and seaweed in water overnight and strain as per my Vegan Dashi recipe, or make a hot and concentrated dashi and then cool it and dilute it with ice cubes as per my recipe below.

The dongchimi-style broth is pretty easy as far as homemade broths go, and it only needs to cook for 30 to 40 minutes to an hour. You can make it a day ahead, since it will need to cool, but you can also just make a very concentrated broth and add ice just like with the dashi.

You’ll have leftover boiled veggies and fruits after making the broth – they’ll be really tender but infused with the fruity and tangy aromas of the broth, so feel free to snack on them.

Traditionally, the dish is made with buckwheat noodles, and the dish works nicely with widely available soba noodles. I’ve had it with other types of noodles, though, including those made from sweet potato starch, and I really like the bouncy chewy texture. I bet shirataki noodles would work well too.

This comes down to a matter of preference and availability. But whatever you do, take care to cook the noodles until just al dente – still quite chewy – and then either submerge them in an ice bath or rinse them with cold tap water. It’s important to get the texture right because soggy noodles just won’t be refreshing.

The traditional version of this dish has cucumber and Asian pear, along with beef and boiled egg. I wanted to double down (or even triple down) on the refreshingness of the whole dish so I went with several of my favorite hot-day fruits and veggies in addition to the cucumber and Asian pear (which are a wonderful start):

Spicy, Tangy, Seasoning Paste to Tie it Together

The broth has both mild-fruity and umami-earthy components to it, and it’s a solid broth on its own. But the seasoning paste – gochujang and soy sauce – takes the broth to the next level.

It gives a little bit of chili heat, some sweetness, and some savory notes. It also gives a bright red hue to the broth which is pretty.

If you really don’t like chili spice, you can skip the paste, but I highly recommend adding at least a little bit for depth of flavor. The fruit and cold temperature really help offset the spiciness.

This dish is at its best when the broth is so chilly that it’s got bits of ice floating in it. You can achieve the icy broth a couple of different ways:

In the second case you’re going to dilute the flavor with the ice, but this is OK if you’ve boiled the broth down quite a bit. Leaving the pot uncovered and keeping the broth at a medium boil (higher than a simmer but not a rolling boil) is a good way to get concentrated broth and reduce the volume so that ice doesn’t ruin it.

The second way is also faster, so I’ve included it in the recipe below.

In the end, you’ll need 400-500 mL of broth per serving of noodles and you want to optimize between rich flavor and coolness.

When in doubt, measure your broth volume and taste it to see how concentrated it is. If it’s plenty strong and/or low on volume, add ice. If it’s not strong enough and/or has too much volume, you can boil it a bit longer.

When combining the broths, keep in mind that the dashi is much more potent and fragrant than the dongchimi-style broth. So you’ll likely want to add less dashi and more dongchimi.

Sides to Serve with the Vegan Naengmyeon

Let me know in the comments if you have questions and happy cooking! 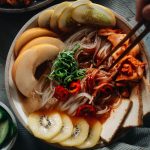