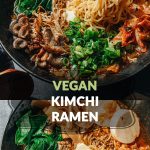 Vegan Kimchi Ramen combines things I love about both Korean instant noodles and Japanese restaurant-style ramen. It has an addictive spicy-umami broth, mushrooms, fermented bamboo shoots, and seaweed, with a touch of vegan butter on top. It’s just fun to eat, and it’s not hard to make.

What is This Vegan Kimchi Ramen?

This vegan kimchi ramen was inspired by the tantalizing Korean Nongshim Kimchi Noodle Soup and Shin Ramyun instant noodles that I ate way too much of in my earlier years. As well as Japanese ramen, which is closer to made-from-scratch and has lots of nice toppings.

Speaking of toppings, I went with some that I just enjoy eating in a bowl of ramen (menma bamboo shoots, grilled mushrooms, green onion). And I added some Korean specialities that are not typically found on ramen but are too good to not include (soft tofu [aka “soondubu”] and raw kimchi).

Altogether, it’s got the fun of a bowl of restaurant-style ramen, with some Korean pizzaz. The spiciness of the kimchi broth is balanced by the toppings and mellowed out by the pat of vegan butter on top.

The broth is a cross between the instant noodles I mentioned above and traditional kimchi soup. This isn’t a proper Korean broth recipe by any stretch (for that, I highly recommend visiting Maangchi and The Korean Vegan) but it was my deep love for Korean flavors that made me make it.

The broth has a healthy portion of kimchi and kimchi juice at its core, boosted by Korean chili powder (gochugaru), and red miso (doenjang also works), and white pepper for a certain… funky spice that isn’t overpowering.

Enhancing the umami in the background are soy sauce, dried shiitake mushrooms and kombu seaweed, ginger, and green onion. There’s a touch of maple (or other sweetener) to balance the sourness of the kimchi.

Overall it’s a delightfully complex broth that isn’t too hard to make and it all combines to make the flavor of the kimchi sing.

A Quick Note on Broth Volume

And I know the photos don’t show a lot of broth in the bowl – I did this to show off the toppings. The recipe includes about 500 ml / 2 cups of broth per serving, so don’t worry!

Traditional ramen toppings often include meat and eggs, but you still have a lot of options when making it plant-based. And the kimchi broth is pretty versatile, so you can top this basically however you want.

I chose some toppings that work especially well with the flavor profile of the broth:

I know this is a ton of toppings! But I wanted to paint a picture of what’s possible. Feel free to add or subtract as you like. See my other ramen recipes for more potential toppings.

A Tip On Vegan Kimchi

Keep in mind that much of the kimchi sold in stores contains fish and/or anchovy, though vegan kimchi is widely available.

H Mart is a great place to shop to cook this recipe (and to shop for plant-based cooking in general), and they sell very tasty vegan kimchi that’s labeled vegan.

At more typical grocery stores in the US, I’ve come across the Nasoya / Pulmone brand. Their kimchi is vegan and tastes great. I recommend the “spicy” kind over the “mild”. It’s not very spicy but has better flavor than the mild. 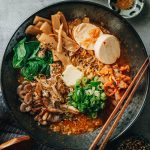 Stir in Toward End

Boil the Noodles and Blanch the Spinach

Serve the Broth and Rest of the Toppings