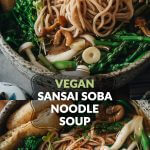 If you’ve followed me for any amount of time, you might have noticed that I share a lot of noodle soups. From ramen to udon to nabe hot pot, steamy soup with chewy noodles makes a really satisfying meal.

I also really enjoy meals that use an abundance of fresh green veggies – from green smoothies to pasta primavera. The wealth of nutrients the veggies bring, combined with the vibrant shades of color, are a mood and energy booster.

It only makes sense that I’d combine these approaches and make a noodle soup that’s overflowing with green veggies. In honor of spring and its seasonal harvest, I put together this soba noodle soup, also known as sansai soba.

The Inspiration for This Soba Noodle Soup

This dish was inspired by one of my favorite noodle shops in the city, a soba restaurant called Cocoron. They have a vegan sansai soba, which uses their excellent house-made buckwheat noodles, a rich plant-based broth, and a veggie mix called “sansai”. If you ever visit New York, do pay them a visit.

(If you live in New York, please consider ordering takeout or frozen items from them to support them during these difficult times.)

Spending 99% of my time at home lately, I wanted to recreate their sansai soba, not just so I could enjoy it myself, but so you can experience it at home as well, wherever you may be.

So How do You Make This?

There are a few components here, all of them pretty simple, but I’ll walk you through them.

If you’re not familiar with soba, they’re noodles made at least partially with buckwheat. They have a light brown color and a chewy texture with grainy bits here and there. They taste like other wheat noodles, but with a very faint sourness.

They are less refined and more nutritious than most wheat noodles. Some (but not all) are made from 100% buckwheat – that kind is gluten-free.

Outside Japan, soba most frequently come dried, but if you are lucky, you can find fresh soba made by Sun Noodle.

I used a simple vegan broth (also known as tsuyu) for this dish. Similar to dashi, the main flavor comes from dried shiitake mushrooms, two types of seaweed, and soy sauce, which combine for a fragrant, savory, earthy soup.

For some extra nuance, I added a bit of sake (this is optional), which adds a sweet aroma and enhances the other flavors. Liquid smoke adds a touch of woody smokiness and maple syrup a subtle sweetness.

Sansai is a Japanese term that refers to a mixture of vegetables and mushrooms, which were traditionally foraged. There are lots of greens and shoots and things that look wild and nourishing.

It is possible to buy sansai in a Japanese grocery store, but you don’t need to buy sansai to make this recipe! More on this below.

Since it’s spring, I couldn’t resist adding asparagus and broccolini. I included spinach and shimeji mushrooms to round it out.

To cook the veggies and mushrooms, I blanched them in a pot of boiling water very briefly to preserve the color and flavor.

Since everything else in the soup is boiled or blanched, I wanted to include something dry and crispy in the soup.  I baked aburaage (fried tofu) until crispy and it makes a perfect complement.

If you can’t find aburaage, feel free to use cubes of firm tofu instead.

What to do if You Don’t Have Sansai

You can replace the sansai with any combination of the following:

It’s helpful to get set up before you start cooking, to make things easier. I recommend a two-pot setup here:

This is a pretty long post about a fairly simple dish. My hope is that you’ll be able to use this guide to make a soothing bowl of soba noodle soup for yourself and those you care about with a flexible variety of different ingredients.

Confused? Have questions? Leave a note below and I’ll help you out.

Plant-Based Sides to Accompany Your Soba 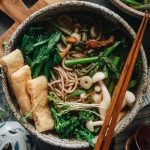 Veggies and mushrooms to blanch

Boil the noodles and vegetables

Strain and Season the Broth

If you don’t have sansai, you can increase the amounts of the other vegetables and mushrooms by 1/4 cup each.
549 shares
Previous Post: « Vegan Chicken Nuggets
Next Post: Homemade Potato Gnocchi (Vegan, 2-Ingredient) »